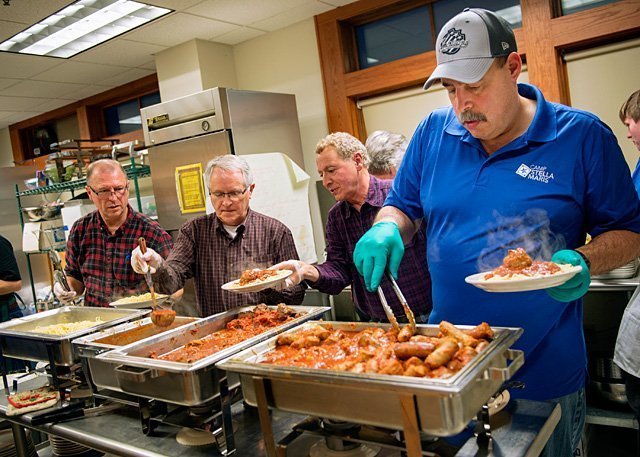 Kitchen volunteers at St. Matthew Church had the mass production of pasta dinners down to a science, arranging themselves in assembly-line fashion in order to fill plates fast. Additional helpers whisked the food into a parish hall where many tables full of hungry patrons awaited.

“I’m having a blast,” said Julie Carney, a head cook, as she and her crew maintained a steady stream of banter and jokes despite the busyness surrounding them.

Positive vibes were everywhere on Jan. 28 at “Eat for Heat” — an annual event so named because it raises funds to help folks struggling with utility costs. Featuring a mix of Italian cuisine and Irish song, the festive event was enhanced by Innisfree, a local four-piece band specializing in Celtic music. 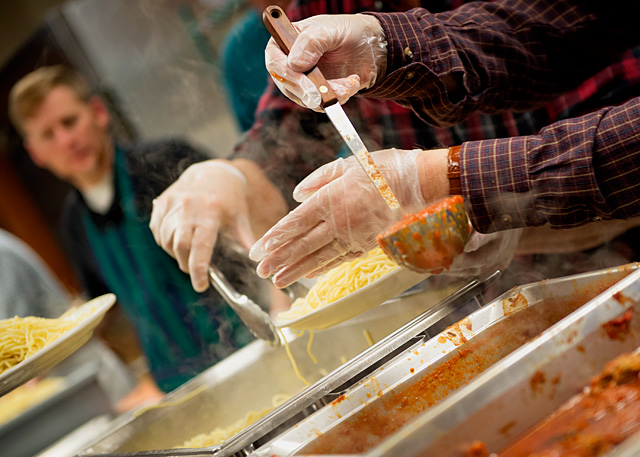 Carney’s contribution to the cause was her culinary expertise; she formerly operated a catering business. Standing in front of large pots of food on the parish-center stove, she noted that the cooking crew had been hard at work since the previous day.

Tabitha Brewster, executive director for Catholic Charities of Livingston County (CCLC), said that close to 200 meals in all were served at Eat for Heat, with the dinner and ensuing silent auction raising nearly $5,300.

“We are also seeing some additional donations come in from folks who were not able to attend, but donated anyway to support the cause,” Brewster added.

Eat for Heat proceeds allows CCLC — primarily through its Help*Works Community Resource program — to assist people with their heating bills. Brewster said her agency focuses on those in danger of having their heat shut off during the coldest months of the year. Many are unemployed, underemployed, single parents and/or senior citizens.

“There is so much need,” Brewster said, adding that she abhors the prospect of turning people away — especially those with children at home — when they seek financial help to prevent their residences from becoming unbearably cold.

“As a community, we can’t do that,” Brewster stated.

She said this concern led to the inaugural Eat for Heat in 2006 with support from Joe DiMino, CCLC’s former executive director. Alice Miller Nation, coordinator of the Jan. 28 event, noted that DiMino’s wife, Sue, sought to have St. Matthew — the DiMinos’ parish — become involved. The idea of a spaghetti dinner emerged, although Miller Nation wasn’t sure at the time if patrons would willingly shell out $20 each for a relatively inexpensive pasta meal.

”I was thrilled to find out I was wrong,” remarked Miller Nation, St. Matthew’s former pastoral associate, who is now the Newman Catholic Community associate director at Rochester Institute of Technology.

Based on its initial success, Eat for Heat quickly became an annual gathering because, as Miller Nation put it, “The need isn’t going to go away.” She said the dinner has expanded over the years to include a silent auction and the availability of take-out meals.

Brewster said dinner attendees hail not only from St. Matthew but many other parts of Livingston County as well. In addition to its fundraising aspects, she observed that Eat for Heat is a good vehicle for Catholic Charities to promote its many good works throughout the county; several CCLC staff members were on hand to greet guests as they arrived Jan. 28.

“It’s really nice just to be able to come out and talk to everybody,” Brewster said.

Brewster lauded Miller Nation as well as Jessica Pierce, Help*Works emergency assistance caseworker, for their efforts in organizing this year’s Eat for Heat. She noted that all food and auction items were donated, with numerous local organizations pitching in, and that St. Matthew provided the crews for preparing, cooking, serving and cleaning up.

“It took ‘all hands on deck’ to make this Eat for Heat event a success. Teamwork makes the dream work,” Brewster said.