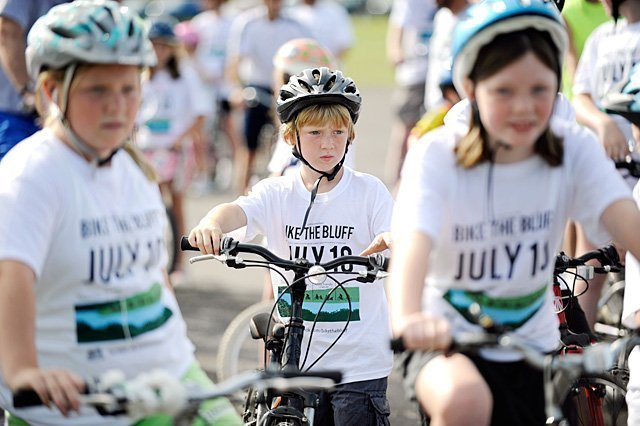 Riders prepare for the start of the first-annual Bike the Bluff fundraising bike race in July 2010.

Father Jack O’Connor, 77, does not own a bicycle. That did not stop him, however, from raising more than $4,000 for St. Michael School in Penn Yan last June by bicycling 12 miles near Keuka Lake.

Father O’Connor raised $4,342 in pledges, according to Eileen Wunder, coordinator of the school’s annual Bike the Bluff fundraiser. What’s more, he likely inspired others to participate in the fundraiser as well.

"When they see this old guy doing this they think, ‘Oh, I can do that,’" Father O’Connor surmised.

The priest was one of approximately 85 people who participated in the fifth-annual fundraiser, which was held June 21, said Wunder, who also teaches second grade at the school. The school has a handful of major fundraisers it relies on each year, and Bike the Bluff, which brought in $13,832 last year, is one of two of those fundraisers that encourages school families to be healthy and active, Wunder said. The other is the Turkey Trot, which is a 5K race and kids’ fun run that’s been held on Thanksgiving morning each year since 2012. Both of those fundraisers tie into a larger Healthy Heroes program that the school does each year, she added.

"For a week in October we do activities for the kids. We have zumba, and one day we have the kids bring in either bikes or scooters and we go for a schoolwide bike or scooter ride. The kids have acted out plays about how to be healthy heroes. This is another fun activity so we can all be healthy heroes," Wunder explained.

Father O’Connor is one such healthy hero, although he says his own healthy hero is his 84-year-old friend, Conrad Tunney, who rode the course with him. He admits the ride takes a bit of a toll on him since he only rides a bike — which he has to borrow — one day a year, but said its worth it to support St. Michael School.

"I’m all for our parochial school. I think it’s a gem of a school," he said.

The retired priest assists at Our Lady of the Lakes Catholic Community and usually gathers his pledges by appealing to parishioners at the parish’s four worship sites in Penn Yan, Naples, Prattsburgh and Stanley. After joking that he doesn’t let parishioners out of church until they make a pledge, Father O’Connor said that he only asks once at each church, but parishioners come through with tremendous support for the school. One year he even received a $1,000 donation from someone who just happened to be visiting from Ohio that weekend, but this year the pledges were a bit more modest, he said.

Nonetheless, his pledges combined to make up nearly one-third of the fundraiser’s total proceeds, Wunder said.

"He is amazing. It’s a huge percentage. I don’t know what we’re going to do when he says he doesn’t want to ride anymore," she added. "There are a few families who will get about $500 each, but no one even comes close to what he does."

Bike the Bluff participants choose to ride one of four routes, ranging from an easy three-mile ride suitable for young children to a 30-mile course that’s geared more toward serious cyclists. Like Father O’Connor, many of the school’s families choose the 12-mile ride. Regardless of which course they chose, participants in previous years have paid a small registration fee and worked toward suggested sponsorship goals. Wunder said the event’s organizers are considering raising the registration fee and eliminating the sponsorship requirement in the hopes of attracting more cyclists from out of town.

"We have a great area for bicycling. These real professionals, they don’t want to ride a flat road. They want hills and valleys, and that’s what we’ve got," Father O’Connor said.

Although Wunder and the other Bike the Bluff planners are in the early stages of planning the 2015 event, organizers of the school’s Turkey Trot 5K are entering the homestretch of their planning period. The third-annual 5K and run will be held Nov. 27 at 8:30 a.m. This year runners will follow a new course certified by USA Track and Field, and those who register for the event by Oct. 15 will receive a shirt. Father O’Connor said he will be there to cheer the runners on, but you won’t find him in the crowd of athletes streaming through the streets of Penn Yan.

"This turkey doesn’t trot," he said with a laugh.