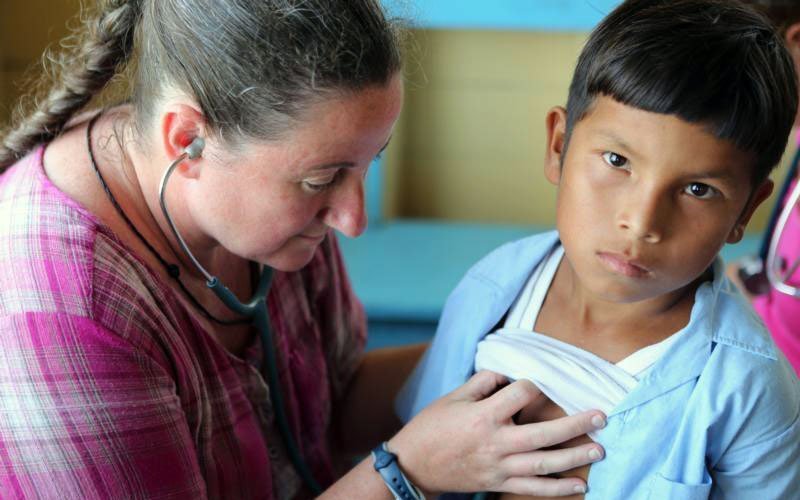 Mercy Sister Karen Schneider, assistant professor of pediatric emergency medicine at Johns Hopkins University in Baltimore, examines a boy in 2017 at a makeshift clinic in a remote area of Guyana. Everyone should have access to essential health services and no one should have to fall into poverty to obtain needed care, a Vatican representative said. (CNS photo by Bob Roller)

VATICAN CITY (CNS) — Everyone should have access to essential health services and no one should have to fall into poverty to obtain needed care, a Vatican representative said.

“We are all daunted by the disquieting fact that half the world’s population is still unable to obtain many essential health services,” he said. “At the same time, hundreds of millions are pushed into extreme poverty because they have to pay for health services entirely from their own meager resources.”

“Since everyone should have the possibility of benefiting from necessary health services without falling into poverty, the virtue of solidarity urges us to work toward this goal,” said the archbishop.

The need for universal health care coverage was a major topic at the May 21-26 meeting, and Archbishop Jurkovic thanked the U.N. leadership “for keeping it as a top priority on the agenda of the World Health Organization.”

Over the past decades, there have been great strides taken toward the achievement of universal health coverage, he said. “Nevertheless, we are still far from the desired result,” he said in his speech, which was sent to Catholic News Service in Rome.

“Progress on universal health coverage requires a strong political will and a commitment to concrete steps that improve health for all people,” he said.

Each country will have to strengthen systems “to deliver effective and affordable services to prevent ill health and to provide health promotion, prevention, treatment, rehabilitation and palliation services” that place the human person at the center, he said.

“Countries must fruitfully engage with the private sector, whose contribution to this universal health coverage is crucial,” he said. Faith-based institutions play a major role, he said, and they very often guarantee access to care “even in very remote and inaccessible areas.”

Archbishop Jurkovic also praised the assembly’s “road map” for a greater global response to the negative effects of air pollution on human health and lives.

“Avoidable environmental risk factors cause at least 13 million deaths every year and about one-quarter of the global burden of disease,” he said, according to the W.H.O. report. “Air pollution alone causes about 6.5 million deaths a year or one in eight of all deaths, placing it among the top global risks to health,” he continued.

“Efforts to advance health for all people must take account of the essential nexus between environment and health, which involves also the management of environmental determinants of health,” he said.

“Currently, environmental changes and extreme weather events are occurring at an unprecedented pace,” the archbishop said. “Many countries with vulnerable populations are experiencing the heavy burden of both communicable and non-communicable diseases.”

All sides need to dialogue about the issues since everyone is affected by current environmental challenges, he said, citing Pope Francis’ “Laudato Si’, on Care for Our Common Home,” on the environment.