Everyone must help create culture of life, says head of March for Life - Catholic Courier 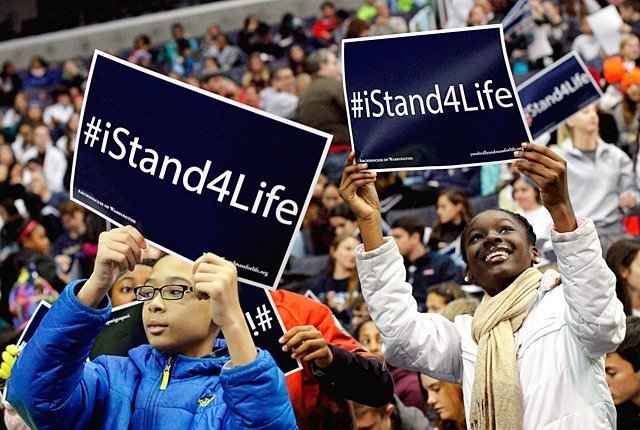 Students from St. Anthony School in Washington hold signs during a pro-life youth rally at the Verizon Center in Washington Jan. 22. Thousands of young people gathered at the arena to rally and attend Mass before taking part in the annual March for Life.

WASHINGTON, (CNS) — Jeanne Monahan-Mancini, March for Life president, answered matter-of-factly when asked why she marches each year to mark the anniversary of Roe v. Wade.

In an interview with Catholic News Service ahead of the annual event on the National Mall in Washington, she said this year’s March for Life would emphasize "everyone’s role in the creation of a culture of life."

When asked about the expected attendance at this year’s event, Monahan-Mancini wasn’t sure, but said she could safely "estimate in the hundreds of thousands."

"The National Park Service hasn’t done an exact count in several years, but we have several indicators that we use from both social media buzz and things like the trip planners on the (March for Life) website which show us that this year’s crowd is going to be very, very big."

In past years, Monahan-Mancini said, the pro-life movement has been greatly unified under the social media hashtag #WhyWeMarch.

"I love that hashtag," she said. "It not only has united the pro-life movement on a national and global scale through social media, but it’s also a conversation starter. Rather than just showing someone’s views, it explains the why; it explains why we’re willing to come and march in freezing temperatures and terrible weather, so it’s essential as a conversation starter."

About this year’s March for Life theme — "Every Life is a Gift" — Monahan-Mancini said there were "really two main points" to it.

"The first part focuses on the parents of children who receive a difficult prenatal diagnosis, such as spina bifida, Down syndrome, etc.," she explained. "The point is that every life is a gift, regardless of difficulty or disability. The average, overall abortion rate is 19 percent of children conceived, so one in five. For children that receive this prenatal diagnosis, the rate is nine out of 10. These precious little ones are being exterminated!"

"Secondly," she continued, "the theme is also meant to emphasize that everyone has a call and a mission. So my life is a gift and so is yours, Nate. Everyone at the march and in the world is a gift and has a role to play in the creation of a culture of life."

All those on the speakers’ list for the 2015 march, with "very few exceptions," were invited because of how they relate to the theme, such as Supreme Knight Carl Anderson, who will be speaking about the Knights of Columbus’ ultrasound initiative, which has just donated its 500th ultrasound machine to "really show the gift of life to parents while their child is in the womb."

Monahan-Mancini is no stranger to the claim that women at the March for Life are somehow demonstrating against their own rights.

"I get really agitated when I hear that abortion is ‘good for women,’" she told CNS. "When I hear these claims, I think about the 88-year-old woman who called into a radio show I was on, crying because she regretted the abortion she had decades ago.

"I think about the father of Holly Patterson, who was killed by the abortion drug in California. I think about the real stories of real people who have been affected by this decision. Women deserve better than abortion. They deserve to be told the truth about the psychological and physiological consequences of abortion.

She added: "One of my favorite quotes is by Mother Teresa of Calcutta, who said that ‘abortion is profoundly anti-women. Three quarters of its victims are women: half the babies and all the mothers.’"