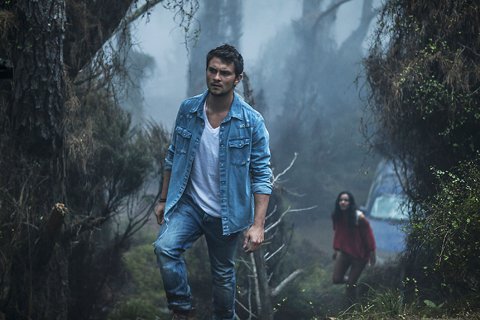 NEW YORK (CNS) — It’s a lesson Hollywood characters just never seem to learn: When you stumble across a scary-looking book of necromancy (as you do) and the notes in the margins tell you, more or less, "Whatever you do, do not read the spell on this page out loud!" … Well, don’t.

The sleeping cinematic dog not being allowed to lie in peace here is Sam Raimi’s horror trilogy that began with 1981’s almost eponymous "The Evil Dead." The evidence at hand suggests that the material’s 32-year nap has not been an instance of beauty sleep.

The story, such as it is, kicks off with something like an intervention. Scarred by the experience of nursing her recently deceased mom, down-in-the-dumps young adult Mia (Jane Levy) has fallen prey to narcotics.

To help her kick the habit, and get through withdrawal, Mia’s brother, David (Shiloh Fernandez), and a group of their friends — most prominently hippy-haired academic Eric (Lou Taylor Pucci) — have gathered at a remote cabin in the woods that formerly belonged to the siblings’ parents.

There, as opening flashbacks have shown, nasty occurrences involving a demon have transpired in the past. Thus the presence, in the cabin’s spooky cellar, of the accursed conjuring tome cited above.

No sooner has this "quaint and curious volume of forgotten lore" been rediscovered, but nosy Eric, despite all warnings, must demonstrate his proficiency with obscure languages by verbalizing its most forbidden formula. And heck, what a hex it turns out to be.

Taking possession, first of Mia, and subsequently of her companions, the revived hell-dweller Eric’s mumblings have inadvertently summoned proceeds to find creative uses for an electric carving knife, a nail gun and — how did you guess? — a chainsaw.

Predictably, the threadbare plot of director and co-writer (with Rodo Sayagues) Fede Alvarez’s bloodbath is rapidly revealed to be no more than an excuse for serial dismemberment.