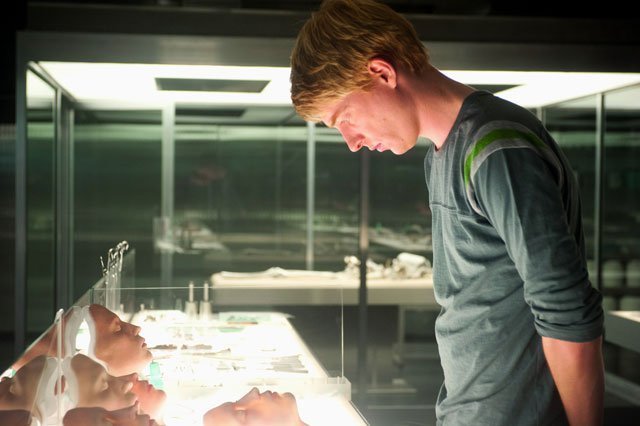 Domhnall Gleeson stars in a scene from the movie "Ex Machina." Catholic News Service classification, O -- morally offensive. Motion Picture Association of America rating, R -- restricted. Under 17 requires accompanying parent or adult guardian.
By Kurt Jensen
Catholic News Service
NEW YORK (CNS) — The crass misogyny of "Ex Machina" (Universal) overwhelms any thoughtful considerations it might have to offer on the rapid development of artificial intelligence.
Writer-director Alex Garland apparently presumes that a big naked finale doesn’t count as gratuitous nudity if all the women on display are robots. Exploitation filmmakers of an earlier generation would likely have given that idea an approving nod — followed by a cynical guffaw.
Up to that point, Garland tries to inject some wit into his science fiction scenario, which operates on the time-tested mad scientist formula.
The fevered genius in question is Nathan (Oscar Isaac), a former prodigy who at age 13 wrote the code for an Internet search engine called Bluebook. He now devotes vast sums from the seemingly bottomless wealth that resulted to his remote laboratory.
Nathan benefits from the ongoing aid of his silent servant, Kyoko (Sonoya Mizuno). But when he decides he wants to run an experiment in artificial intelligence, he summons the assistance of Bluebook employee Caleb (Domhnall Gleeson), whom he enthusiastically dubs "the most talented coder in my company."
Caleb will be overseeing the Turing Test. Named after computer genius Alan Turing, the experiment rests on the theory that if a robot’s conversation can pass for human about 70 percent of the time, the automaton qualifies as a thinking entity.
Ava the robot (Alicia Vikander) has a Plasticine face, inquiring eyes, blinking lights in her transparent limbs and a level of skepticism that Nathan may or may not have programmed into her. She also boasts a buxom, skimpily clad physique in the style of all fembots.
Caleb and Ava are always separated by a glass wall when they converse, and most of their encounters sound like awkward speed dating. Occasionally she arranges power outages to switch off Nathan’s monitoring so she can tell Caleb what she really thinks — she cogitates and reasons splendidly — of Nathan’s intentions.
Ava also likes to put on a wig and dress up like a "real woman," an avocation enabled by the supply of cosmetics and chic attire Nathan has thoughtfully assembled.
Although battery-powered, Ava fears for her "life." She’s only the latest prototype of Nathan’s creations. The earlier ones, stored in closets, have all rebelled at his need for domination. Nathan, so we’re given to understand, is such a genius that his circuitry endows his progeny with the semblance of a mortal soul.
Mad scientists never end well. And Ava, in the manner of all femme fatales, is never quite what she seems. In fact, she’s exceedingly anxious to escape and take on the world — armed with whatever wiles that might require.
The film contains strong sexual content, including numerous images of full nudity, some knife violence, a few uses of profanity and much rough language. The Catholic News Service classification is O — morally offensive. The Motion Picture Association of America rating is R — restricted. Under 17 requires accompanying parent or adult guardian.
– – –
Jensen is a guest reviewer for Catholic News Service.
Copyright © 2023 Catholic News Service, Inc. All rights reserved. Linking is encouraged, but republishing or redistributing, including by framing or similar means, without the publisher's prior written permission is prohibited.