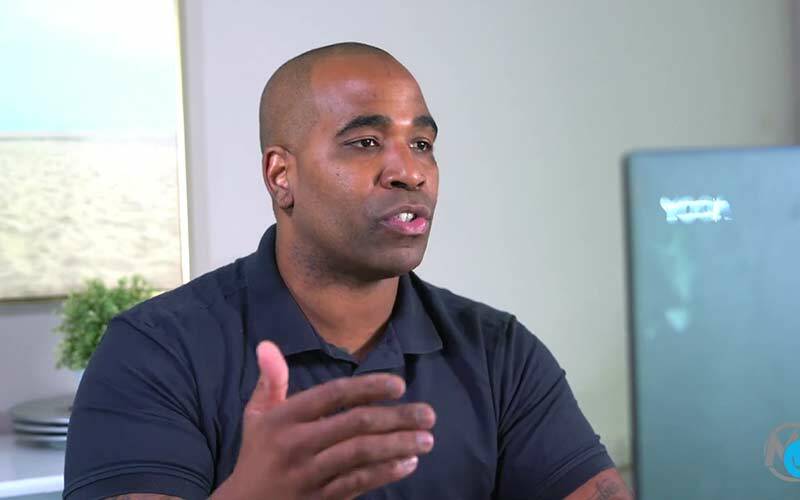 Marques Ogden is seen in a video posted on his YouTube channel that focuses on motivational speaking.

Imagine repeatedly straining with every ounce of your energy over a three-hour stretch, trying to hold off fellow 300-pound athletes pushing and clawing against you just as fiercely.

Marques Ogden rose to that considerable challenge well enough to become a standout Division I offensive lineman for Howard University in Washington, D.C.; he then logged a five-year career in the National Football League.

However, Ogden’s greatest challenge was still to come — namely, to succeed in life the way he did on the gridiron.

On Feb. 6, during a Zoom presentation to Our Lady of the Valley Parish youth-group members assembled at Hornell’s St. Ann Church, Ogden detailed the hard times he endured — many of them self-inflicted, he acknowledged — following the end of his NFL playing days in 2007. His once-successful business venture imploded, leaving him bankrupt; he abused alcohol and painkillers while living the party life; he was let go from two jobs within a five-day period; and “the only job I could get was as a custodian (working) 10 p.m. to 5 a.m. every single day, for $8.25 a hour,” he recalled.

Finally, Ogden took a long look in the mirror and began getting his life together. He took up public speaking in 2013, sharing the life lessons he’s learned in order to encourage and motivate others, especially in the area of leadership. After waiting 30 months to get his first paid engagement, Ogden, 41, has since blossomed into a sought-after speaker and has written books as well.

In addressing Our Lady of the Valley’s youths, Ogden implored them to accept responsibility and accountability; focus on goals “like a laser that can cut through a diamond”; become your own leader by being a trendsetter and not a follower; and strive for maximum effort and efficiency.

“Anybody can be a leader, if you learn what leaders need to do,” he stated, adding that individual success isn’t necessarily a mark of solid leadership: “Money, fame and notoriety just means you’ve done well. It doesn’t mean you’re a great leader.”

Ogden also said that leaders can effectively guide others in the right direction without commanding the spotlight, citing Mahatma Gandhi and Nelson Mandela as great world leaders who often operated effectively behind the scenes. “It doesn’t mean you have to be out front,” he said.

In addition, Ogden asserted that “great leaders help develop other leaders.” He cited Josh Allen, Dion Dawkins and Tre’Davious White of the Buffalo Bills — one of four NFL teams for which he played — as young leaders who are effectively mentoring even younger teammates toward becoming leaders themselves. And, he rated Tom Brady — the star quarterback who won seven Super Bowls before recently announcing his retirement — at the top of football leaders.

“Tom Brady is the epitome of leadership, focus and dedication,” Ogden remarked.

Ogden’s Feb. 6 presentation was arranged by Dave Prete, who serves as youth and young-adult minister at Our Lady of the Valley. It marked the first of two recent Zoom appearances by former NFL players following the 10:45 a.m. Sunday Mass at St. Ann Church. In addition, Reggie Walker — who played linebacker for the Arizona Cardinals (2009-12) and San Diego Chargers (2013-14) — addressed the youth group Feb. 20, emphasizing the importance of good mental health and spirituality in attaining success in life.

Prete noted that Ogden and Walker are past guests on his radio show “The Prete Is On.” The program airs each Saturday from 9 to 10 a.m. on Hornell stations WLEA 1480-AM and 106.9-FM. Prete and his cohosts, Paul Welker and Brandon Harrison, regularly have local and national sports figures as featured guests.