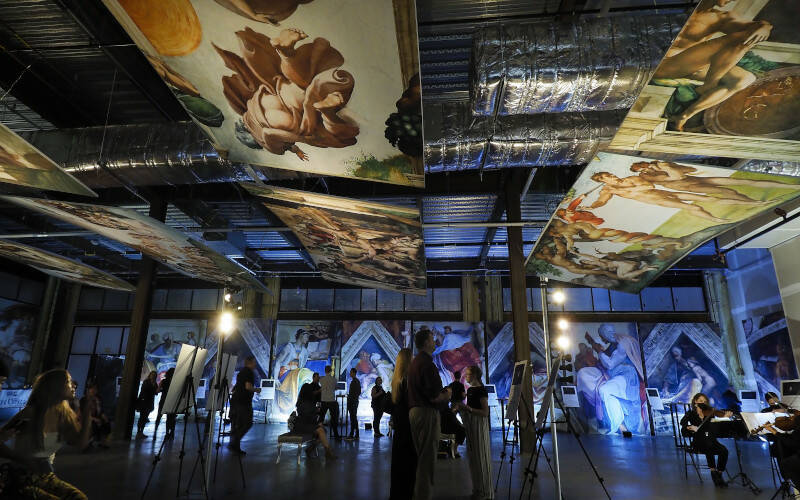 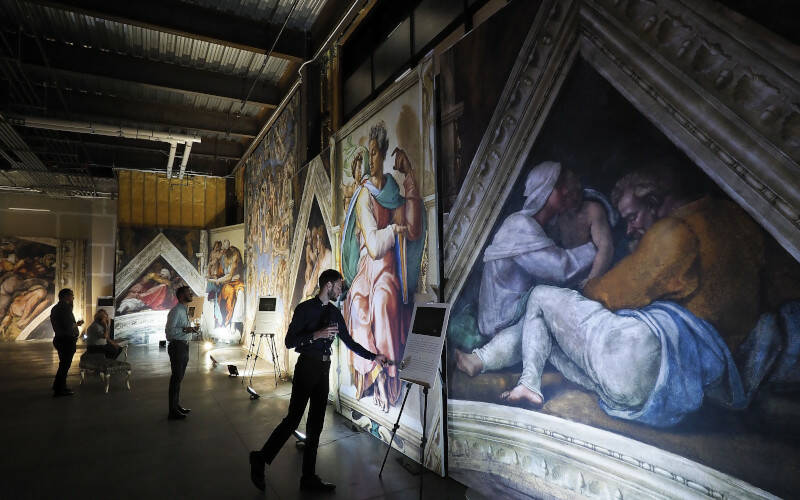 An attendee at the Oct. 7 opening of “Michelangelo’s Sistine Chapel: The Exhibition” in Omaha, Neb., activates an audio device to listen to the story behind a particular fresco. The exhibit features full-sized replicas of Michelangelo’s frescos from the Vatican’s Sistine Chapel. (CNS photo by Jerry L. Mennenga) 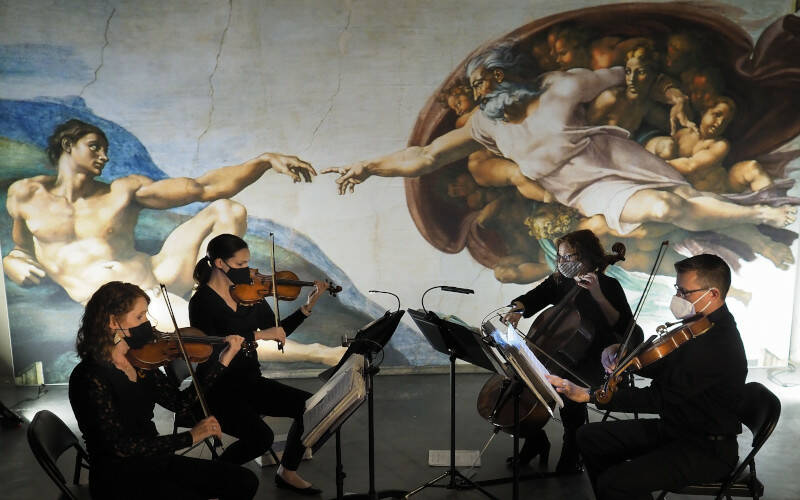 Musicians at the Capitol District in Omaha, Neb., perform in front of a replica of Michelangelo’s “The Creation of Adam” Oct. 7. (CNS photo by Jerry L. Mennenga)

“I wasn’t expecting to see the Sistine Chapel,” the parishioner of the Windy City’s St. Walter Church quipped.

He was taking in “Michelangelo’s Sistine Chapel: The Exhibition” and its 34 life-size reproductions offering visitors an immersive look at the frescoes that adorn the ceiling of the chapel at the Vatican and took Michelangelo four years to complete — from 1508 to 1512.

The international exhibit opened for almost 500 invited patrons Oct. 7 and will run until Jan. 1 at the Capitol District in downtown Omaha.

Michelangelo’s “The Creation of Adam” is the best known of the ceiling’s nine scenes from the Book of Genesis. The exhibit also includes the “Last Judgment,” which adorns the altar wall of the chapel and was completed in 1541.

The exhibit, consisting of images on large panels up to 41 feet by 41 feet, has been traveling to cities across the U.S. and countries around the world, including Canada — where it premiered in July 2015 — as well as China, Poland, Panama and Colombia.

SEE Global Entertainment of Los Angeles produced the exhibit, the brainchild of CEO Martin Biallas, who came up with the idea of taking the Sistine Chapel on the road in 2013.

“It took two years to come up with the all the components, the design, the presentation,” he said.

Biallis was on site to check out the exhibit, speak to the press and enjoy guests, who gushed with compliments.

“What excites me the most is that we reach not only Catholic people, but people of all faiths,” said Biallas, who is the son and brother of Lutheran ministers.

George Sefzik of Omaha, Mulcrone’s uncle, agreed with that assessment.

“I think the frescoes are not particularly Catholic in nature,” said the parishioner of St. Robert Bellarmine Church in Omaha. “It’s Christian. It’s the story of the Bible from the Old Testament to the New Testament.”

“I think it’s good to remember that many people weren’t literate when Michelangelo created this,” Mulcrone noted. “So, these images tell the stories of Christianity.”

Biallas acknowledged that at its heart, the Sistine Chapel frescoes communicate a religious theme, “but it reaches the art fans, as well.”

The interest in the artwork was the reason Bonnie Rhoten of Syracuse, Neb., decided to visit the exhibit.

“I’m just in awe of the scope of the size of all of this,” she told Catholic News Service. “I ask myself how Michelangelo could have accomplished all of this (ceiling artwork) in just four and a half years.”

Participants can admire Michelangelo’s true-to-size masterpieces up close, with signage in English and Spanish, at their own pace, and with the ability to capture photographic memories of the masterpieces.

“We put up additional benches so people can absorb all the beauty and messaging in the frescoes,” Biallas said. “That amenity is not a part of the actual Sistine Chapel, where people are moved in and out quickly and are not able to photograph its beauty.”

“The exhibit relies on a spacious area, and masks are suggested,” he said. “In addition, we have timed ticketing to limit capacity and social distancing guidelines.”

Biallis said that for him, “Last Judgment” resonates as he views his idea on display for other enthusiasts.

“To see almost 400 spectacular characters in that one fresco — from heaven down to hell — takes my breath away,” he said.

It’s not all the “Hollywood bells and whistles,” Biallis said, “but it does tickle me that Michelangelo was the first Alfred Hitchcock, as he put a self-portrait of himself in that fresco.”

He was referring to Hitchcock’s trademark — making a cameo appearance in his films.