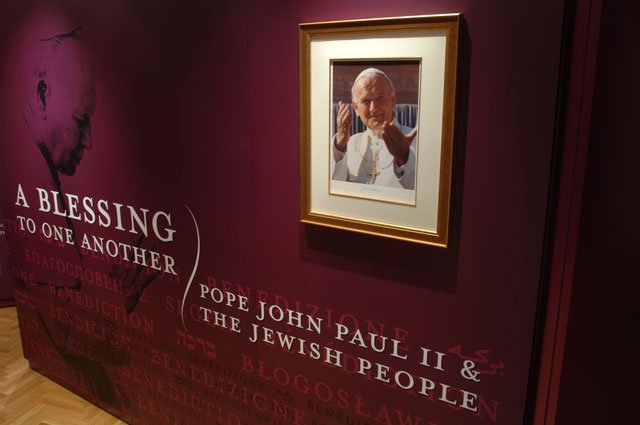 The opening panel of the exhibit, "A Blessing to One Another: Pope John Paul II and the Jewish People," is seen in the Vatican's Braccio di Carlo Magno hall. The exhibit is at the Vatican July 29-Sept. 16.
By Cindy Wooden
Catholic News Service
VATICAN CITY (CNS) — Helping to inaugurate an exhibit at the Vatican, the chief rabbi of Rome noted just how much "times have changed."
"Seeing in St. Peter’s Square the banner announcing the exhibit with an image of a pope — that’s normal — but a pope shaking hands with a rabbi? That’s not normal. It’s a sign of how times have changed," said Rabbi Riccardo Di Segni.
The banner shows the late St. John Paul II and the late Chief Rabbi Elio Toaff greeting each other in 1986 at Rome’s main synagogue. St. John Paul was the first pope in modern history to enter a synagogue.
The exhibit, "A Blessing to One Another: John Paul II and the Jewish People," began at Cincinnati’s Xavier University in 2005. Seen in another 17 U.S. cities over the years, it is open in the Vatican’s Braccio di Carlo Magno hall through Sept. 16.
Admission to the exhibit in the hall just off St. Peter’s Square is free.
Speaking at an inaugural news conference at the Vatican July 28, Rabbi Di Segni said St. John Paul "changed the course of history in a way, understanding the importance of gestures, communication and the transmission of messages in a simple and effective way."
The late pope, he said, passed from "a theological level and writing documents to a level of persons who relate to one another, even if at times it was difficult."
William Madges, a professor of theology at St. Joseph’s University in Philadelphia, who was one of the creators of the exhibit when it was at Xavier University, said the exhibit’s title comes from a letter St. John Paul wrote in 1993 to commemorate the 50th anniversary of the Warsaw Ghetto Uprising during World War II.
"As Christians and Jews, following the example of the faith of Abraham, we are called to be a blessing for the world," the pope had written. "This is the common task awaiting us. It is therefore necessary for us, Christians and Jews, to be first a blessing to one another."
Besides the photograph of St. John Paul and Rabbi Toaff, the other iconic photo in the exhibit shows St. John Paul in 2000 placing a written prayer in a crevice between the stones of the Western Wall in Jerusalem, a site sacred to Jews.
James P. Buchanan, a professor at Xavier and another of the exhibit’s creators, said by visiting the wall and placing his prayer in it — something millions of Jews do each year — St. John Paul "set a standard" for his successors. "Pope Benedict XVI did it; Pope Francis did it," he said.
The exhibit includes the zucchetto or skullcap St. John Paul was wearing that day and a replica of a section of the wall. Small copies of his prayer are available, and visitors are encouraged to write their own prayers on the back and slip the paper into the replica wall.
Madges said they will take all the prayers to the real wall in Jerusalem; 80,000 slips of prayer papers have already made the journey and another 30,000 are prepared for the journey. Those Vatican visitors leave will join the rest, he said.
—
Copyright ©2015 Catholic News Service/U.S. Conference of Catholic Bishops. www.catholicnews.com. All rights reserved. Republishing or redistributing of CNS content, including by framing or similar means without prior permission, is prohibited. You may link to stories on our public site. This copy is for your personal, non-commercial use only. To request permission for republishing or redistributing of CNS content, please contact permissions at cns@catholicnews.com.
Tags: Antisemitism
Copyright © 2023 Catholic News Service, Inc. All rights reserved. Linking is encouraged, but republishing or redistributing, including by framing or similar means, without the publisher's prior written permission is prohibited.