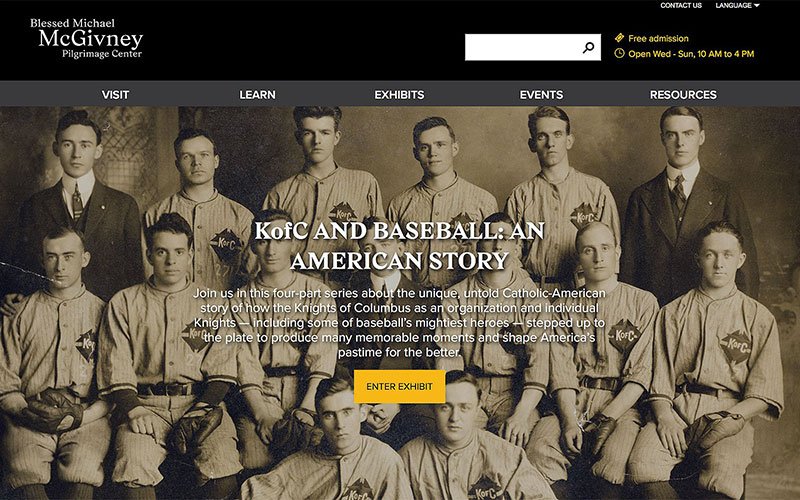 This is a screen grab from the website of the Blessed Michael McGivney Pilgrimage Center highlighting "KofC and Baseball: An American Story." The online exhibit sponsored by the Knights of Columbus shows some of the many connections between the Catholic fraternal organization and the national pastime. (CNS screen grab)

WASHINGTON (CNS) — It’s not exactly the “church of baseball,” as stated by Annie Savoy in the 1988 film comedy “Bull Durham,” but the church AND baseball.

An online exhibit sponsored by the Knights of Columbus shows some of the many connections between the Catholic fraternal organization and the national pastime.

Exhibit is a labor of love

The work has been a labor of love for Andy Fowler, who worked for the Knights for the past four years. Even though his last day was July 8, he’s still fashioning two more installments in the exhibition to be unveiled before the year is out.

“Catholics and baseball lovers might find it fascinating,” Fowler advised during a July 11 interview with Catholic News Service from his residence in Milford, Connecticut, near the Knights’ headquarters in New Haven.

The homepage includes a team photo of the Pere Marquette Council 27 baseball squad in Boston from 1915.

The exhibit has four “bases,” or chapters. “First Base” is already posted, as is “Second Base.” Fowler said he planned to have “Third Base” up in time for the annual All-Star Game, to played this year July 19 in Los Angeles, and that “Home Plate” would be available for viewing by the World Series.

There’s also a nod to Blessed Michael McGivney, the priest-founder of the Knights. No, he didn’t invent the grand old game; for that matter, neither did Abner Doubleday.

But “I found out that Father McGivney, the founder of the Knights of Columbus, played the game of baseball. He was the founder of a seminary club at the seminary in Niagara,” Fowler said.

“The postulator of Michael McGivney’s cause, he’s a big fan,” said Fowler, a member of St. Thomas Parish in Thomaston, Connecticut. “They’re very excited. I still am. I’ve been getting all these comments, externally. I just hope it brings more awareness of Father McGivney.”

He added, “It could be an avenue to raise his cause and devotion for his intercession. … I don’t think there’s an official patron of baseball. One day, by God’s grace, he could be a patron,” Fowler said. “I really do hope that.”

Babe Ruth was a member of the Knights

Some of the more well-known figures in the early days of the sport were members of the Knights, including Babe Ruth, Connie Mack and John McGraw, Hall of Famers all. Pitcher Ron “Louisiana Lightning” Guidry, a New York Yankees pitcher of more recent vintage — his career ran 1975-88, all with the Bronx Bombers — was also a member of the Knights during his playing days.

“My dad was a big baseball historian, and so was my older brother,” Fowler said. “I’ve had, like, 20 years of prior experience of listening to all these stories.”

It’s certainly rubbed off on him, and “over all these years” at the Knights of Columbus, he’s found “all this different research and factoids.” “When I started going there (to work) four years ago, I found out Babe Ruth was a Knight of Columbus,” Fowler told CNS. “I thought, maybe there’s something here.”

Fowler reels off still more. “The first hit by pitch was by a Knight of Columbus, (Orator) Jim O’Rourke,” who put in 22 seasons 1872-93 with teams in three major leagues, plus a 1904 swan song with the New York Giants.

“The lowest career ERA,” added Fowler, who confesses to being a Yankees fan, “is still owned by Ed Walsh from the Chicago White Sox, who was a Knight of Columbus. All these former major league players, and there are current Knights of Columbus MLB players. There is so much history. I mean, this fascinates me, right? So maybe someone else will find this attractive.”

Editor’s Note: The exhibit “KofC and Baseball: An American Story” can be found at https://www.michaelmcgivneycenter.org/en/baseball-intro.html.