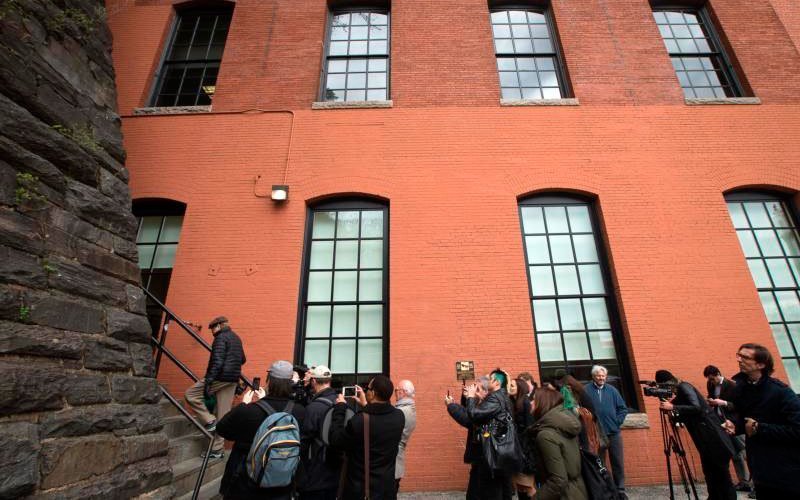 William Friedkin, director of the 1973 horror film "The Exorcist" walks up the steps on Prospect Street in Washington April 17 where Father Karras tumbled to his death in the movie. His latest work, "The Devil & Father Amorth," is a documentary about the work of the chief exorcist of the Diocese of Rome. (CNS photo by Tyler Orsburn)

WASHINGTON (CNS) — It looked just like any other group tour, except the cameras were more sophisticated than the typical smartphone.

It might have been that the “tourists” were journalists. And the tour guide was film director William Friedkin, who returned to Georgetown University in Washington, where several key scenes of his 1973 movie classic “The Exorcist” were shot.

On the tour was the Dahlgren Quadrangle, and the Dahlgren Chapel just beyond it. Friedkin, who was in Washington to promote his documentary on exorcism, “The Devil and Father Amorth,” told the assembled gaggle inside the chapel that because one scene set inside the chapel involved the desecration of a statue, “I remade a corner” of the chapel on a movie set to film that scene.

“The statue was of the Virgin (Mary). It was badly desecrated,” Friedkin said during the April 17 tour. “I would not do that in here.”

To the right of the quadrangle was the former Jesuit residence at Georgetown. Here, Friedkin played the role of a real tour guide: “George Washington spoke from this balcony,” he said. “And so did Abraham Lincoln.”

A bit later, he regaled his crowd — which at times included a few students who wondered what the big deal was, and stuck around a while after being told, “It’s the director of ‘The Exorcist'” — about a chance meeting he had in Los Angeles.

Friedkin recalled, “A man came up to me, and he told me, ‘You don’t know me, and you probably don’t remember me, but you gave me a line in “The Exorcist.'”” When the director did a little prodding, the man told him he spoke the line atop the steps of Healy Hall on the Georgetown campus, as Ellen Burstyn was in a scene from the film’s movie-within-a-movie about campus riots called “Crash Course.”

“So, are you still acting?” Friedkin said he asked the man, who replied that he had left the profession. “He was Frank McCourt,” a Georgetown graduate and real estate developer who owned the Los Angeles Dodgers for eight years and in 2013 gave $100 million to his alma mater to establish the McCourt School of Public Policy.” The school now has its headquarters at the former Jesuit residence on campus.

Leaving campus, Friedkin retraced the route taken by Burstyn’s character, Chris MacNeill, to her Georgetown home. “This is where I introduced the music ‘Tubular Bells’ by Michael Oldfield, which became the biggest-selling instrumental song of all time,” he declared.

Friedkin pointed to the Georgetown residence of James Forrestal, the secretary of defense under President Harry Truman. Forrestal had severe psychiatric problems and committed suicide by jumping out an eighth-story window at the U.S. Naval Hospital in 1949, when William Peter Blatty, who wrote the novel “The Exorcist,” was a Georgetown student.

Friedkin said Blatty used that as inspiration for the climactic scene in the novel in which Father Karras (Jason Miller) hurled himself out of the window of the house at 3600 Prospect St. NW and onto what have become known colloquially as “the Exorcist Steps” — 75 steps with from Prospect Street to M Street below, with two small landings in between. The steps were recognized in 2016 as a historic site by the District of Columbia government.

The street sign for the 3600 block of Prospect Street NW was missing from its mooring — perhaps snatched by a souvenir hunter. Friedkin said even though Blatty had written in an afterword to the novel, “The Prospect Street house doesn’t exist,” it didn’t stop book or movie fans from looking for it. The house’s owners eventually had a 6-foot wood fence built to maintain their privacy.

At the bottom of the steps, Friedkin pointed to the Key Bridge Marriott Hotel across the Potomac River in Arlington, Virginia. He stayed at the hotel during filming. “At the same time we were making the movie (Washington Post reporter) Bob Woodward was talking to ‘Deep Throat’ in the parking garage of the hotel,” he said.

During filming, Friedkin said, he would walk to work from the hotel, across the bridge and up the 75 steps. Now 82 years old, he tried it again the week before the tour, he added: “I got about two-thirds of the way up. I thought I was gonna die.”