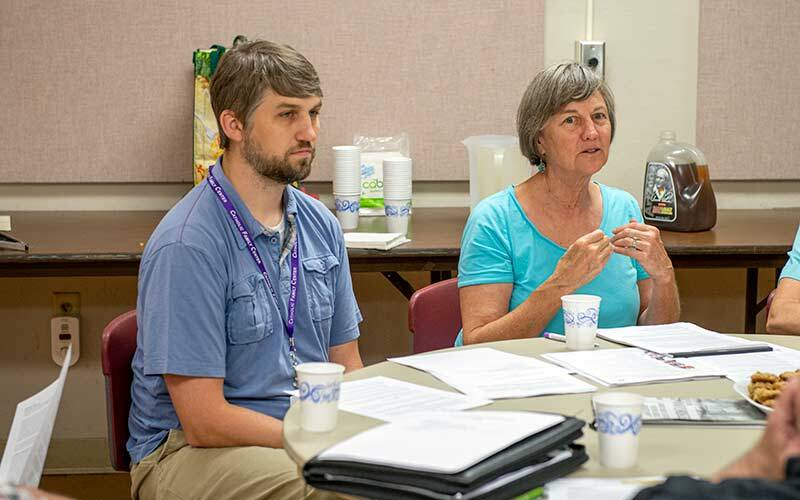 Diocese requests help to get signature for NY food program

Garnering support for New York state’s most vulnerable residents is this year’s goal for the Public Policy Committee of the Diocese of Rochester.

On the weekend of Feb. 12-13, designated as Public Policy Weekend, the committee will ask parishioners to sign petitions in support of expanding the New York State Child Tax Credit — which currently does not cover children under the age of 4 — and increasing funding for mental-health and substance-abuse services.

The petitions — which will be available in churches and online at dor.org/petition — will be sent to Gov. Kathy Hochul, who recently unveiled her fiscal year 2023 executive budget.

A state budget that addresses these two issues will be a more equitable and just budget, according to Marcus Ebenhoe, director of advocacy and parish social ministry for Rochester’s Catholic Charities Family and Community Services.

Expanding the New York State Child Tax Credit to include children under 4 would help many families avoid falling into poverty, noted Ebenhoe, a member of the public policy committee. The current omission of the state’s youngest residents is particularly concerning because having a child is “the number-one thing that throws families into poverty,” he said.

Studies have shown that a family’s lack of financial stability can have detrimental long-term effects on children’s development, including their physical, emotional and behavioral health, Ebenhoe said.

“The constant stress kind of overloads their systems, and they aren’t able to develop as they should and reach their full potential,” he said.

Ripple effects can be felt throughout the community when children and families don’t get the support they need, and the same is true when people facing mental-health struggles or battling addictions do not receive needed services, Ebenhoe said. A recent study found that more than 40 percent of New Yorkers reported anxiety, depression and other mental-health struggles during the pandemic, and that overdose deaths increased 38 percent in the last two years, he said.

Without increased state investment in behavioral health services, many people likely will struggle to receive the care they need, Ebenhoe said. Through its petition, the Diocesan Public Policy Committee is calling for a 5.4 percent increase — which it characterizes as a cost-of-living adjustment — in the state’s reimbursement rate for outpatient behavioral health services, as well as a $500 million investment in workforce development and support, he said.

Addressing these issues will benefict the entire community, he said. Supporting the petition is a way for Catholics to live out their mandate to care for the poor and vulnerable, he added.

“So many people suffer in silence, and this has an impact that affects not only the single person, but their families and their jobs and their communities and their churches as well,” Ebenhoe said. “When we don’t give them the proper support, it shows them that we don’t care, that we as a society would rather spend money on X, Y and Z instead of our own people.”

Along with the two advocacy priorities in the petition, the public policy committee also has designated global climate change and civilized discourse — especially during the 2022 election year — as educational priorities for this year. Local Catholics are encouraged to enroll with the Laudato Si’ Action Platform, an online resource offered by the Vatican in response to Pope Francis’ 2015 encyclical on caring for the environment.

The public policy committee also encourages Catholics to support upcoming legislation seeking a moratorium on cryptocurrency mining in New York. Cryptocurrency is not tangible money, but a type of digital money that is secured by encryption technology. This currency can be “mined” or produced by computers solving complex mathematical puzzles or problems.

This issue has local significance, Ebenhoe said, because a former coal plant on the shores of Seneca Lake in Dresden, Yates County, is being used as a cryptocurrency-mining facility. Inside the facility, thousands of computers work on solving problems in order to mine cryptocurrency. Environmental activists worry about the operation’s energy consumption and emissions. They are also concerned that water pumped from the lake to cool the computers is being returned to the lake at a significantly warmer temperature, which could change the lake’s ecosystems and lead to more algae blooms, he said.

As part of its focus on civilized discourse and faithful citizenship, the committee is promoting the U.S. Conference of Catholic Bishops’ Civilize It: A Better Kind of Politics initiative. The initiative is intended to help Catholics counter polarization and division, both in the church and society at large, by following the example of the Good Samaritan. The effort includes an online pledge, reflection guides and action steps.

Diocesan Catholics also are encouraged to frequently visit the Diocese of Rochester’s LifeRoc.org website and sign up for action alerts from the New York State Catholic Conference, Ebenhoe said.

Tags: Catholic Charities, Health, Life Issues, NY Catholics
Copyright © 2022 Catholic Courier, Inc. All rights reserved. Linking is encouraged, but republishing or redistributing, including by framing or similar means, without the publisher's prior written permission is prohibited.