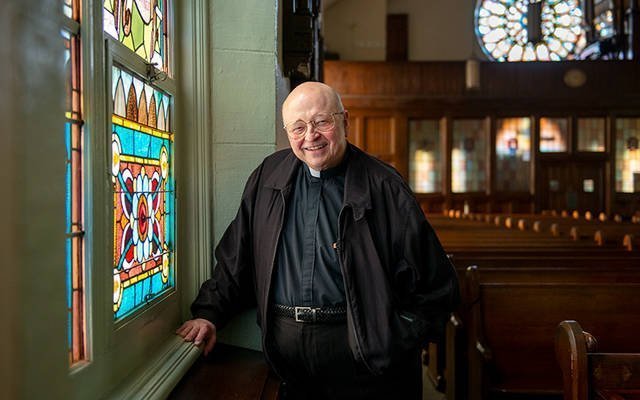 What began for Father Michael Twardzik as a sabbatical in the Diocese of Rochester wound up as a 14-year local parish assignment — a commitment that’s been as satisfying for him as it’s been lengthy.

Father Twardzik’s official tenure as Holy Family’s parochial vicar concluded in late June when he reached senior status, and he has since relocated to Geneseo. However, he continues to assist at Holy Family as needed.

“I’m willing and happy to go there. It’s the closest I have to a family,” he said.

Father Twardzik, 76, is a native of Pittsfield, Mass. He graduated from Saint Mary’s College in Orchard Lake, Mich., in 1962 and attended seminary at the American College in Louvain, Belgium. He was ordained a priest of the Diocese of Springfield on July 12, 1970, at his home parish in Pittsfield — also named Holy Family, he observed.

Father Twardzik’s first three years of priesthood were spent in brief parish assignments and at Smith College in Northampton, Mass. He returned to Michigan from 1973-75, teaching at Ss. Cyril &Methodius Seminary in Orchard Lake. He again did parish ministry in the Springfield Diocese from 1975-76 before serving as campus minister at the University of Massachusetts, Amherst, from 1976-80. He subsequently served as secretary to Bishop Joseph Maguire of Springfield from 1980-83.

Father Twardzik returned to Ss. Cyril &Methodius Seminary from 1983-87 as academic dean. The following 18 years were filled by pastorates at St. Stanislaus Parish in South Deerfield, Mass. (1987-97), and St. Francis, Notre Dame and Our Lady of Mercy parishes in North Adams, Mass. (1997-2005). In addition, Father Twardzik served as Springfield’s diocesan director of liturgy and chairman of justice and peace.

In the spring of 2005, Father Twardzik took a sabbatical at the Abbey of the Genesee in Piffard, Livingston County. He explained that he’s had a longtime affinity for monastic life and previously visited the abbey while traveling through western New York between Michigan and Massachusetts. Upon the conclusion of his sabbatical, Father Twardzik successfully petitioned to remain in the Rochester Diocese, and in 2006 he began at Holy Family. The four-church parish comprises Sacred Heart, Perkinsville; St. Pius V, Cohocton; St. Mary, Dansville; and St. Joseph, Wayland.

As he observes a half-century of priestly service, Father Twardzik remarked that he’s enjoyed his diverse responsibilities.

“I have been on both sides of the desk — in the academic world, the pastoral world, the diocesan administrative world,” he noted.