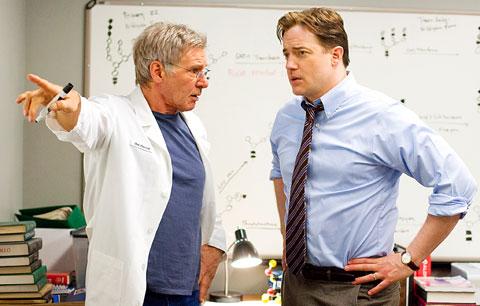 NEW YORK (CNS) — In 2004, Pulitzer Prize-winning Wall Street Journal reporter Geeta Anand published "The Cure: How a Father Raised $100 Million — and Bucked the Medical Establishment — in a Quest to Save His Children."

Now Anand’s book — expanded from a series of articles she wrote for the Journal recounting the struggle of successful pharmaceuticals executive John Crowley to overcome the rare, and once inevitably fatal, illness that afflicts two of his three children — comes to the screen under the direction of Tom Vaughan as "Extraordinary Measures" (CBS Films).

The result, though it follows a predictable arc, registers nonetheless as an engaging medical drama.

Stonehill, who drives a beaten-up old pickup and likes to have tunes by the Grateful Dead or the Band blaring as he toils away in his lab, is by all accounts on the cutting edge of Pompe disease research. But, as John discovers in an early scene, Stonehill’s work is as underfunded as it is pioneering.

So, drawing on the skills he learned in business school, John sets out on a relentless drive to raise the necessary funds. As medicine and finance combine and conflict — John’s frequently frustrating experiences seem especially timely amid the current political debate about the future of health care — the theorist and the businessman form a prickly, though ultimately productive, partnership.

Robert Nelson Jacobs’ script makes no mention of the Catholic faith that helped to sustain the real-life John through his travails. But, with the rock-solid, though sometimes concerned support of his wife, Aileen (Keri Russell), backing him up, we do observe John’s willingness to sacrifice his career and — far more agonizingly — what little time he might have left to spend with his son and daughter, in his against-the-odds but inspiring gamble.

The film contains brief nongraphic marital lovemaking, at least five uses of profanity, about a dozen crude and a half-dozen crass terms. The USCCB Office for Film & Broadcasting classification is A-III — adults. The Motion Picture Association of America rating is PG — parental guidance suggested. Some material may not be suitable for children.