Exulting in the Resurrection with Mary Magdalene - Catholic Courier 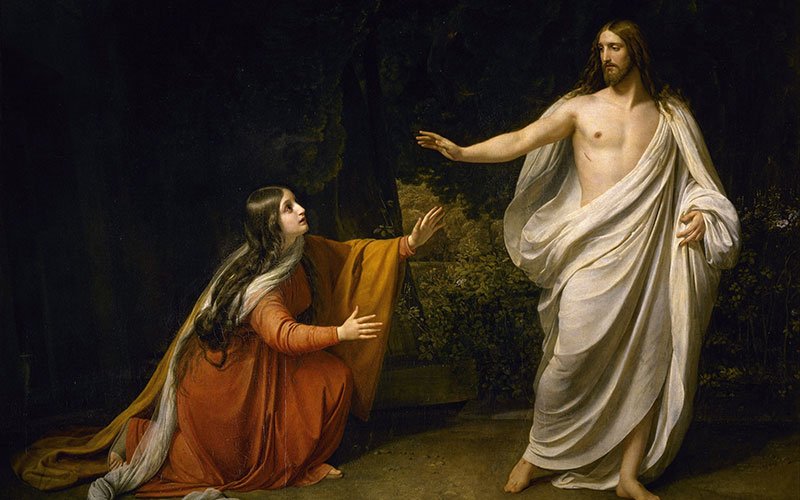 This is "Christ's Appearance to Mary Magdalene After the Resurrection" by the Russian painter Alexander Andreyevich Ivanov. (CNS photo by Wikimedia Commons)

‘Christ my hope is arisen!’: Exulting in the Resurrection with Mary Magdalene
By Lindsey Weishar Catholic News Service

During Lent, I found myself time and again alongside Mary Magdalene. She may be one of the most written-about saints in poetry and prose. She’s one in whom, to quote the “Victimae paschali laudes” sequence declared on Easter Sunday, “death and life have contended.”

Because her heart has been turned toward Christ through conversion and repentance, she becomes one of his most fervent, faithful disciples. As poet George MacDonald so beautifully puts it:

“Run Mary! lift thy heavenly voice;
Cry, cry and heed not how;
Make all the new — risen world rejoice —
It’s first apostle thou!”

It is Mary whose presence and words inform part of the “Victimae paschali laudes” (“Praise the Paschal Victim”) sequence, which heralds the Gospel on Easter Sunday. Sequences are poems of sorts that prepare the heart to receive the joy of the Gospel.

In a 2017 article for “Adoremus,” Father David Friel details the history of sequences, noting that “although sequences are not an essential component of the Mass, the sacred liturgy is nevertheless their native home.” It is believed that sequences were built out of the final syllable of the “Alleluia.”

When chanted, the final “a” often extended, meaning that a series of notes were sung for this one syllable. This extension of the Alleluia is called a jubilus, and as early as the 10th century, beginning with a monk called Notker the Stammerer, people were inspired to add words to the jubilus.

And as Father Friel says, this placement in the Mass served as a way to illuminate the Gospel text that would soon be read: “The role of the sequence can be seen not merely as filler; rather, it introduces the Gospel by the nature of its text, which often concludes with an eschatological couplet, directing our minds to the coming of Christ.”

The poetry of the Easter sequence does just that. It points us toward the fact that Christ is risen. The sequence begins with a call to thanksgiving: “Christians, to the Paschal Victim/ Offer your thankful praises!/ A Lamb the sheep redeems.”

We hear echoes of the Gospel of John and the Book of Revelation in the reference to Jesus as lamb. Shedding the grief of Good Friday, our hearts are then invited to soar with the epic line: “Death and life have contended in that combat stupendous:/ The Prince of Life, who died, reigns immortal.”

The second half of the Easter sequence turns toward Mary Magdalene. The sequence asks, “Speak, Mary, declaring/ What you saw, wayfaring.” And her answer is glorious:

“The tomb of Christ, who is living,/ The glory of Jesus’ resurrection;/ bright angels attesting,/ The shroud and napkin resting./ Yes, Christ my hope is arisen;/ to Galilee he goes before you.”

That Mary’s testament to Christ’s resurrection stems out of the exultant praise of the Alleluia is marvelous! I’m also captivated by the first-person pronoun in the line, “Yes, Christ my hope is arisen.” A woman once possessed by demons is now possessed by Christ, but even more wondrous, she possesses him as her most enduring hope.

The Easter sequence calls each of us to embrace Christ as our own.

Though this intimacy with him can feel difficult in a broken world and in our personal woundedness, the sequence is certainly a joyous knock on the doors of our hearts, an invitation to throw open these doors wide, so that we might declare triumphantly the last line of the sequence: “Christ indeed from death is risen, our new life obtaining./ Have mercy, victor King, ever reigning!”

(Weishar is a poet and freelance writer from the Diocese of Peoria, Illinois.)