Eye in the Sky - Catholic Courier 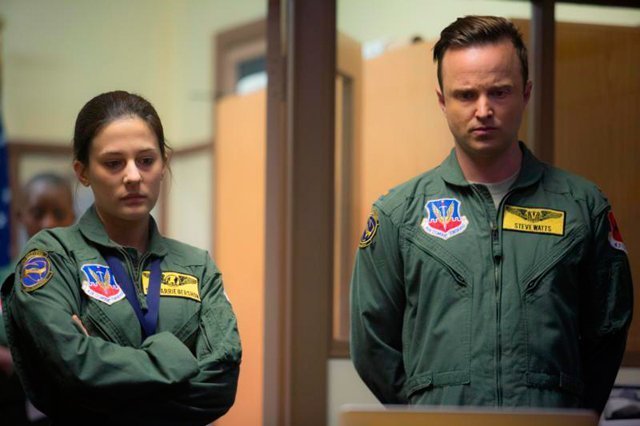 Carrie Gershon and Aaron Paul star in a scene from the movie "Eye in the Sky." The Catholic News Service classification is A-III -- adults. The Motion Picture Association of America rating is R -- restricted. Under 17 requires accompanying parent or adult guardian.

NEW YORK (CNS) — The suspenseful military drama "Eye in the Sky" (Bleecker Street) examines a sprawling topic, the war on terrorism, by focusing on the consequences a single drone operation may have on an individual life.

This is the best adult morality story on the screen since 2015’s "99 Homes" and "The Big Short" examined the damage hucksters could inflict with free-flowing home mortgage money.

Strategic decisions are easy, because the technology here works fine — too perfectly, in fact. Political choices are complicated. But the participants understand diplomatic channels and the propaganda fallout that can ensue if someone breaks or even bends the rules of engagement.

Moral quandaries, though, stop everyone in their tracks.

It sometimes gets tedious to hear every possible scenario that might result from a potential attack being discussed. But the point of Guy Hibbert’s screenplay, directed by Gavin Hood, is that these decisions are made by people with consciences who want to keep non-combatants out of harm’s way.

Weaponry includes Hellfire missiles and camera drones in the form of a bird and an unobtrusive beetle.

Personnel include soldiers and civilian spies in Nevada, Hawaii, London and Kenya. They can see everything they need to see at all times, cannot use technical glitches as an excuse, and tend to couch their jobs in banal terms.

Getting advice is called "referring up." An order to fire is framed as "prosecute the target."

British Col. Katherine Powell (Helen Mirren) oversees the joint British-American operation intended to capture her fellow national, Susan Danford (Lex King). Danford has been radicalized by Al-Shabaab militants and has joined them in a quiet corner of Nairobi, Kenya, where everyday life goes on around them.

When surveillance reveals that Danford and a subverted American are plotting a suicide-bomb attack on a shopping center, and that their timetable is a short one, Powell wants to change the misson’s objective from capture to kill.

The rest of the drama is marked by escalating tension. The realization that the extremists could leave the house at any time means the clock is ticking even as an intercontinental argument over whether a killing should be authorized — because international alliances are at stake — plays out with predictable slowness.

Steve Watts (Aaron Paul) and Carrie Gershon (Phoebe Fox), the American soldiers operating the drone from across the globe, discover a further complication: a young girl, Alia (Aisha Takow), is selling her mother’s bread in the kill zone. How then to calculate the odds of causing "collateral damage?"

The British foreign secretary is in Singapore at an arms-industry trade fair, suffering from food poisoning. The U.S. secretary of state is in Beijing at a ping-pong tournament.

As for strident White House security staffer Jillian Goldman (Laila Robins), her interpretation of American foreign policy can be condensed to the simple phrase "Get ’em!"

With stalemate at the higher reaches, the dilemma has to be solved by lower-ranking figures. They can get top-down approval, but never clarification.

Is it justifiable to risk killing a single innocent child when the terrorists, if successful, may slaughter so many more? "Eye in the Sky" compellingly portrays the real-life anguish such tough moral questions can inflict on those forced to confront them.

The film contains intense action sequences with some gore, about a half-dozen uses of profanity and occasional rough and crude language. The Catholic News Service classification is A-III — adults. The Motion Picture Association of America rating is R — restricted. Under 17 requires accompanying parent or adult guardian.