Ezra reads the laws of God to the people - Catholic Courier 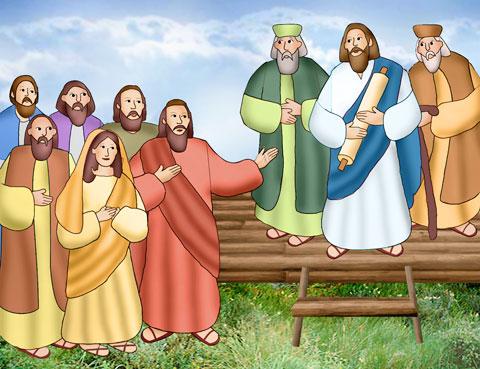 Ezra reads the laws of God to the people

Ezra reads the laws of God to the people

On the first day of the seventh month all of the people came together in the field before the place called the Water Gate. They wanted to hear Ezra, the scribe, read from the laws that God had given to their ancestors through Moses.

Standing on a wooden platform Ezra held up the scrolls so that the people could see them as he read. On either side of him were some of the elders of the people. Before he began to read, Ezra blessed the Lord and all of the people, who shouted, “Amen, amen!” in reply.

From sunrise until noon, Ezra read to the men, women and children that had assembled in front of him. Not only did he read, but he tried to interpret the Scriptures, so that everyone would know all that God had done for them, and what he wanted them to do in return.

“Today,” he said, “is holy to the Lord your God. Do not be sad, and do not weep.” Ezra added this, because some of the people were so grateful that the law was being read to them that they were crying. “Go, eat rich foods and drink sweet drinks, and allot portions to those who had nothing prepared; for today is holy to our Lord. Do not be saddened this day, for rejoicing in the Lord must be your strength!”

The Levites who were standing with Ezra said to the people, “Hush, for today is holy, and you must not be saddened.” After they had heard the laws that were read to them, the people began to celebrate and rejoice.

On the next day, the heads of all of the families joined the priests and Levites as they met with Ezra to discuss the law in more detail. They discovered that during the seventh month they should live in booths during the time of feasting. They proclaimed a decree throughout their cities, in Jerusalem and to all of Israel that said, “Go out into the hill country and bring in branches of olive trees, oleasters, myrtle, palm, and other leafy trees to make booths, as the law prescribes.” And the people obeyed the decree and made booths for themselves and their families.

This had not been done since the time of Joshua, and the people were filled with joy that they had been able to reinstate such a celebration. The feast lasted for seven days, and Ezra read from the law on each of those days.

READ MORE ABOUT IT:
Nehemiah 8

Q&A
1. Why were the people called together?
2. How long did the feast last?

The books of Ezra and Nehemiah recount the events of the Hebrew people after their exile in Babylon. The books were usually considered one by the Jewish people, but English scholars made distinctions between the material and divided the book into the two that we know. Rather than present a history of how the people rebuilt their lives and their homes, these books emphasize the religious changes that were taking place. Ezra was a priest who was part of the same line as Zadok, a priest who served David and Solomon. Because he also was an expert in the law, Ezra was charged by Artaxerxes to set up a code of laws based on the words that God gave to Moses. 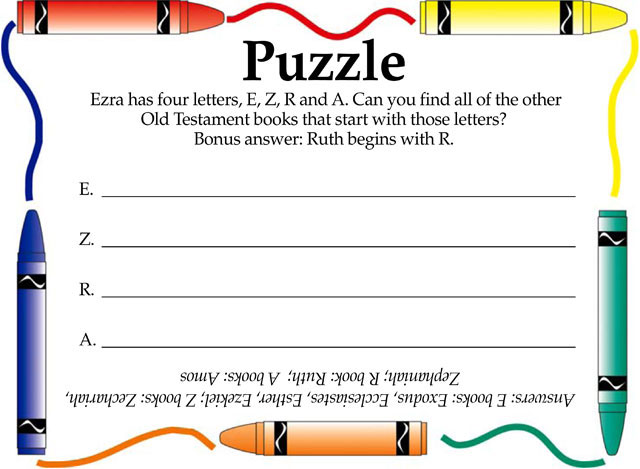