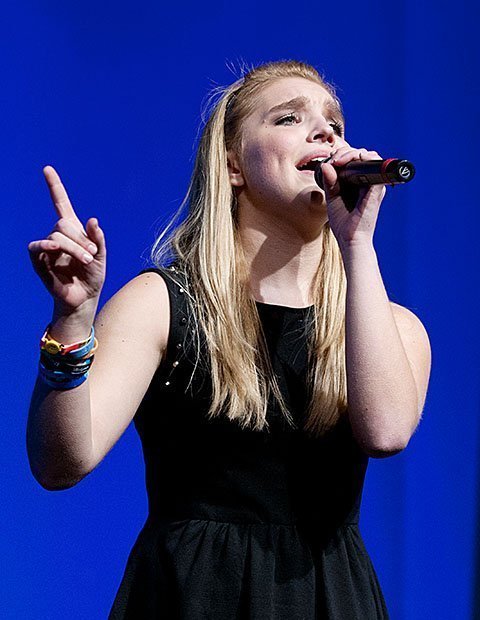 Izzy Hunzek, a 17-year-old St. John of Rochester parishioner, will be among the performers at the Catholic Courier's 125th-anniversary fair.

When the Catholic Journal — which later evolved into the present-day Catholic Courier — printed its first issue on Oct. 5, 1889, many of the Catholics in the Diocese of Rochester were of Irish heritage, and the paper printed entire columns containing news from Ireland. The newspaper’s coverage shifted as various groups of Catholic immigrants settled in the diocese and brought with them their own rich cultural traditions. Many of these cultures will be represented onstage during the Courier‘s 125th-anniversary fair, which will take place Sept. 14 at St. John of Rochester Parish, located at 8 Wickford Way in Perinton.

"We wanted to represent the different ethnic groups that were here at the founding of the diocese and also those that have enriched the diocese in the intervening years," explained Karen M. Franz, general manager and editor of the Courier and El Mensajero Católico newspapers.

Thus, the music stage at the event will feature such performers as the Celtic-folk musicians the Dady Brothers as well as the Italian-American duo Paolo and Felice. The dance stage, meanwhile will feature dancers from Borinquen Dance Theatre, both the Boland and Drumcliffe schools of Irish dance, and the Papalotl Mexican Folkloric Dance School.

Those performances are just the icing on the cake, however. Before anyone takes to a stage, Bishop Salvatore R. Matano and Bishop Emeritus Matthew H. Clark will concelebrate a special anniversary Mass at 1 p.m. in the church. The fair will begin immediately after the Mass on the parish grounds and in the parish center.

Among the musical acts will be John and Nancy Bryan, accomplished composers and recording artists who serve as music ministers at St. Joseph the Worker Parish in Wayne County. Also appearing on stage will be Izzy Hunzek, a 17-year-old St. John of Rochester parishioner who earned a recording contract with Catholic recording company Heartbeat Records after finishing as a runner up in the NCYC’s Got Talent competition held at the National Catholic Youth Conference last fall.

The Rochester Red Wings’ mascot, Spikes, will make an appearance at the fair, "RevMo" Phyl Contestable will lead a comic game of bingo and local bakeries will compete in anniversary "cake-off" inspired in part by the popularity of such recent television shows as "Cake Boss" and "Ace of Cakes." These bakeries will design and bake specially themed cakes to celebrate the Courier‘s anniversary, and fair-goers will judge the cakes based on appearance and taste.

A children’s area will feature bounce houses, bubble shows, singing, crafts and activities, as well as face-painting clowns and demonstrations by the Seneca Park Zoo’s Wegmans ZooMobile. Adults, meanwhile, will be able to browse the wares of the fair’s vendors or purchase dinner or snacks from one of the food trucks at the fair.

Admission to the fair is free, and both the Mass and fair are open to the public.