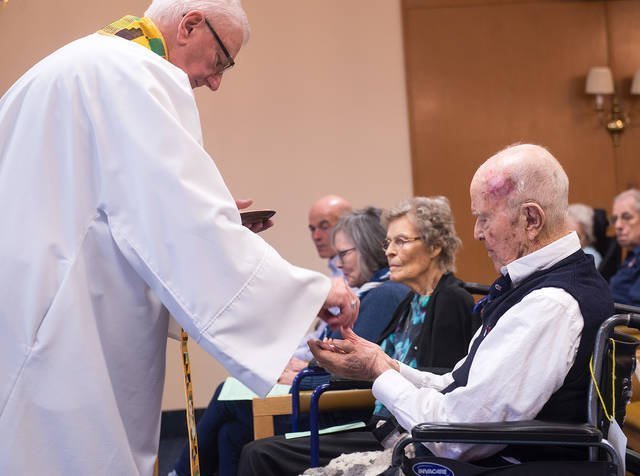 Father Ed Palumbos presents John “Jack” Reinhardt with an award April 3 for his service at Fairport Baptist Homes’ weekly Mass. Reinhardt, 95, has served as a lector in the past and currently is the usher and greeter for the liturgies. (Courier photo by John Haeger) 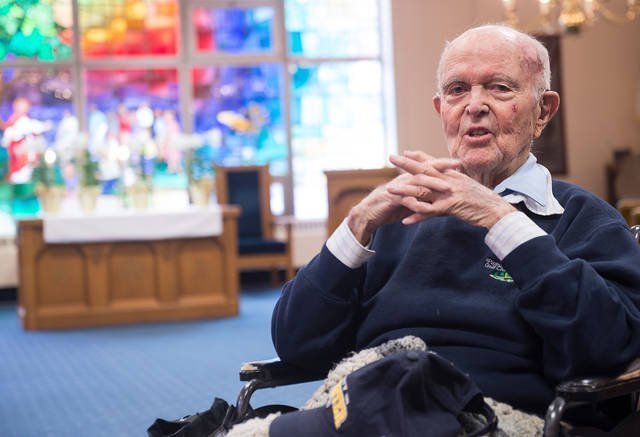 John “Jack” Reinhardt poses during an interview at Fairport Baptist Homes April 10. Reinhardt, 95, has volunteered his whole life and continues to do so at the Fairport facility. (Courier photo by John Haeger)

FAIRPORT — John “Jack” Reinhardt became an altar server at Our Lady of Perpetual Help Church in Rochester when he was 8 years old. Since that time he has served in a variety of liturgical roles at thousands of Masses, and his service spans several decades — nine of them to be exact.

Reinhardt, 95, recently was honored for his service during a small ceremony held after the weekly Tuesday-afternoon Mass at Fairport Baptist Homes, where he resides with Alice, his wife of 71 years. Several of the Reinhardts’ six children, 15 grandchildren and seven great-grandchildren were in attendance at the April 3 ceremony.

A member of Fairport’s Church of the Assumption, Reinhardt began serving as a lector at the weekly Mass at Fairport Baptist Homes several years before he became a resident, and he continued to serve in that capacity until fairly recently. These days he’s taken on a new role in the residence’s chapel.

“He is the usher and the greeter, and he’s the most enthusiastic guy ever,” remarked the Rev. Jenny Streeter, chaplain at Fairport Baptist Homes. “We’re giving him an award for being a dedicated volunteer.”

Father Edward Palumbos, pastor of Church of the Assumption, and Rev. Streeter presented the award to Reinhardt, whom Rev. Streeter said has a knack for making everyone who comes to the chapel for Mass feel like honored guests.

“Our chapel is not that big, but he welcomes everybody and brings them to a seat,” she added.

Serving others — both inside and outside of church — comes almost as naturally as breathing to Reinhardt, who was an altar server throughout his years at Our Lady of Perpetual Help School as well as Aquinas Institute. Reinhardt is grateful for his Catholic education, which he said has opened doors for him throughout his life.

“That was a wonderful thing and set the stage for a lot of the rest of my life,” he remarked.

After graduating from Aquinas Reinhardt got a job working for Eastman Kodak Co. as a tool and dye maker and studied mechanical engineering at Mechanics Institute, which later became Rochester Institute of Technology. In 1942 he enlisted in the U.S. Army’s 22nd Armored Division and soon was sent overseas and tasked with fixing and maintaining everything from hand pistols to tanks.

As the fighting intensified and the Allied troops’ losses mounted, the Army decided to transfer many of its mechanics, including Reinhardt, from maintenance to combat units. Reinhardt was retrained as a platoon leader and sent to the fighting line to join a unit that had suffered heavy losses.

“When you come back to an organization like this you’re about as welcome as a communicable disease, the reason being you’re filling in for one of the guys that was their dearest friend that got killed,” Reinhardt recalled.

Reinhardt said his Catholic faith helped sustain him throughout his four years in the army, and he volunteered as an altar server at the occasional field Masses offered for the troops. After returning to the United States, Reinhardt and his wife were married in June 1946. He studied engineering at the University of Rochester and worked for Kodak and General Electric before embarking upon a long career with Xerox Corp. The company, which at the time was known as The Haloid Photographic Company, eventually sent Reinhardt to Harvard Business School, where he earned a master’s degree in business administration.

“That (job) was a great opportunity that the Lord put in front of me, and I worked for them for 30 years. For 25 years I worked Saturday morning and never charged the company for it (because) I was so happy with what I was doing,” Reinhardt said.

Reinhardt became a lector after the Second Vatican Council, held from 1962-65, which placed a renewed emphasis on lay involvement in liturgy. Although he and his wife moved several times, they always joined their new hometown’s Catholic parish, where Reinhardt frequently could be found lectoring.

Reinhardt said he is grateful both for the chance to serve at Mass and for the priests who provide residents with the opportunity to attend Mass at Fairport Baptist Homes.

“It is so soothing, so wonderful to have something like this, and to have Father come over and bless us,” Reinhardt said.