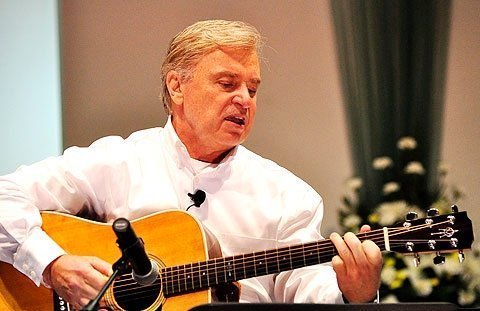 Composer and musician Dan Schutte will perform Dec. 11-12 at St. John of Rochester Church as part of the church's 50th anniversary celebration.

A noted musician and composer will kick off a yearlong celebration of the 50th anniversary of St. John of Rochester Parish in Fairport.

Schutte’s musical career was launched when he wrote and recorded music with a group known as the St. Louis Jesuits, a group of seminarians whose music became known internationally. Now Schutte is composer-in-residence at the University of San Francisco, and offers lectures, retreats and workshops throughout the U.S. and abroad.

In addition to the Advent mission, other events planned for the anniversary are: a parishioner appreciation party Jan. 13; a men’s retreat Jan. 20 and 22; a family winter carnival Jan. 21; a retreat with Capuchin Franciscan Friar Father Simeon Gallagher Feb. 12-16; a parish night out on March 10; a women’s retreat March 23-25; and a teen retreat March 30-April 1.

Bob Hurley, a high-school basketball coach at St. Anthony’s High School in Jersey City, N.J., will speak on April 27 and will lead a CYO basketball clinic April 28. Hurley, who has more than 1,000 wins and who was only the third high-school coach inducted into the Naismith Basketball Hall of Fame, will speak about the intersection of values and sports, according to St. John of Rochester’s pastor, Father Peter Clifford.

Bishop Matthew H. Clark will celebrate the 50th-anniversary Mass on June 24, and a parish picnic will follow the Mass. Also in the summer, the parish will celebrate Masses at parishioners’ homes, decorate a float for the July Fourth parade in Fairport and show an outdoor family movie on its campus. During the year, the parish also will sell cookbooks and a history books, and parishioners will attend a Rochester Red Wings game together on June 8.

In the fall, a group of parishioners will journey to England to tour sites connected with St. John Fisher and England’s other martyrs. St. John Fisher is patron saint of the Diocese of Rochester in addition to being patron of the parish. The 14-day tour in late September and early October will be led by Father Alexander Bradshaw, who was born and educated in England.

The parish will sponsor a youth mission Oct 28 with guest speaker Justin Fatima of Hard as Nails Youth Ministry. The parish will close out its year of celebration with a Thanksgiving Mass Nov. 22.

The roots of the parish date back to 1962, when Bishop James E. Kearney named the new parish after St. John Fisher, a bishop who was martyred during the reign of England’s King Henry the VIII. Bishop Fisher signed letters "John of Rochester."

The first priest was Father John Le Veque, and Masses first took place in a 50-seat chapel in Bushnell’s Basin. Parishioners were able to move into the combined school and church building on Sept. 15, 1963. Father Le Veque died suddenly in 1968 and Father Vincent Collins became the second pastor. After Father Collins’ death in 1980, Father Bernard Dollen arrived and immediately launched a drive to build a new church building, which was dedicated in 1983. Father Robert MacNamara served from 1990-92, and Father James Boyle served from 1992-2007. Father Clifford became pastor in 2007.

Up until it closed in 2008, the parish’s school was an integral part of parish life, Father Clifford said. He said the school and gym are used constantly throughout the week for a range of activities, including religious education, CYO and as space for Saint’s Place, a ministry that provides clothing and home furnishings for refugees.

As part of the parishioner appreciate party in January, the parish will dedicate its basketball court to the late Owen Hynes, a parishioner who volunteered his services as a general contractor when the parish was building its gym. This volunteer labor saved the parish hundreds of thousands of dollars, Father Clifford said.

Hynes, a concrete contractor, also was one of several volunteers who did maintenance work at the church, allowing the church to avoid hiring a janitor or maintenance person, the priest said.

"If something broke, the first call I made is to Owen Hynes," said Father Clifford, who added, "It’s impossible to replace someone like that."

Hynes was just one of many volunteers who have given countless hours to the parish over the years, according to Father Clifford. The parish has been active in raising money for Habitat for Humanity and tithes to raise money for such charities as the House of Mercy. Other active ministries at the parish include a prayer shawl ministry, men’s and women’s clubs, and Stephen Ministry, which provides spiritual care.

But one of the main distinguishing factors of the parish may be its devotion about 20 years ago to perpetual adoration of the Eucharist, Father Clifford said.

"The parish, in many respects, has been marked by its desire 20-some years ago to begin eucharistic adoration 24 hours a day, seven days a week," he said.