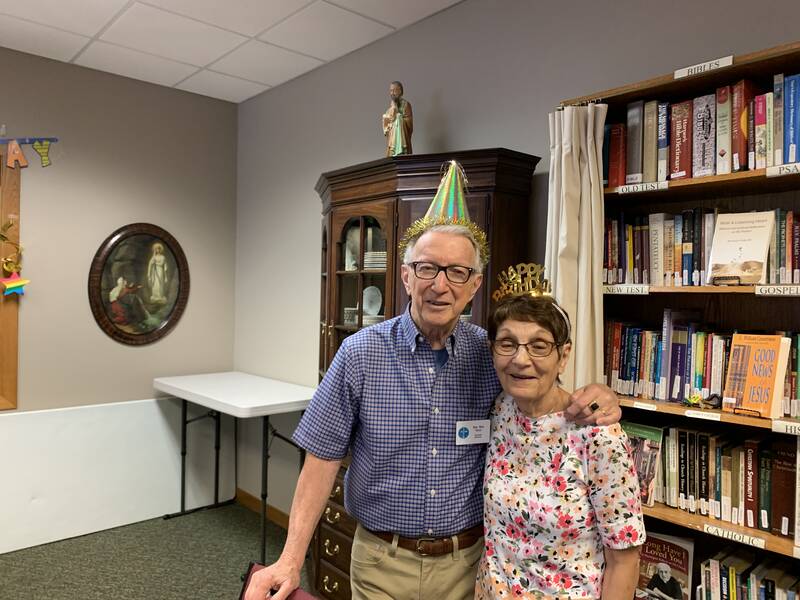 Deacon Ronald Tocci, deacon at Church of the Assumption in Fairport, poses with his wife, Cathy, during an Aug. 25 luncheon the parish hosted for his 80th birthday. (Photo courtesy of Father William “Mickey” McGrath)

The parish staff at Fairport’s Church of the Assumption surprised Deacon Ronald Tocci with a luncheon in his honor Aug. 25.

Deacon Tocci, who turns 80 Aug. 28, has been serving the people of Assumption for more than 25 years and deserved some recognition, explained Julie Dapolito-Terrell, Assumption’s secretary.

A native of Utica, Deacon Tocci worked as an electrical engineer for Eastman Kodak Co. and Xerox Corp. and as a technology professor at Monroe Community College before being ordained to the permanent diaconate by Bishop Matthew H. Clark June 11, 1994. He has served at Assumption, which is his home parish, ever since, and also served for several years as a chaplain at Rochester General Hospital.

Although Deacon Tocci reached senior status in 2017, he is still a constant presence at Church of the Assumption, Dapolito-Terrell said.

“I don’t think there’s really a day that he ever misses coming into this parish, unless he’s on vacation or out of town,” she remarked.

Deacon Tocci regularly trains new altar servers, works with parents preparing to have their children baptized and preaches at Mass at least one weekend a month, Dapolito-Terrell said. He helps with baptisms, funerals, weddings and Masses any time he’s needed, is a frequent volunteer at pasta dinners and other parish events, and until last year headed up the parish’s annual collection of backpacks for school-age children, she added.

No matter what Deacon Tocci is working on, a smile is sure to be on his face, Dapolito-Terrell said, noting that she’s never heard him say something negative about anyone or anything. Even when faced with a challenging task, Deacon Tocci chooses to look for the positive in the situation and act with kindness, she said.

“He’s everything that a deacon should be. For him, being a deacon is a way of life,” Dapolito-Terrell said. “He doesn’t just talk the talk. He walks the walk.”