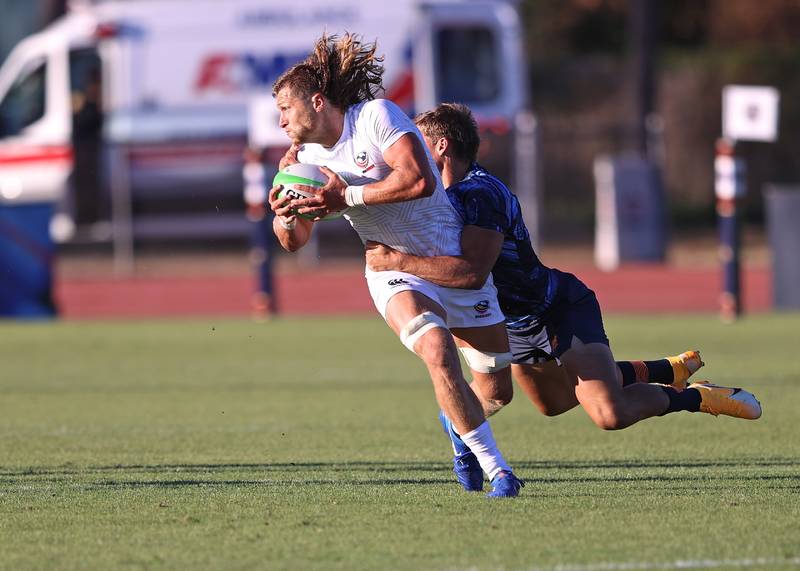 INDIANAPOLIS (CNS) — June 26 was a day of excruciating waiting for Joe Schroeder.

It was the day when the news would arrive in an email as to whether the dream he had worked so hard and so long for would come true or end in devastation — his dream of being chosen as an Olympic athlete representing the United States in the Summer Olympics in Tokyo July 23-Aug. 8.

The June morning began for the 2012 graduate of Cathedral High School in Indianapolis by attending Mass with his parents, Jim and Susan, and other family members from Indianapolis at a church in the San Diego area, where Schroeder, 28, has been training since 2017 with the goal of becoming a member of the U.S. Olympic rugby team.

Those four years have been marked by a crushing shoulder injury that required surgery and nearly a year of grueling rehabilitation. Much harder, his life has been touched by the death of his brother Will, at 22, in 2020.

The email finally came and Schroeder slipped away to his bedroom to open the news alone. He knew there were 12 spots on the team and that they’d be listed by jersey numbers. For his position those numbers were 2 and 5.

His name wasn’t next to the 2.

“At that point, I was on the edge of my seat with all of this,” he recalled in an interview with The Criterion, newspaper of the Indianapolis Archdiocese. “I knew it would be a tough situation between me and some other guys.”

But next to the 5 was his name.

He yelled the news into the other room. The celebration and the outpouring of emotion began — for Joe Schroeder, Olympian.

In the midst of all the joy, Schroeder told his mother he knew Will was looking down on him, sharing in the moment.

Every Olympic athlete has an uplifting story, but Schroeder’s path to the Olympics also includes physically lifting up people.

After playing rugby for four years at Cathedral, he went to college at Trine University in Angola, Indiana, to pursue a civil engineering degree. Trine didn’t have a rugby team so Schroeder tried out and became a cheerleader, a role that included using his strength to lift female cheerleaders in the air during games.

After graduation, he moved to Ohio to take a job with an engineering company and pursue a master’s degree in his field at Ohio University in Athens. He joined a rugby team in Columbus. His coach saw his talent and desire for the sport, so when the coach learned that one of the U.S. rugby coaches was coming to a training academy nearby, Schroeder’s coach encouraged him to go.

Schroeder’s size — 6 feet 5 inches tall and 225 pounds — caught the attention of the U.S. coach, as did his performance. Schroeder was invited to play for a week at the Olympic training center for rugby in Chula Vista, California.

After Schroeder returned home, he got a call to come back for another week. And that led to an invitation to train with the U.S. national rugby team.

“Once I got noticed, I put a lot of time into checking out the national team,” he recalled. “I’m thinking, ‘Oh my gosh, this is the team that went to the Olympics in 2016! I want to make this dream a reality, and this is the first step.’”

It also was his first step in a journey across the world. He has played in Dubai, England, France, Australia, China, Singapore, New Zealand and South Africa. And every trip and tournament intensified his desire to be part of the U.S. team when they traveled to Tokyo for the Summer Olympics.

Halfway through his first season with the team, he dislocated his shoulder and tore his labrum and rotator cuff. Nine months of rehab followed; it would be nearly another three months before he was back playing in a tournament.

The injury was tough, but the pain of losing Will cut so much deeper.

Nothing has struck Schroeder, his parents and his four other siblings harder than the sudden, heartbreaking death of Will.

“This is the toughest thing my family and I have been through,” Schroeder said. “It was really tough. He was my biggest fan.”

Will had helped Joe drive his truck cross-country from Indianapolis to San Diego and stayed with his older brother for a few days, the two of them hanging out together and loving the time they shared.

“The Olympics were supposed to happen in 2020,” Schroeder said, put they were postponed because of the pandemic. “My family was planning for it, to be there. Will was going to come.”

Now Joe is taking Will there in spirit, knowing his younger brother further fueled his Olympic dream.

So does his Catholic faith.

“The one constant in all of our lives is our Lord and Savior,” Schroeder said. “He’s helped me through all of this. I pray to him every day. He gives me the strength and the courage through the hard times and to live my dream. I couldn’t have done any of this without him.

“My Catholic faith has shaped my life in a really good way. I know it’s helped my family a lot, especially through what happened to my brother.”

Schroeder and their children have been longtime members of Our Lady of Mount Carmel Parish in Carmel, Indiana, in the Lafayette Diocese.

Following Will’s death, the family needed the support, comfort and prayers of their parish community. Their community was there for them in so many ways, the Schroeders say. They’re especially grateful to their pastor, Father Richard Doerr.

“We couldn’t have survived this without him,” Susan said.

“Faith has always been at the forefront of everything we do,” Jim said. “We know without faith we would not be anywhere. We’ve always put our faith first and taught that to our children.”

Because of COVID-19 concerns, no fans are allowed at the Summer Olympics in Tokyo. So, the Schroeder family members are prepared to watch televised or livestreamed broadcasts of Joe and his team competing.

“He’s worked so hard,” Susan said. “It’s been a difficult few years with his injury and his loss of his brother. He’s been so driven and passionate about this goal. It’s quite exciting that he’s getting to live his dream.”

“It’s just an indescribable feeling,” Schroeder said about making the Olympic team. “I put so much work into this. It’s just an unreal opportunity to represent my country, my family, God and everyone. It’s just an awesome opportunity.”