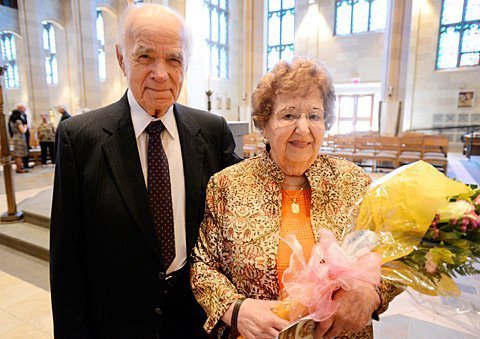 Salvatore and Dora Di Schino were recognized as the longest-married couple to attend the annual diocesan Wedding Jubilee Mass May 5.

GREECE — Sometimes, sticking to the basics can lead to great things.

Consider Salvatore and Dora Di Schino. Their priorities in married life have been faith, family and each other — a seemingly simple formula. However, the result has been extraordinary: a marriage that has lasted more than seven decades.

Salvatore, 97, and Dora, 93, were honored during the annual diocesan Wedding Jubilee Mass held May 5 at Sacred Heart Cathedral. Bishop Emeritus Matthew H. Clark, the liturgy’s celebrant, presented the Di Schinos with flowers to signify their status as the longest-married couple in attendance. They’re due to celebrate their 72nd anniversary June 28.

Both Di Schinos are Rochester natives whose parents were Italian immigrants. They first met during a high-school sorority party of Dora’s, and in the early stages of dating enjoyed playing pinochle and attending dances together.

"My brother was going out with her sister," Salvatore said.

"But that didn’t last," Dora noted.

Quite the opposite has occurred with this couple. They were married in 1941 at St. Lucy Church in Rochester, Dora’s childhood parish.

"I come from a family of seven girls and one boy, and my mother’s request was that we all got married at St. Lucy’s. My mother went every day to church," she noted.

As they settled into married life Salvatore was already building a successful career at Eastman Kodak Co., where he had started working in 1935, one year before graduating from Rochester Institute of Technology (then known as Rochester Athenaeum and Mechanics Institute). A mechanical engineer for Kodak, Salvatore served on many government projects during his 41-year career and was involved with several breakthrough innovations, including a camera that took the first picture of Earth from deep space in 1966.

Dora, meanwhile, stayed home to raise their three children. She and Salvatore placed strong emphasis on creating a faith-filled environment by sending their kids to Catholic schools and insisting that the family regularly attend church together.

"And do you know, to this day we all get together for Easter Sunday Mass and breakfast, and have a grand reunion," Dora said of their brood that includes eight grandchildren and nine great-grandchildren.

During their marriage the Di Schinos have been parishioners at three former city churches: St. Lucy, Holy Rosary and Most Precious Blood. They currently belong to Greece’s St. John the Evangelist Parish, and have resided in their Greece home since moving there from the city in 1969.

In recent years the Di Schinos have enjoyed attending the Wedding Jubilee Mass, held to honor couples who have been married 25 years or longer.

"It’s just the idea of, we met different people (at the Mass) we’ve known through our lifetime, people we haven’t seen in a long time. You say, ‘I’ll see you again next year,’" Salvatore said.

The Di Schinos, acknowledging that many of today’s marriages dissolve before reaching Jubilee Mass status, feel a greater number would endure if couples were more committed to work through conflicts — "stay together and try to work it out," Dora said.

"We had our ups and downs, but we got married for better or worse, as it says," she added. "We had our problems, but we solved them and were always there for each other."

Meanwhile, Salvatore has a succinct formula for overcoming such obstacles: "We never go to bed mad."

Rather, they take delight in each other’s company and that of their sizable family.

"They’re all up there," Dora said, gesturing toward a living-room wall covered with portraits of family group shots.

Salvatore and Dora reminisced with pleasure about their sizable 50th-, 60th- and 70th-anniversary celebrations. Yet even more special is their daily interaction with their loved ones.

"We’re very close," Salvatore said. "Now that I don’t have a car, my daughter is on the phone every day asking, ‘Do you need anything?’"

"Oh, they’re right there," Dora agreed. "I’m so happy they’re involved in everything we do."

For all his professional achievements, Salvatore said having a 72-year marriage and such a wonderful family life are his real successes.

"I think this is the best," he stated.