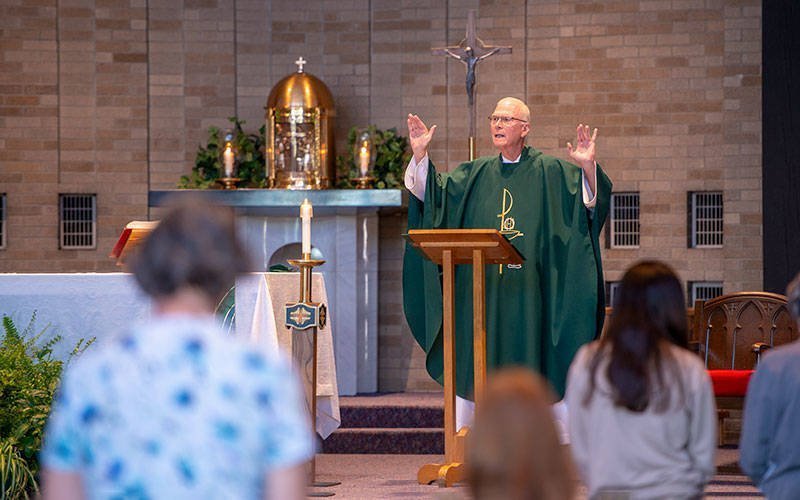 GREECE — After repeating many of the same prayers and rituals at Mass week in and week out, Catholics might not stop to reflect on the deeper meaning of what they say, do and observe during these liturgies.

That’s why Father John Firpo made a point of pausing — many times, in fact — during a teaching Mass he celebrated July 14 at St. Charles Borromeo Parish, where he is pastor.

Throughout the mid-morning liturgy, Father Firpo explained various parts of the Mass to a congregati0n of approximately 40 people as well as an online audience watching via livestream.

“It’s not just what we do, but also remembering why we do it,” Father Firpo said in explaining to the Catholic Courier his main reason for offering such a Mass.

Among the points he noted during the July 14 liturgy:

• At the start of Mass, the priest and deacon bow to the altar and kiss it ”because once Mass begins, the altar is the symbol of Christ’s presence,” Father Firpo said.

• When we make the sign of the cross on our forehead, mouth and chest leading into the Gospel proclamation, “All of us are saying through that gesture, ‘Lord, be on my mind, be on my lips, be in my heart.”

• Whenever a deacon — such as St. Charles’ Deacon Richard Lombard, who assisted Father Firpo — is present at Mass, he has the responsibility to preach the Gospel and may also give the homily. Deacons also are called to serve in a variety of ministerial roles for the church.

• The homily is a part of the Liturgy of the Word —and with the subsequent Liturgy of the Eucharist, one of the two key components of the Mass — Father Firpo explained at the start of his homily. The homily is “where we try to open up the Scriptures, to say ‘How does this word of God relate to us? How do we take this word of God and make it part of our own lives?’” Father Firpo also said that homilists should strive to make their words resonate with the congregation: “We’re not talking above the community, we’re not talking below the community, we’re talking with the community.”

• The priest washes his hands early in the Liturgy of the Eucharist after the gifts are offered. Father Firpo explained that this ritual dates back to the ancient church, when such offerings as eggs, fruits, vegetables and sacrificial animals were offered to the priest, so the priest would wash his hands before returning to preside at the altar. In addition, Father Firpo said, the washing of hands symbolizes the priest’s desire to be free of sin.

• A period of silence is observed after the distribution of Communion. Father Firpo noted that this portion of the Mass allows worshippers to thank the Lord for coming to them through holy Communion and to “spend some quiet time reflecting and pondering and thinking about how we can live as the daughters and sons of God, brothers and sisters of Jesus.”

The teaching Mass was offered as part of St. Charles Borromeo’s home-based summer faith-formation camp, with families having the option of attending the liturgy in person or viewing it via livestream. Those who came to church July 14 were asked to bring canned or boxed food items to donate to the parish’s food cupboard; in addition, they were treated to ice cream after Mass.

Father Firpo said teaching Masses can be informative for Catholics of all ages. He also noted that the July 14 Mass could serve as a refresher course of sorts for folks who have only recently returned to in-person worship, after being limited in that respect for many months by the coronavirus pandemic.

The teaching liturgy was the first of two faith-formation “field trips” the parish offered during its summer camp. On July 20, the program offered a tour of the church, delving delved into the meaning of the church’s stained-glass windows; the history and significance of its altar and tabernacle; and a close-up look at the sacristy, vestments, baptismal font, and holy oils.

The hands-on approach to faith formation is intended “to make it more interactive — getting the kids to look at things and say ‘What’s that?’” noted Mary Toot, faith-formation director at St. Charles Borromeo and Rochester’s Holy Cross Parish,