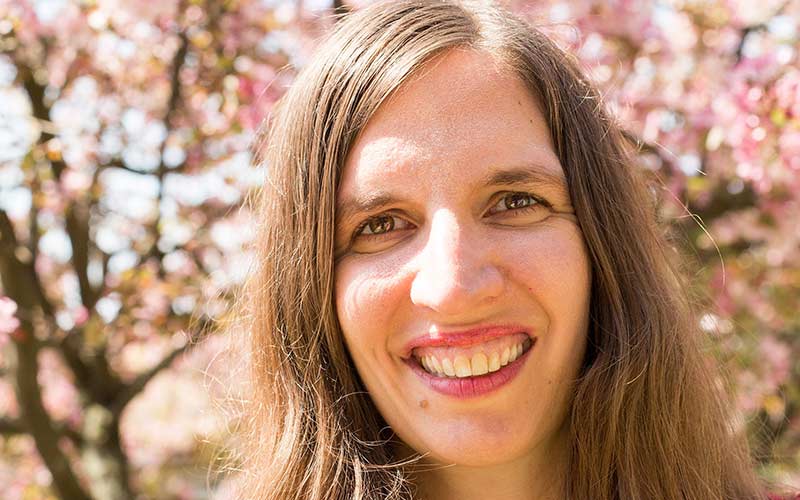 Editor’s Note: This is the second in a three-part series focusing on contemporary Catholic writers

Jeannine Marie Pitas, a Catholic writer and poet, is a Renaissance woman whose many and varied endeavors are all informed by her faith.

Part of that Catholic viewpoint is looking at the world’s challenges and seeing, not hopelessness, but opportunity for a Christian response.

The author of a collection of poetry, “Things Seen and Unseen,” Pitas has a doctorate in comparative literature from the University of Toronto, teaches literature, writing and Spanish at the college level, has written for several Catholic publications, and has one rather unique passion to which many give little thought: She translates Spanish publications into the English language.

“I see translation as a major part of my vocation,” the 39-year-old writer told Catholic News Service.

This creates, said Pitas, “an imbalance of power.”

A rough analogy might be American movies, which are seen all over the world. But in the U.S., foreign movies are often subtitled and have limited viewings.

“I’m very passionate about advocating for authors being brought into the English market,” she said.

Pitas was shortlisted for the 2018 National Translation Award for her translation of “I Remember Nightfall” by Uruguayan poet Marosa di Giorgio.

This summer, Pitas is in the process of moving from her teaching position at the University of Dubuque in Iowa to St. Vincent College, a private Benedictine school, in Latrobe, Pennsylvania. An only child, Pitas will be hours closer to her parents who still live in her native Buffalo, New York.

In addition to her teaching duties at St. Vincent’s, the move gives her the opportunity to assist with co-editing at Eulalia Press, an independent publisher of literary translations that is housed at the college.

How does her Catholicism inspire her life and work?

“There’s so much I love about being Catholic,” Pitas told CNS.

She sees the main Catholic message as Jesus’ direction to love our neighbor, which was a restating and reaffirmation of the ancient Jewish teaching.

“It’s why I love Holy Thursday,” she said, with its emphasis on Christ washing the feet of his friends.

Pitas said she loves the rituals of Catholicism, the liturgical year that often coincides with pre-Christian observances. For example, the feast of All Souls’ comes in the fall, when ancient cultures made time to remember their dead since fall in an agricultural world was seen as a time of dying.

“It was a time of thinning between the living and the dead,” she said.

Pitas has spent time with Catholic Worker communities, and she said they make retreats to mark the solstices. When the world was based on a farming lifestyle, she said, there was more of an understanding of the “rhythms of life,” which the church’s liturgical calendar helps promote. In today’s culture, a sense of that has been diminished.

Pitas volunteered at an urban Catholic Worker house from 2016 to 2018. Although she didn’t live at the Worker house, she has opened her own home to those in need.

“The first person who stayed with me was a young immigrant. I was their legal guardian for two years,” she said. Another person stayed for six months, and she offered a third person temporary housing for a year.

“I realize not everyone can do that,” she said of her willingness to share her home with strangers, “but I like companionship.”

Anyone, however, can offer hospitality in some form, said Pitas. Dorothy Day, the founder of the Catholic Worker movement, told us that welcoming the stranger doesn’t come just from a subculture or a house, she said.

“Christians have a wonderful opportunity to respond to the signs of our times,” she said.

“We have a strong responsibility to respond from a faith perspective. What would Jesus be saying? What would he be wanting us to do?”

Pitas said she loves the luminous mysteries of the rosary, introduced by St. John Paul II, because they speak to Jesus’ ministry on earth.

“And I love the beatitudes, with their message of mercy. We’re in a social climate right now where there isn’t much mercy.”

Pitas is currently working on a book project focusing on the political divide in the U.S. as seen through the Catholic Church.

“I’ve experienced the political divide within my own family,” she said.

Pitas, who went through Catholic school pre-K through 12th grade, said she hopes her book will explore how individuals raised with similar values have nevertheless come to a divide, and how people bridge this divide and find common ground.

Pitas said that Catholic writers “can feel marginalized. The publishing world can seem very secular, and the young generation is seen as ‘least religious.'”

But, she added, there’s “a real spiritual hunger and it’s connected to a cry for justice. That’s a cry for all Catholics — not just writers — to respond with faith and love.”

Learn more about Pitas at jeanninemariepitas.com.