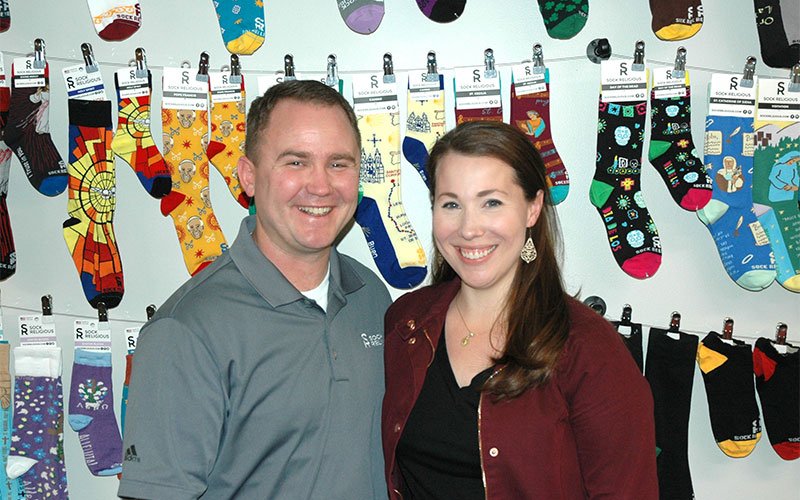 Scott and Elisabeth Williams, founders of Sock Religious, are seen in this undated photo. The company makes socks that feature images of religious figures, like Pope Francis and several saints, as well as the Sacred Heart of Jesus and the rosary. (CNS photo by John Shaughnessy/The Criterion)

INDIANAPOLIS (CNS) — Even before Scott Williams shared his unusual idea for a side business during a road trip to Chicago, his wife, Elisabeth, had learned that he is always up for an adventure.

After all, shortly after their wedding six years ago, the Indianapolis couple traveled to Rome to take part in a long-standing tradition at the Vatican.

The tradition holds that if a couple arrives for a Wednesday audience with the pope within six months of their wedding and wears the clothes they were married in (or similar attire), they will be allowed to sit in a reserved section to receive a “blessing of newlyweds” from the Holy Father.

With Scott in a black tuxedo and Elisabeth in her wedding dress on that August day in 2016, the couple met with Pope Francis, talked with him and received a blessing. They also left their meeting with the pontiff’s zucchetto, the white skullcap that a pope wears.

Scott had learned of another special papal tradition: If someone has the same size zucchetto as the pope, the pope will make a trade.

So the couple went to Pope Francis’ personal tailor in Rome and bought a zucchetto of the same size. They were the only one of the 60 couples from around the world who arrived for the papal audience with a zucchetto. Scott offered it to Pope Francis, who tried it on, and made the exchange.

It was an incredible moment in a wonderful week of adventures in Rome, and Elisabeth believed there were more to come in her life with Scott.

Socks featuring scenes and saints of the Catholic faith

Still, she wasn’t prepared for the unusual idea Scott shared with her a year later on that road trip. He wanted to start a side business of making a line of socks featuring scenes and saints of the Catholic faith.

“Scott is a big sock guy,” she told The Criterion, newspaper of the Archdiocese of Indianapolis, where the couple belongs to St. Barnabas Parish in Indianapolis. The couple has two children, ages 1 and 4.

“As we’re driving up to Chicago,” Elisabeth recalled, “he started talking about how there’s a lot of feast days in the church: ‘What if we did socks with saints on them, and I didn’t have to wear hamburgers on my socks anymore?'”

After they returned from the Chicago trip, Scott made a rough sketch of the first pair he wanted to make. A friend with artistic talent, Madison Cipoletti, made Scott’s sketch come to life — a pair of socks with Pope Francis’ image.

Selling out of socks in eight hours

Scott found a manufacturer, and he and Elisabeth decided to try to sell them at the National Catholic Youth Conference in Indianapolis in 2017. At the time, Scott was the director of youth ministry for the archdiocese and heavily involved in running the conference.

“Pope Francis was super-popular, especially with high school kids,” Scott said. “We thought if this brand is going to do something we have a test pool of 20,000 high school students to see if it has legs.”

Scott wanted to order 1,200 pairs of socks to try to sell at the conference, while his wife, who is more cautious, said they should start with 600 pairs.

“We ended up selling out in eight hours and just sat around wishing we had more to sell,” said Elisabeth, who ran the booth at the conference.

“We sold about a sock a minute,” Scott added. “We knew we had a very viable product. We set up an online shop after that. We had pre-orders for socks we weren’t going to get for another month.”

Since then, Sock Religious has grown and expanded and is now part of a larger company, Catholic Concepts, which includes other businesses. One is States of Faith, which produces T-shirts for all 50 states, with the boundaries of a state outlined in a rosary and the crucifix over the state capital.

Another is Live Liturgically, a family focused brand that revolves around a weekly, faith-related planning calendar. Catholic Concepts also offers a custom printing service for parishes and Catholic schools.

More than 80 pairs of socks have been created

Since that first pair of socks featuring Pope Francis, about 80 other pairs have been created, including ones of St. Joseph, Our Lady of Fatima, St. Francis of Assisi, St. Teresa of Kolkata, St. Joan of Arc and the Sacred Heart of Jesus. Socks featuring the image of the rosary also are customer favorites.

The company also makes faith-related coffee mugs and T-shirts that combine touches of saintliness and whimsy.

A shirt celebrating St. Peter includes his image and the phrase, “Classic Rock.” A shirt celebrating Pentecost pictures the disciples and proclaims, “We Got Spirit.” And one featuring St. Michael the Archangel advises, “Never Go Without Your Wingman.”

“We like to say the clientele for Sock Religious are people who take their faith seriously, but not themselves,” said Jeff Traylor, the company’s chief operating officer. “We come up with these funny ideas, laugh about them really hard and then make a product out of it.”

In its first three years, Sock Religious’ supply of items was imported. In February 2021, the company bought 10 sock-manufacturing machines from businesses in Indiana and North Carolina, all of which are functioning in a 10,000 square-foot facility on the south side of Indianapolis.

A staff of three people has grown to 26 employees, many of whom share the Catholic faith, including Scott, Elisabeth, Traylor and Cipoletti, who has continued to design many of the socks.

“Everything is done in-house now,” said Scott, the company’s CEO. To build the company, he left his position with the archdiocese.

“Working in full-time ministry, I always thought the most difficult part of the journey of evangelization is starting the conversation,” he said. “If we can get more people to initiate a conversation about faith and their journey, that’s going to put more people down that process of conversion and conversation.

“The tagline we’ve always used with Sock Religious is ‘starting conversations through joyful products.’ Our products don’t evangelize, people do. We just want to start conversations on faith and the lives of the saints. … It’s also become a way for people to get through difficult times,” he said.

“Whether it’s a treatment for cancer, a surgery, giving birth, job interviews — people have worn them, leaning on the saints in difficult times. We know people have been buried in our socks, which is a wild thing to think about,” he added.

“But like anything else,” Scott said, “people depend on saints to get them through difficult times, and this is just a way that has manifested itself in a physical product.”