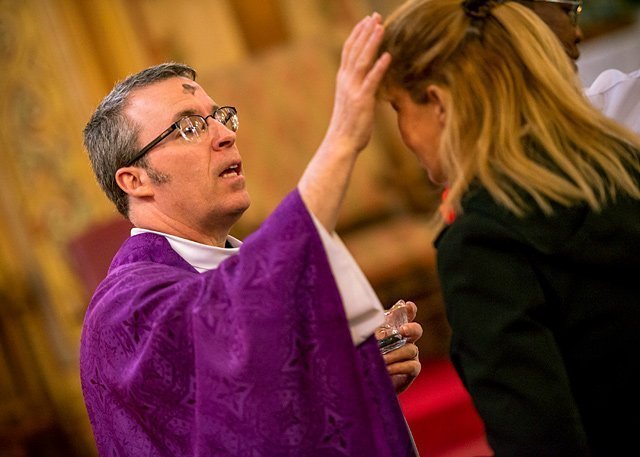 Father William “Mickey” McGrath distributes ashes during an Ash Wednesday Mass at Rochester’s St. Michael Church March 1. Several parishes are using the themes of the V National Encuentro as a jumping-off point for reflections during Lenten gatherings this year.

Local parishioners will be asked to step outside their comfort zones to take part in a national encuentro — or “encounter” — process at their parishes this spring.

Participants will be asked to evangelize and reach out to their communities, a task that may make some participants uncomfortable, acknowledged Lynette Saenz, director of the Cultural Diversity Office for the Diocese of Rochester. The outreach component will be done in stages, with participants initially approaching family and friends or coworkers before branching out to unfamiliar members of their faith communities. From there, they may branch out to people they don’t know, Saenz said.

The process will offer opportunities to observe before connecting, she said. For example, a person can go and sit at the Rochester Public Market and use their senses to try and figure out what might be happening with people they see, Saenz said. Then, perhaps after a couple of weeks, they may be willing to approach the people they have observed.

“It’s very ambitious to actively go out and consult with people” about their interactions with the church, Saenz said. “It’s an extra step and it’s wonderful. But it’s uncomfortable for a lot of people. That’s (also) what I love about this process. … Because it’s not something we are taught to do.”

The effort is part of local preparations for the V National Encuentro, a national church gathering scheduled to take place in Texas in 2018.

Several parishes are using the themes of the V National Encuentro as a jumping-off point for reflections during soup suppers or other Lenten gatherings this year. “Missionary Disciples: Witnesses of God’s Love” is the 2018 theme for the national encuentro, a process used for the last 40 years to develop Hispanic ministry in the U.S. Catholic Church, according to information from ENAVE, the National Team of Accompaniment organizing the event (see http://vencuentro.org).

And though the encuentro process initially developed as a response to a growing Latino presence in the U.S. church, Saenz noted the next encuentro aims to involve all Catholics in responding to the growing diversity of the church.

More than 20 diocesan parishes planned to undertake the encuentro process through group retreats of Hispanic and non-Hispanic parishioners during Lent, she said. Some of the parish encuentro reflections will continue into the Easter season due to severe storms in March that cancelled some events, parish officials said. Also, a group of Catholic high schools, local colleges and even the Livingston County Jail will present encuentro gatherings as part of a parish-level process that ends in June, Saenz said.

“Any way that we can better serve all members of our parish and the needs of our community on a whole is a win-win for all,” added Ann Holstrom, a Peace of Christ parishioner taking part in the Rochester parish’s encuentro.

“This process gives us Latinos the opportunity to get more involved in the mission of the church,” said Trias, who moved to Rochester from Puerto Rico in 2000. “But not just Hispanics, non-Hispanics as well. We are all part of the same faith community. We can no longer be separate but work together to bring the Good News to all but especially those who have left the church.”