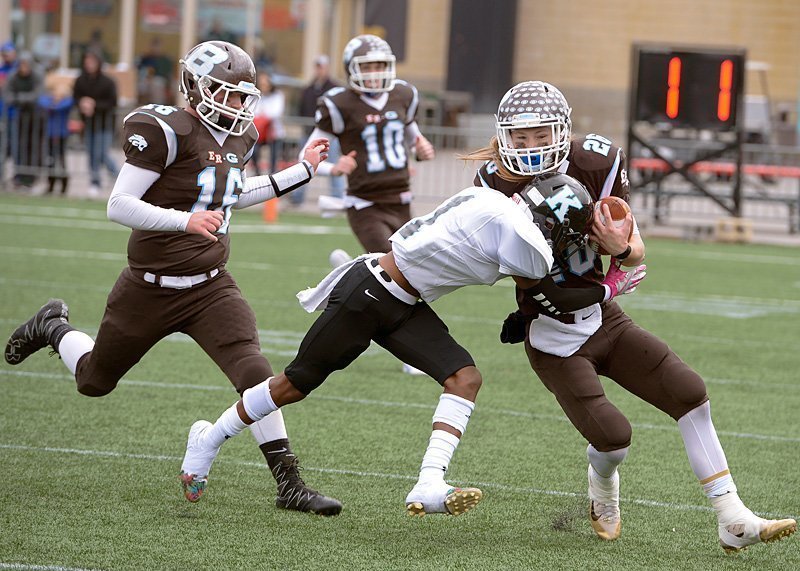 With championship showings in several sports, Catholic high schools in the diocese amassed an abundance of team and individual trophies this fall.

* Bishop Kearney football, which earned the Section 5 Class C title and advanced to the state Class C semifinal round. The Kings scored a 36-34 win over East Rochester/Gananda in the sectional final Nov. 5, as Dahmir Pross ran for 281 yards on 35 carries, including three touchdowns, and Matt LaRocca hooked up with Asfa Sill on TD pass plays of 52 and 43 yards. Kearney went on to another close win, 40-38, over Cleveland Hill of Section 6 in state quarterfinal play Nov. 12, rallying from a 10-point fourth-quarter deficit. Pross scored all six of Kearney’s touchdowns in that game, finishing with 165 yards on 28 rushes. The Kings’ season was finally ended by Newark Valley of Section 4, 34-14, in state semifinal action Nov. 19. BK’s final record was 11-1.

* Elmira Notre Dame girls’ soccer, which earned the Section 4 Class C championship with a 4-2 victory over Lansing in the title game Oct. 29 behind two goals from Laurel Vargas and single goals from Mackenzie Mahajan and Jillian Perreault. The Crusaders had reached the final by winning 5-1 over Unadilla Valley in quarterfinal play Oct 22, as Taylor Gray had three goals and Vargas added two, and 2-0 over Groton in semifinal action Oct. 26, as Perreault scored both goals. ND’s season was halted in the state quarterfinals by Little Falls of Section 3, which scored a 2-0 win Nov. 5. The Crusaders ended up with a 17-3-1 record.

* Notre Dame boys’ soccer, which shared the Section 4 Class B title. The Crusaders played Oneonta to a 0-0 tie in the final Oct. 29, then advanced to state-tournament play by winning a shootout 3-2. ND then lost 1-0 to Syracuse Westhill of Section 3 in the state quarterfinals Nov. 5. The Crusaders’ final record was 16-1-2 as their 57-game unbeaten streak, dating back to 2013, finally ended. Notre Dame was last year’s state Class C titlist before moving up to Class B this year. In earlier post-season play, ND won 5-0 in the sectional quarterfinals over Waverly Oct. 21 behind two goals from Nick Steed and 7-0 in the semifinals over Windsor Oct. 25, as Mitchell Vargas had three goals and Aidan Sharma added two.

* Our Lady of Mercy’s Julia Andreach, who advanced all the way to the state girls’ tennis singles final. She earned her way into states by winning the Section 5 state-qualifying final Oct 22 over Pittsford Mendon’s Sarah Bodewes by scores of 6-1, 4-6 and 6-3. Andreach then reached the state championship match before falling 1-6, 6-3, 6-4 to Caitlin Ferrante of Yorktown (Section 1) in the singles final Oct. 31. Andreach, a freshman at Mercy, was a state semifinalist last year.

* McQuaid Jesuit boys’ volleyball finished as runner-up in the Section 5 Class A playoffs. The Knights recorded a pair of three-set sweeps — in the quarterfinals over Churchville-Chili Nov. 1, and in the semifinals over Fairport Nov. 5. McQuaid then fell to Penfield in a five-set thriller in the title match Nov. 10 by scores of 25-15, 16-25, 18-25, 25-22 and 25-16. The Knights, who were defending state champions, posted a final record of 16-4.

* Aquinas Institute girls’ soccer reached the Section 5 Class A title match despite only being the No. 7 seed. The Little Irish won 3-0 over Irondequoit in first-round action Oct. 19, 2-1 over Pittsford Sutherland in the quarterfinals Oct. 22 and 5-0 over Pittsford Mendon in semifinal play Oct. 26 before their Cinderella bid was halted with a 2-0 loss to top-seeded Spencerport in the title game Oct. 29. AQ’s final record was 10-6-4.

* Aquinas’ cheerleaders placed second in the Division 2A small-schools classification at the Section 5 fall championships Oct. 29.