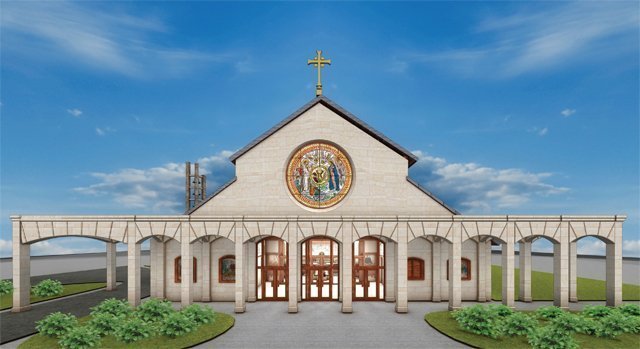 This photo, prepared by Rohn & Associates Custom Studio, Inc. shows design of the exterior of the new St. Pius Tenth Church. Groundbreaking for the new church is scheduled for October.

CHILI — After nine months of planning, groundbreaking for a new St. Pius Tenth is scheduled for October, and the church’s doors could open as early as Advent 2017.

The former building on Chili Avenue was destroyed by a fire in January 2015. Due to extensive structural damage, the building had to be razed and rebuilt.

For the past nine months, parish and diocesan officials have worked on plans for rebuilding the church, and officials shared an update on the process during a July 13 news conference.

"We are envisioning a beautiful church for God, for Jesus and for the people of St. Pius the Tenth," said Father Paul Bonacci, parochial administrator.

The new building was designed by Rolf Rohn of Pittsburgh’s Rohn & Associates Design Inc., according to longtime parishioner Brian Porter, who chairs the design committee. He noted that the design adhered to guidelines outlined in the U.S. Conference of Catholic Bishops’ document "Built of Living Stones: Art, Architecture and Worship."

The new edifice will be "traditional in every sense, truly Catholic … and will give glory and praise to God," Porter said. 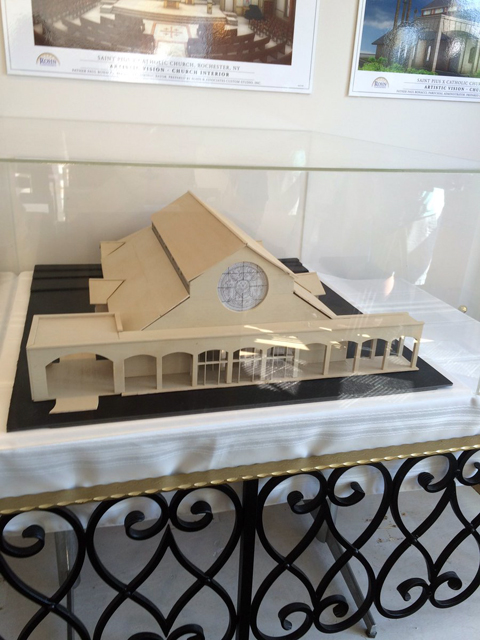 Courier photo by Annette Jiménez
A rendering of the new St. Pius the Tenth Church. Groundbreaking for a new St. Pius Tenth is scheduled for October.

The new church will seat 800, and pews will be in a semicircle shape, he noted. The design will incorporate a better audio system and provide clear sight lines for the faithful to actively participate at Mass. These features were key considerations for parishioners who participated in town-hall meetings during the planning process, he added.

Bernard Grizard, director of the diocesan office of Pastoral Services, praised all those who participated in the planning process.

"The diocese and Bishop (Salvatore R.) Matano have been incredibly moved by the dedication not just of the committee but of all the parishioners involved in the planning and rebuilding of the church," said Grizard, who serves as the liaison between the diocese and the parish during the project.

Construction costs for the new structure will total about $4.5 million, Porter said. After depreciation and deductibles, Father Bonacci explained that the parish will receive $2.5 million from its insurance policy. In June, the parish began the public phase of a capital campaign, which had begun about two months earlier, he added. About $2 million in pledges and donations have been raised so far, he said.

"We have had an outpouring of generosity from day one," Father Bonacci remarked.

EDITOR’S NOTE: For more information or to donate to the rebuilding project, visit saintpiustenth.org.