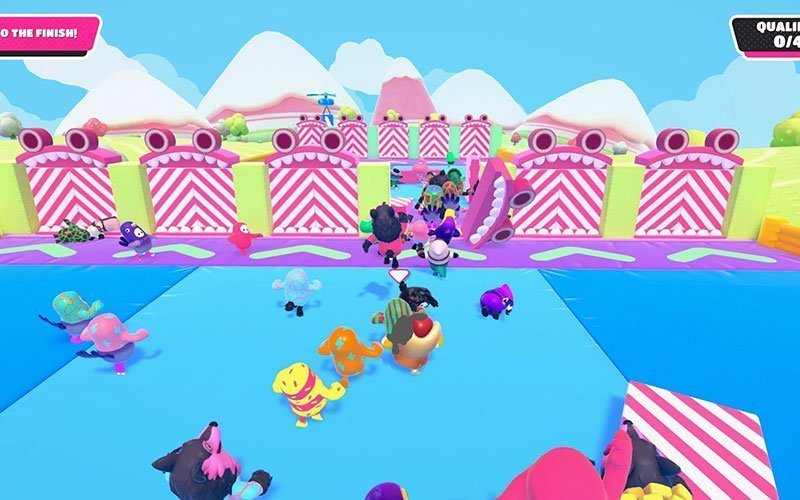 The delightfully silly result is both unusual and entertaining and offers clean fun for all ages.

Reminiscent of the 2008 TV program “Wipeout,” this online multiplayer features 60 jellybean-shaped characters competing in three to five rounds of a game show. Each successive round whittles down the number of participants until only one is left standing. There are over 24 game modes, some of which are team-based.

Each round involves a zany attempt by the title characters to complete set objectives — grabbing a tail off another competitor, perhaps, or dodging giant pieces of fruit in a race. Some minigames challenge contestants to outrun a river of pink slime, others see them trying to navigate spinning turntables that can send them flying. Those who fail to achieve the objective are disqualified from the next round.

The standout aspect of this absurdly addictive title is the unique path to victory it charts. Winning isn’t about who has the most skill, but who enjoys the most luck.

There is minimal violence — if it can even be called that. Gamers, for instance, may try to bounce rivals off the field to eliminate them from play.

Each game is set up via randomized matchmaking. But players can opt to create teams with people on their friend list instead. If a teammate is eliminated, he or she can choose to sit the rest of the competition out as a spectator or return to the lobby and start afresh.

Server stability is currently a weak point in the design, since gamers can be waiting in the lobby for a new match only to find themselves disconnected. Additionally, a few of the game modes feel imbalanced compared to more sophisticated challenges.

Participating in a round earns players a form of in-game currency called “kudos,” while winning earns them “crowns.” These can be exchanged in the store for new outfits or for “emotes,” i.e., a way for players to express themselves in-game. Emotes can be as simple as a wave or as advanced as a popular dance move. Currency can also be purchased with real-world money through in-game transactions.

“Fall Guys: Ultimate Knockout” is colorful and wacky. Yet it allows for a healthy spirit of competition in a context almost entirely free of violence. That’s a refreshing change of pace gamers of all ages can welcome.

Playable on PlayStation 4 and Windows.