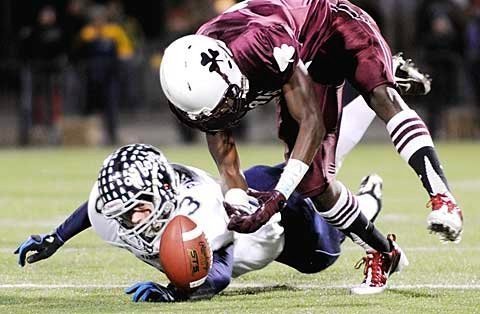 Led by two state team championships from McQuaid Jesuit and a state title-game appearance by Aquinas Institute, the fall season has been wildly successful for Catholic high-school teams in the diocese.

McQuaid won its first-ever state title in boys’ volleyball, and the cross-country team — led by Robert Hurlbut’s individual crown — finished as the state’s best as well. Meanwhile, AQ football moved one step away from its own championship with a 35-12 Class A semifinal win over Whitesboro on Nov. 19.

McQuaid finished off its 2010 season in style, winning 25-18, 21-25, 25-21, 25-20 over Half Hollow Hills of Section 11 in the state Class A championship match held Nov. 20 at Cicero-North Syracuse High School. The Knights were strongly challenged early on, but won their final two games to clinch the match as Steve O’Dell had 43 assists overall. McQuaid finished its championship season with a 23-1 record.

State success came to the Knights behind the able legs of Hurlbut, a senior, who placed first in Class A of the NYSPHSAA meet on Nov. 13 with a time of 15 minutes, 58.2 seconds — decisively ahead of second-place Daniel Siegel of Great Neck South (16:14.1). Meanwhile, the Knights’ Wyatt Gouldthorpe finished 10th; Ricky Mesolela, 36th; Chris Dunne, 38th; and Kevin Tobey, 48th. Their combined excellence on the Lakeside Park course near Poughkeepsie gave McQuaid the team title.

The Knights’ state crown was preceded by a great day at the Section 5 Class A championships on Nov. 6 at Genesee Community College. Hurlbut led individually in 16:16, besting second-place Lou Lipani of Greece Arcadia (16:23). Gouldthorpe finished third; Dunne, 13th; Mesolela, 17th; and Tobey, 24th as the Knights won the team event with 58 points. Pittsford Sutherland was next-closest with 79 points.

The Little Irish’s state semifinal win over Whitesboro of Section 3 saw AQ pull away from a 21-12 halftime lead by holding the Warriors scoreless in the second half. Mike Messina, Billy Lombardi, Nick LoBrutto, Cory Benedetto and Tim Young all scored rushing touchdowns as the Irish upped their record to 12-0 and advanced to the championship game on Nov. 26 against Harrison of Section 1.

In state quarterfinal play, AQ won 36-6 over Buffalo Sweet Home of Section 6 on Nov. 12. The Irish stopped a 36-game winning streak by the Panthers, who were the two-time defending state champions. AQ scored in every quarter, leading at the breaks 7-0, 17-6 and 23-6. The balanced Little Irish attack was led by LoBrutto’s touchdown runs of 31 and nine yards.

Aquinas qualified for state play by squeaking past third-seeded Victor, 10-7, in the Section 5 Class A title game on Nov. 6. The top-seeded Little Irish won their fifth straight sectional by scoring all their points in the second quarter as Young made a five-yard touchdown run and Eric Terhaar kicked a 30-yard field goal for a 10-0 halftime lead.

The Kings settled for a cochampionship in the Section 5 Class CC final with East Rochester on Nov. 6. After finishing regulation play and overtime in a 0-0 tie, the sixth-seeded Kings and top-seeded Bombers were both declared champions. The two teams went to penalty kicks to determine who would advance to state play, and East Rochester won that round 3-1.

Kearney had advanced to the final with a 2-1 semifinal win over No. 2 Byron-Bergen on Nov. 3. John Dilal and Tim Curran were the goal-scorers, and Matt Strauss assisted both times. Prior to that, the Kings won 5-2 over No. 11 Letchworth in first-round play on Oct. 26 and 3-0 over No. 3 Naples in an Oct. 30 quarterfinal game.

DeSales’ Karski won a Section 5 cross-country title by placing first in the Class D meet on Nov. 6. His time of 17:27 bested second-place Mason Sutorius of Harley Allendale-Columbia, who finished in 17:34.

In golf, Our Lady of Mercy’s Schmitt earned the Section 5 crown by shooting a five-over-par 78 at Brook-Lea Country Club in the sectional tournament held Oct. 18. Monarch teammate Danielle Fuss totaled 85 that day to place third. Both Schmitt and Fuss, by finishing in the top nine, qualified for the state tournament next June.