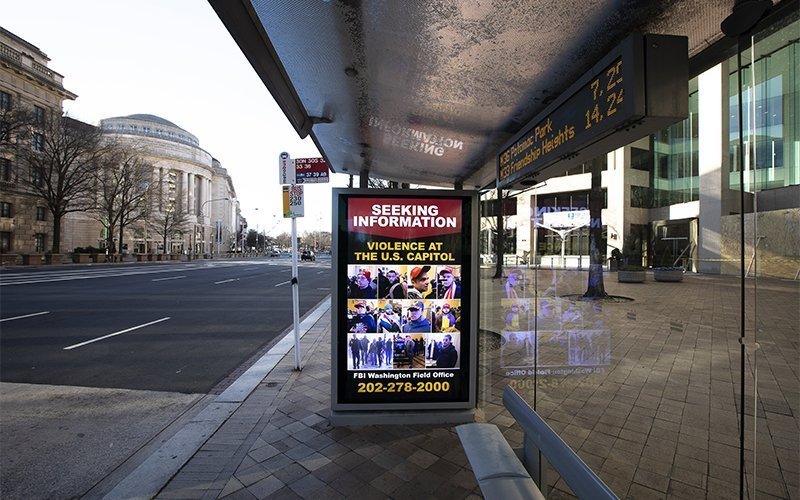 A billboard seeking information about the attack on the U.S. Capitol is seen at a bus stop in Washington Jan. 9, 2021. (CNS photo by Tyler Orsburn)

WASHINGTON (CNS) — Just as the political and criminal fallout has continued over the Jan. 6 storming of the Capitol by people seeking to halt the Electoral College certification of President-Elect Joe Biden’s win in the November election, the fallout has extended to job losses for those who have been identified as taking part in the siege.

One case in point: Rick Saccone, who for the past 20 years had been an adjunct professor teaching courses in international relations and global terrorism at St. Vincent College in Latrobe, Pennsylvania. Saccone tendered his resignation after college officials started an investigation once it became aware of his tweets outside the Capitol.

A Jan. 7 statement from Benedictine Father Paul Taylor, St. Vincent president, did not name Saccone by name but said the professor’s resignation from the college was “effective immediately. He will no longer be associated with Saint Vincent College in any capacity.”

Father Taylor added: “All individuals have the right to an opinion, but when beliefs and opinions devolve into illegal and violent activities, there will be no tolerance.”

Saccone, a former Pennsylvania state representative who unsuccessfully challenged U.S. Rep. Conor Lamb two years ago for an open House seat, tweeted Jan. 6: “We are storming the capitol. Our vanguard has broken through the barricades. We will save this nation. Are u with me?” The tweet was removed before the day was over.

But the damage had already been done. An online petition on change.org calling for his termination from the faculty had collected more than 900 signatures before it, too, was taken down.

Saccone is far from the only one to have lost a job after participating in the activities of Jan. 6, which started with a rally featuring incendiary remarks by President Donald Trump and his personal attorney, former New York City Mayor Rudolph W. Giuliani, and devolved into chaos as many at the rally headed to the Capitol. The melee inside left five people dead, including a Capitol Police officer.

Some of those involved were betrayed by their own social media posts.

A man who worked at a printing and marketing firm in Frederick, Maryland, was fired when a photo of him at the Capitol went viral. It showed him wearing his work badge. A Dallas lawyer who worked as the head of human resources at an insurance company was fired after someone posted on Twitter the lawyer’s Instagram story about being at the Capitol. A Chicago real estate agent was fired after her posts about “storming the Capitol” got back her employer.

In Washington, the House was preparing an article of impeachment against Trump for his role in sparking the violence if Vice President Mike Pence and the Cabinet did not invoke the 25th Amendment to remove Trump from office. If the article of impeachment passes, Trump would be the first president to be impeached twice.

There have also been calls for the resignations of Republic Sens. Ted Cruz of Texas and Josh Hawley of Missouri for leading the charge to challenge the Electoral College ballot counts; a book publisher has already canceled a contract for a book Hawley was writing.

There have also been calls for the resignation of a Pennsylvania state representative who appeared with Saccone outside the Capitol in one of his tweets, and a West Virginia lawmaker who breached the Capitol.

Meanwhile, the FBI says it has received more than 50,000 tips pointing to people in connection with the Jan. 6 events. Already arrested and charged are the man who brought a host of “zip ties,” or plastic handcuffs, with him into the Capitol; the man who dressed in a Teutonic-style horn headgear and a fur vest; and the man who broke into the office of House Speaker Nancy Pelosi, D-California, and propped his feet on the desk of one of her aides.

As of midday Jan. 11, no one has been charged in the death of Capitol Police officer Brian Sicknick, who died Jan. 7 after being assaulted inside the Capitol.