Family at the forefront - Catholic Courier 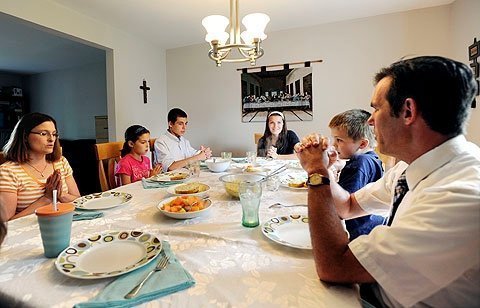 Our Mother of Sorrows parishioners H.J. and Jennifer Lozy-Lester try to have meals together with all six of their children.

Without saying a word, the Lozy-Lester home is a reflection of the family’s Catholic faith.

Religious art and symbols, including a tapestry of the Last Supper, hang on the walls throughout the family’s home.

Yet with two busy teens in high school and four younger children, the family juggles schedules to attend weekend Masses and break bread together at least twice a week, noted Jennifer Lozy-Lester.

These challenges are some of the reasons why the Greece mom welcomes "Strong Catholic Families, Strong Catholic Youth," a new nationwide initiative that aims to help Catholic families live out their faith and share it with their children.

Locally, 10 parishes representing 16 diocesan worship sites have presented the initiative to parents through meetings and sought parents input on how parishes can help them. At the diocesan level, staff members have planned family-focused retreats, developed a "Households of Faith" newsletter, and are creating a website with resources and catechetical information for parents.

Lozy-Lester said a family-focused initiative is both needed and welcomed.

"What we do in the home makes a big difference to the whole body of church," Lozy-Lester said. "It’s nice to hear that what you do as a parent matters."

Although the "Strong Catholic Families, Strong Catholic Youth" initiative is new, families have long been seen as a foundation and a model of the "domestic church," a term that dates back to the early church.

In the 1981 apostolic exhortation Familiaris Consortio, (The Role of the Christian Family in the Modern World), Pope John Paul II wrote that the family forms a community, serves life, develops and shares in the life and mission of the church.

"Animated in its own inner life by missionary zeal, the Church of the home is also called to be a luminous sign of the presence of Christ and of His love for those who are ‘far away’ for families who do not yet believe, and for those Christian families who no longer live in accordance with the faith that they once received. The Christian family is called to enlighten ‘by its example and its witness … those who seek the truth,’ " Pope John Paul II wrote, quoting Lumen Gentium, the Second Vatican Council’s Dogmatic Constitution on the Church.

The National Study of Youth and Religion, a comprehensive, longitudinal study of teens and parents of various religious backgrounds, found that parents play a critical role in the development of their children’s faith.

"For the first time, it gave us a lens into the faith of young people, not only their faith, but how they acted or didn’t act on what they believed and also their parents’ role in that whole process," said Theisen, who served as the Diocese of Rochester’s director of youth ministry from 1992 to 2005 and is a parishioner of Blessed Kateri Tekakwitha Parish in Irondequoit.

Rather than rebelling against their parents’ faith, the study showed that most adolescents mirror their parents in terms of religiosity and church attendance, or lack thereof, Theisen said. The study also has revealed that parents who are more religious tend to have teens who are less likely to engage in delinquent behaviors ranging from painting graffiti to selling drugs, as long as those teens internalize their parents’ religious practices. Teens who are more religious tend to have higher self-esteem and are generally more positive about life than are their less religious peers, the study noted.

After doing many presentations on the research, the youth ministry federation realized parents needed help acting on this information, Theisen said.

"There’s a hunger out there among families to grow in their faith," he said. "They just have a tough time to know where to start and how to get started."

In partnership with the National Conference for Catechetical Leadership and the National Association of Catholic Family Life Ministers, the National Federation for Catholic Youth Ministry has brought the initiative to 50 dioceses. A version in Spanish and tailored to Latino culture called Fortaleciendo Familias en la Fe also has been developed.

Theisen noted that the effort may not see full fruit until the young people currently participating have children of their own. Yet he promised that the initiative is here to stay.

Strong Catholic Families, Strong Catholic Youth arrived in the Diocese of Rochester in August 2011, and parishes have been presenting it to parents since then, said Jonathan Schott, coordinator of adult, catechist and family formation for the diocese. After learning about the national study, parents discuss findings with their peers and fill out response forms telling parishes what kinds of support they need.

"Parents have the opportunity to be extremely clear and brutally honest about what they want and what they need," Schott said. It’s up to the parishes to act on what they hear, he said, adding that the initiative is a new way for them to relate to families.

For example, parents might identify needs for family-friendly seating or more changing tables at the annual parish festival. Parents also may note whether a parish’s Mass schedule is family-friendly.

Parents — a term that Schott notes encompasses single parents, grandparents, godparents and other family figures — often leave the initial sessions fired up and looking for ways to incorporate faith into daily life, he said. For instance, a family can display a child’s baptismal candle and take time each day to pray together. In the summer, families can use such events as baby showers and weddings to discuss faith, Schott said.

Some parish staff members say the initiative has them fired up as well. Rich Rasmussen, coordinator of youth and family ministry for Immaculate Conception Parish in Ithaca who will bring the initiative to the parish in the fall, said he feels the initiative is critical since some Catholic parents struggle to articulate and express their faith to their children.

"This absolutely has to be a mind-set, because it is such an innovative and a big thing," Rasmussen said. "We should be looking at everything we do in the parish community through the lenses of family."

As a parent of two boys ages 9 and 7, Jodi Miller, co-coordinator of faith formation for Our Lady Queen of Peace Parish in Brighton, said she was trained as a presenter because she wants to help her fellow parents engage their children in church. Parents may decide they want to learn more about their faith so they can better teach their children, she said. It’s something she did when she first volunteered to be a catechist years ago.

"The best way to learn about your faith is to teach it," she said.

Lozy-Lester said she also has found that the more she learns about her faith, the more confident she feels in sharing it with her children. She said she also felt the need to connect with other parents, so during a parent session at Our Mother of Sorrows Parish in Greece in April , she suggested that the parish create an online forum for parents.

"You have to develop your own circle of people you know who share your values, so you don’t feel so isolated," she said.