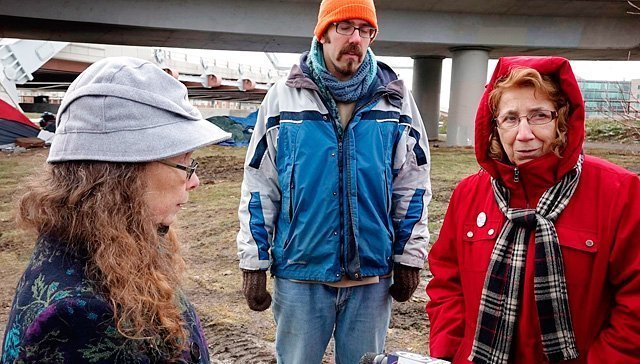 Sister Rita Lewis (from left), Ryan Acuff and Sister Grace Miller, representatives of the House of Mercy, stand on the Sanctuary Village site in Rochester Dec. 20.

The story of the homeless living outside in the cold in Rochester had the makings of a sad Christmas tale.

That was when a family entered House of Mercy Dec. 23 and wrote out a check for $60,000 — the amount that homeless advocates have estimated they need to buy a building to house some of Rochester’s chronically homeless.

Some of these homeless individuals had been living in tents under the Frederick Douglass-Susan B. Anthony Memorial Bridge in Rochester in an encampment called Sanctuary Village. Yet the encampment was bulldozed Dec. 20 when many were away after having accepted the offer of staying in a hotel but thinking their personal items, identification and photographs would be undisturbed.

Days after the camp’s destruction and swift public outcry, homeless advocates met with city officials and secured commitments to allow the rebuilt encampment to remain as more permanent accommodations are found.

Public outcry over the camp’s demolition was swift, and a fund set up by advocates in the wake of the demolition raised more than $12,000 in one day. Outrage prompted one local family to walk into the House of Mercy, a Rochester homeless shelter, and write the large check, said Sister of Mercy Grace Miller, the House of Mercy’s executive director. The House of Mercy, St. Joseph’s House of Hospitality and a group of advocates had been aiding the homeless living under the bridge behind 99 South Ave. since August, when many were closed out of a Rochester parking garage where they had been sleeping.

Sister Miller said the donor family had not been connected to the House of Mercy in the past.

"They said they were upset over what was happening to the homeless and they wanted their whole family to come in," Sister Miller said.

She noted that more money than the $60,000 single donation and the $17,000 in fundraising campaign proceeds will be needed, because additional money will be necessary to pay for operating expenses for the potential new home. Fundraising for the "A Home for the Holidays" GoFundMe Campaign is continuing at www.gofundme.com/SanctuaryVillage.

Advocates are continuing to search for a suitable building downtown that would meet their requirements and zoning laws. The city announced Dec. 23 in a press release that it had met with advocates and was working to find short- and long-term solutions to serve the homeless.

"Rochester is a very giving community, and especially now, in the middle of the holiday season, we are fortunate that so many people care about the most vulnerable among us," Mayor Lovely A. Warren said in a statement. "With Sister Grace’s support, we are working toward a compassionate and viable solution to serve this population.”

The statement noted that advocates have agreed to work to keep the encampment free of human waste and hypodermic needles and other hazardous items, which the city said had prompted it to clear the camp in the first place, in addition to an open fire at the camp. The city has agreed to return personal items to a location selected by homeless advocates.

The encampment will be allowed to remain during the city’s New Year’s Eve fireworks display and a safe location for the homeless will be identified for the event. Social-service providers also will continue to offer housing at area shelters for those who choose it.

The city’s statement said that Warren and Sister Miller had discussed the steps to create a temporary and permanent indoor facility to serve the chronically homeless. City and Monroe County officials have said that space is available in area shelters, but homeless advocates say that the chronically homeless residents at the encampment have been turned away from shelters for various reasons, including lack of space and failure to meet shelter requirements, such as requiring that they be in a treatment program for substance-abuse issues.

The mayor and Sister Miller discussed the steps needed to create an indoor facility for this population on both a temporary and permanent basis, the statement said.

"After a wonderful discussion, I’m confident that we are in the best position to work collaboratively to meet the needs of our homeless citizens,” the statement quoted Sister Miller as saying.