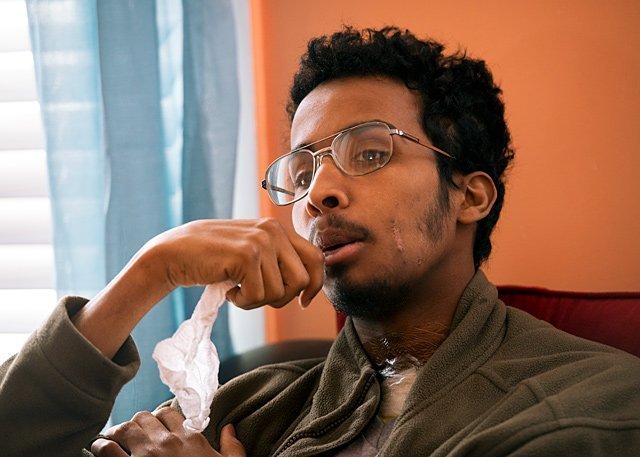 Courier photos by Jeff Witherow Ali Abdulkadir Ali speaks May 15 in Rochester about the April 17 shooting in Columbus, Ohio, that injured him and claimed the lives of his brother and a friend. 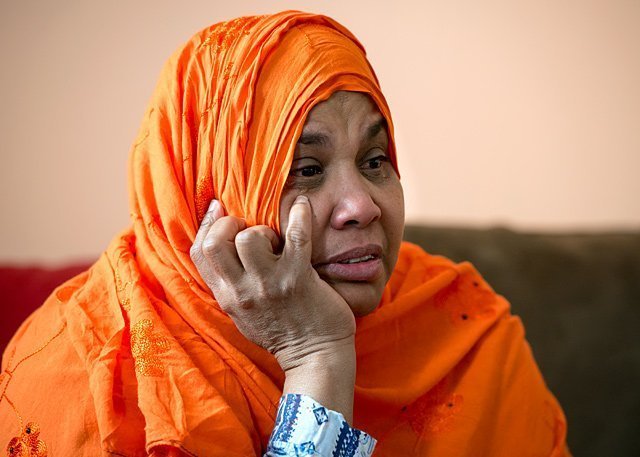 Sadir Jeylani of Rochester tears up May 15 as she recalls the April 17 shooting in Columbus, Ohio, that killed one of her sons and injured another. 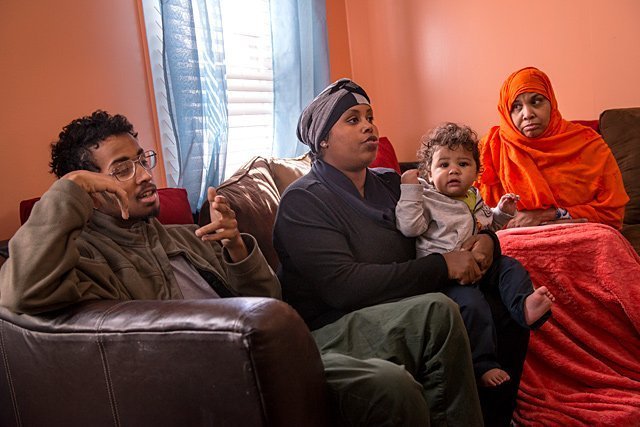 Ali Abdulkadir Ali (from left), his sister, Hani Abdulkadir Ali, and his mother, Sadir Jeylani, recount the April 17 shooting in Columbus, Ohio, that injured Ali and killed his brother, Omar.

ROCHESTER — Ali Abdulkadir Ali of Rochester spent nearly a month in a Columbus, Ohio, hospital recovering from injuries he suffered during an April 17 shooting that took the lives of his best friends.

He said he and his brother, Omar Abdulkadir Ali, 25, and childhood friend, Mohamed Deq, 21, were in Columbus for a weekend-long soccer tournament. The three men had just dropped off another friend and were sitting in a parked car when they were shot. Omar was killed in the shooting and Deq later died of his injuries.

A spokeswoman for the Columbus Police Department said no suspects are in custody and the search for a motive continues as part of the ongoing investigation.

On May 15, a week after being released from the hospital, Ali Abdulkadir Ali was at the home of his mother, Sadir Jeylani, and spoke to the Catholic Courier about the shooting and its aftermath. He broke down in tears as he and other family members recounted the incident that forever changed the lives of their family, which is originally from Somalia.

“We came here (in 1998) after six years in a refugee camp to better our lives,” said his sister, Hani Abdulkadir Ali, the eldest of the family’s 10 children. “We went through ordeals, dehydrations, starvations to come to this country to work hard and better our family. Then, something like this happens. It hurts.”

“I really appreciate it,” Ali Abdulkadir Ali said of the community’s support.

Going through the tragedy has “been hard but to see people helping us makes me a little happier,” he added.

Ali Abdulkadir Ali and the family members said they remain in shock over the tragedy. He had been sleeping in the back seat of the car just before the shooting took place and awoke to see one of the shooters outside his window. He was shot in the lower jaw and played dead until the shooters fled. At the same time, he prayed that his brother and friend were not hurt. When he realized they all had been shot, he ran for help.

Hani Abdulkadir Ali said she had been trying to call Omar on April 17 after family and friends had heard about a shooting in Columbus. Then, two police officers arrived at their mother’s door to tell them that Omar had been killed and that Deq and Ali Abdulkadir Ali were in critical condition. Deq died from his injuries five days later, she said.

Ali Abdulkadir Ali explained that a bullet had entered the lower part of his face on the left side, shattering his jaw. He underwent two surgeries and a tracheotomy during his hospitalization and likely will need more surgery to fix the open wound in his jaw and replace the lower section of teeth that he lost. He also has lost 25 pounds, since he mostly consumes liquids, he said, as he can barely move his mouth to eat or speak.

His sister said doctors told the family that her brother was fortunate because the bullet had missed a main artery in his neck by inches.

She said she believes he survived to find justice for Omar and Deq and advocate for victims of such violence.

“All we want is justice for these boys,” she said. “We are not going to stop. ‚Ä¶ Nobody deserves to go the way they did. So young. So soon in such a horrific tragedy like this.”

She said Omar had moved to Columbus within the past year and traveled back and forth to Rochester often. Her brothers and Deq were extremely close, and the Ohio tournament was one of two they played in every year. Omar had competed in the Columbus tournament since he was 13, his sister noted.

“He loved soccer. ‚Ä¶ It was his dream to somebody play professionally,” she said of her slain brother as she wept. “It’s hard to sleep at night. All I see is his (Omar’s) face and what he went through, and we weren’t there to help or protect him. I keep seeing the images. It’s heartbreaking. ‚Ä¶ He was so kind.”

To maintain his legacy of playing soccer and helping youths in the community, the family hopes to create a foundation in his and Deq’s memory and host an annual soccer tournament. Money raised also would be used to help Ali Abdulkadir Ali recover from his injuries both physically and emotionally, Hani Abdulkadir Ali added.