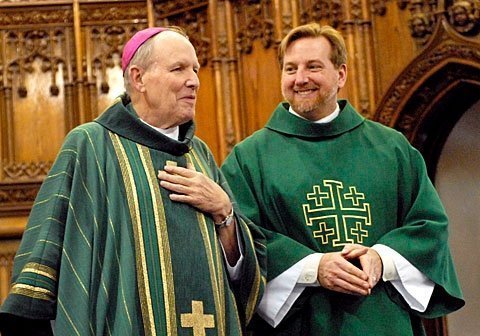 When the news broke last year that a priest would be ordained for the Diocese of Rochester in 2011, many were caught off guard since no ordination previously had been scheduled. The surprise was further heightened by word that the person in question had a wife and six children, was once a Protestant minister and taught at a local Protestant college.

But Scott Caton’s pursuit of the Roman Catholic priesthood was far from out of the blue. After 10 years of preparation, his quest took a big leap forward when he received permission from the Vatican to be ordained a transitional deacon last June 5. Nearly one year later, Deacon Caton is on the brink of a truly historic occasion for this diocese. He will be ordained by Bishop Matthew H. Clark on Saturday, June 11, at 10:30 a.m. at Sacred Heart Cathedral.

Deacon Caton’s unusual circumstances have generated a range of reactions — from confusion about how he qualified for a vocation normally reserved for celibate men, to anger among some Protestants that he has embraced Catholicism. Yet Deacon Caton said the overall feedback has been quite positive, and he now welcomes the challenge of blending priestly duties with his family and teaching responsibilities.

"If the Lord has called me to be a priest, he’s not going to call me to anything that’s unfair to the commitments I’ve already made," Deacon Caton said. "If that happens, then something’s not right."

A fulfillment of faith

Deacon Caton, 50, is a lifelong Spencerport resident and 1978 graduate of Spencerport High School. He has been married to his high-school sweetheart, Bonnie, for nearly 29 years. They have five daughters and a son ranging in age from 8 to 27.

Deacon Caton earned a bachelor’s degree from Roberts Wesleyan College in 1986, a master’s degree in religion from Westminster Theological Seminary in 1988 and a doctorate in history from the University of Rochester in 1998. He is completing his 21st year of teaching at Roberts Wesleyan, following in the footsteps of several family members who also have been educators. He is a professor of American history and church history at the North Chili college, and in 1998 became a founding member of Northeastern Seminary, an ecumenical institution located at Roberts Wesleyan.

Before becoming Catholic, most of Deacon Caton’s ministerial work was done in Congregational, Reformed and Presbyterian churches, and he also served briefly as a Baptist minister. But as time went on, the influence of Catholicism grew on him and he entered the Catholic Church in 1998.

"I think that what really helped to drive it was my study of the history of the (Catholic) church — how doctrinal and theological history has worked over the centuries and how that works with my love for Scripture," he said, adding that he was influenced in his conversion to Catholicism by famous converts G.K. Chesterton and Venerable John Henry Newman.

"If I could pin one guy who helped me in the process it would be Newman, who also struggled with issues of how history and theology and Scripture worked within his Catholic experience," Deacon Caton remarked.

Yet Deacon Caton emphasized that he doesn’t want his immersion into the Catholic faith to be construed as a criticism of Protestant teachings and spirituality.

"Through this kind of historical and theological quest, I very rarely found fault with anything in my Protestant background. I felt being a part of the Catholic Church was more of a fullness of what all my Protestant brothers and sisters in their denominations have. They’ve got great things going for them," he said. "All the parts of me that were Protestant were brought to a fulfillment in the Catholic Church."

However, Deacon Caton discovered that his quest for fulfillment did not end when he became Catholic.

"I felt a real call to the Catholic ministry. It was something that always stayed with me and was always very real to me. And it never went away," he said.

Although he was aware that numerous ministerial opportunities exist for lay Catholics, the calling he felt clearly pointed toward the priesthood.

"There was something about the Eucharist and what the priest does on the altar that was in this whole desire," he explained.

Approximately 11 years ago, he recalled, "My wife and I went to the bishop together to talk to him about the possibility of doing this since I had already been an ordained Protestant clergyman." Because it was such an unusual situation, "We didn’t talk to very many people about it," he said.

He began to work toward the priesthood under the counsel of Bishop Clark and diocesan officials, and a file was established with the Vatican’s Congregation for the Doctrine of the Faith. Final approval to proceed toward ordination came last year from that office as well as Pope Benedict XVI.

Father James Schwartz, diocesan director of seminarians, said that although obtaining dispensation from celibacy is rare in the Roman Catholic priesthood, the ordination of former Protestant ministers does occur in other U.S. dioceses.

"We aren’t alone. (Approval is) being routinely made when they have the support of the bishop," Father Schwartz said, adding that he hopes more people will come forward who might fit these special circumstances: "I think of it in terms of inclusivity — it opens the door to a wider sphere."

Over the past decade Deacon Caton has studied canon law, sacramental theology, moral theology and liturgy as part of his formation for the priesthood. From 2009-10 Deacon Caton did a one-year pastoral internship at St. Joseph Parish in Penfield, where Father Schwartz is pastor, visiting hospitals and nursing homes and taking part in staff meetings. As a transitional deacon he has been stationed at Rochester’s Blessed Sacrament Parish, where he has given Sunday homilies and made presentations to parish groups. He also helps out when possible at his home parish, Our Lady of Victory/St. Joseph in Rochester.

By and large, Deacon Caton said Protestants’ reaction to his pursuit of the priesthood has been affirming.

"People here (at Roberts Wesleyan), either they’ve been supportive or inquisitive about it. I’ve not gotten the impression that they’ve been upset about it," he said.

A notable exception became evident on the day of his diaconal ordination, when Baptist street preachers used blaring bullhorns outside Sacred Heart Cathedral to denounce Deacon Caton as a heretic.

Doug Mandelaro, diocesan spokesman, said diocesan officials chose to ignore the protesters. Deacon Caton, on the other hand, found them difficult to tune out since they directed cutting remarks toward him, his wife and his children.

ell, I never expected it and I hope it doesn’t resurface at the priestly ordination," he said. "For me it cast a shadow over the (diaconal) ordination. I haven’t had any kind of opposition on that level ever before. Apparently these people felt they needed to tell people the ‘truth’ about the Catholic Church. That was difficult, let’s put it that way, even though I know that not everybody is going to be happy with what I’m doing — especially those who believe the Catholic Church is the Antichrist or something like that."

Deacon Caton said he hopes for differing denominations to seek unity in Christ — a unity that "compels us to overcome some of these historical, cultural and hermeneutical hard-wirings that we bring to the table. That is the operative deepest truth — if we are one in Christ, we are brothers and sisters. Christians today need to come together to do things to minister to the world in unity and show Jesus Christ’s reality to the rest of the world. Certainly not everyone is going to come together as one church, but they can see they’ve got way more in common than what they hold separately."

"(Bishop) Fulton Sheen said, ‘Most people don’t hate what the Catholic Church teaches — they hate what they think the Catholic Church teaches,’" Deacon Caton added. "The one thing I hate more than anything else is misrepresentation. It’s easier to have tags and labels. It takes hard work to learn the truth — to learn the other side and learn about it fairly."

A servant at heart

Deacon Caton said fellow Catholics have received him warmly, even though many realize he won’t be devoted to full-time ministry because of his family and teaching commitments.

"All the priests that I’ve ever talked to in this diocese have been so kind and welcoming to me. They know of my special circumstances," he said.

Father Schwartz, for one, said he’s "very excited" about Deacon Caton’s upcoming ordination, saying "the priesthood of the Diocese of Rochester will be enriched."

"He’s a fascinating person. I am convinced he’s being faithful to the call of priesthood," Father Schwartz said. "As anything else, we can be enriched by our life experience. Scott Caton is enriched by his experiences as a husband and a father of six beautiful children."

Following his priestly ordination, Deacon Caton will continue to reside in Spencerport and teach full time at Roberts Wesleyan. He hopes to assist with the sacraments at a nearby parish or cluster, mostly on weekends.

"I see myself functioning in some role where the regular parish community doesn’t have to count on me 24-7," he said, acknowledging that fulfilling his many responsibilities will be tricky but "through the Holy Spirit’s guidance, that can happen. I think that I can achieve an authentic priesthood."

Deacon Caton added that he doesn’t intend to use his ordination as a platform for having the celibacy requirement dropped for Roman Catholic priests.

"I’m constantly reiterating to people that I’m not going to be a poster boy for the married priesthood," he remarked, saying that his anticipated time limitations might render him "a good example of why you shouldn’t always be clamoring for married priests."

If anything, Deacon Caton said he would just like to blend into the fabric of the diocesan priesthood without drawing special attention to his personal background. That can be accomplished, he said, "by doing my duties in a thoughtful, charitable, service-oriented way — being a good priest doing service to others."