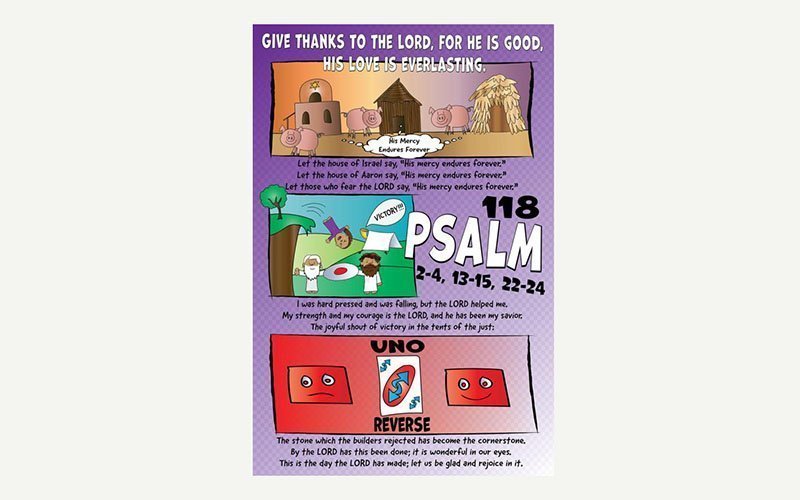 This is a page from the children's missalette "Diary of a God Man." (CNS photo courtesy Travis McAfee/Arkansas Catholic)

LITTLE ROCK, Ark. (CNS) — Grace Dickinson is blunt in her 12-year-old wisdom — the Catholic missalette is boring. But not because of the Scriptures, which are filled with exciting stories of our faith, but the presentation itself.

“It doesn’t appeal to kids,” she said. “It only has color on the front page.”

And in a family of eight — parents Kevin and Tiffany Dickinson, both 37, and six children 14 and younger — staying focused at Mass can be a challenge.

To make the Scriptures come alive, the family is creating “Diary of a God Man,” a comic-book-style missalette to not only keep children engaged in the liturgy, but to give them an understanding of the Bible on their level.

Their team includes mom Tiffany as the spiritual director and dad Kevin as supervisor. Tiffany is a graduate student, working on her doctorate as a nurse practitioner, and her husband is a small-business owner of Preferred Office Technologies in Fayetteville.

But the creative geniuses making it relatable are the children, who attend St. Joseph School, and each of them has a job — Gabbi, 14, treasurer; Grace, 12, head of sales; Joseph, 11, illustrations; Ann Marie, 9, digital marketing; Eli, 7, creative; and Catherine, 4, moral support. And the titles are not just honorary — from Gabbi creating profit/loss statements to Ann Marie handling emails and the website to Grace leading the promotions, they’re growing spiritually.

“The whole point of this is because we wanted kids to be engaged in the Mass and really get something out of the Scriptures; not just sit still and be quiet at Mass and be good, but to leave Mass learning something,” Tiffany Dickinson told the Arkansas Catholic, newspaper of the Diocese of Little Rock.

The family offered the Easter season readings and illustrations for free on their website, diaryofagodman.com, while public Masses were canceled amid the COVID-19 threat.

“It’s challenging enough for kids to pay attention at church, let alone at home,” Kevin Dickinson said. “In these uncertain times having Mass streaming, we just wanted it to be a resource” for families.

“If we don’t raise the total amount, we don’t get anything,” Kevin Dickinson said, explaining money is returned to donors if the set goal isn’t achieved.

On Feb. 26, Grace Dickinson won $1,000 in the IdeaFame Business Pitch Contest hosted by Startup Junkie in Fayetteville. She had 60 seconds to pitch their business plan, no notes in hand, and beat out 22 other contestants.

“When I was actually up there, I wasn’t too nervous because I’ve been a dancer for a long time so I don’t really have any stage fright. I was pretty comfortable being up there,” she said.

They invested in a Kickstarter video, an attorney and free online illustrations, created by close friend Travis McAfee, a parishioner at St. Raphael and owner of McAfee Studios.

“The unique thing about it is at its foundation, it’s kid-led,” McAfee said. The illustrations are based in “modern kid culture,” which as a volunteer youth minister along with his wife, McAfee said it’s important to connect it to a child’s world. It’s also fulfilling his childhood dream to be a cartoonist.

“I just see God working through it,” he said. “The kids are using their insights and gifts, I’m using mine and we’re all using it to build up the kingdom.”

“That’s been very humbling and overwhelming that people really like this enough and believe in it enough and want to help encourage it to keep going,” Tiffany said.

Those who pledge money for the project receive incentives for different levels of pledges, ranging from $5 for an original digital proof of the book concept to $250 or more, which includes gifts such as a signed hard copy, merchandise and a personalized character of the donor or someone of their choice to appear in a Bible reading of their choice.

The plan is for the first missal to be completed by November. It will be for Year A — the Catholic Church’s liturgical calendar follows a three-year cycle, A, B and C. It will be 232 pages, for 52 Sundays and six holy days and will include the Sunday liturgy first reading, responsorial psalm, second reading and Gospel illustrations in full color.

Sales from the first book will be invested in books for years B and C and later on in merchandise, coloring books and publications in multiple languages. The family also will put 10% of the book proceeds toward St. Joseph School and the church building fund.

On Sundays, the Dickinsons sit around their dining room table and Tiffany reads the Sunday Scriptures. The children then discuss and sketch their interpretations, which are combined by Kevin before being sent to the illustrator.

The ultimate goal is to move children closer to God.

Editor’s Note: To learn more about the missalette project or to donate, visit diaryofagodman.com.

Hanson is associate editor of Arkansas Catholic, newspaper of the Diocese of Little Rock.