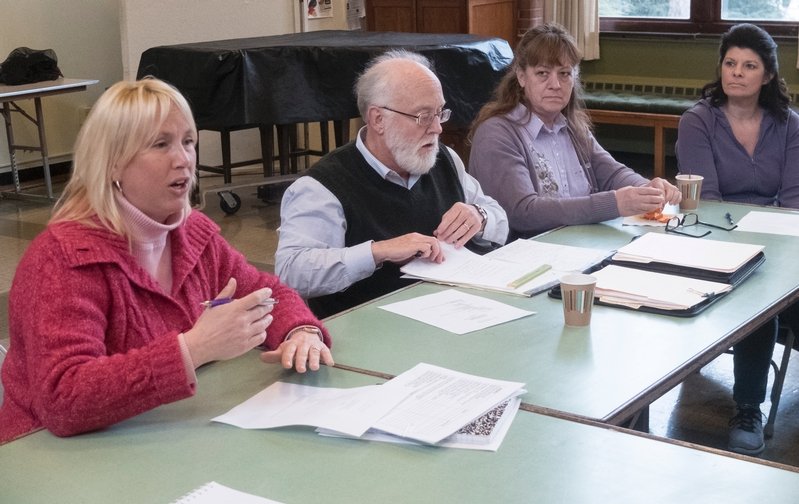 During a March 13 meeting at The Presbyterian Church in Geneva, Kathleen Wagner (left) gives an overview of Family Promise of Ontario County as Bill Fox, Judy Andrews and Karen Andrews look on. The program assists families in the county who are homeless.

Homelessness is big problem in Ontario County, according to Kathleen Wagner.

You don’t usually see people sleeping on benches in Canandaigua or people panhandling in Victor, Wagner noted, but there are plenty of people — including families — in those areas who bed down in their cars at night because they don’t have shelter elsewhere. Soon these families will have somewhere to turn for help.

Wagner is the president of Family Promise of Ontario County, a new organization whose goal is to help homeless families become sustainably independent. This organization will provide homeless families with safe lodging, nutritious meals and fellowship while at the same time help them find their way out of homelessness. The organization is an affiliate of the national Family Promise organization, which has successful affiliates throughout the nation, including Rochester’s RAIHN, or Rochester Area Interfaith Hospitality Network, Wagner said.

Although Ontario County’s homeless population is largely hidden, it is known in school districts, which are required to report to the state the number of homeless students in their districts. According to those state statistics, during the 2015-16 school year there were 17 homeless students in the Canandaigua City School District, 58 in the Geneva City Schools and 17 in the Victor Central School District, for example.

People working in social services and in faith communities, where people in need sometimes turn for assistance, also are aware of the county’s homeless population. They know there’s no one solution that will end homelessness, Wagner said, but in May 2016 a group of people decided to see what they could do to help homeless families in particular. That month they held a community meeting at St. Mary Church in Canandaigua to gauge interest in starting a Family Promise affiliate in Ontario County.

More than 100 people attended the meeting, and soon a core working group formed to start such an organization. That group’s first goal was to find faith communities willing to serve as host congregations and support congregations. Host congregations, Wagner explained, agree to open their doors to homeless families during the overnight hours of four weeks each year. Not only do they provide families with a place to sleep, but they also provide hot meals in the evening, cold items for breakfast and bagged lunches the next day, and volunteers to provide the meals and fellowship to the families.

“The support across the county from the faith community has been just overwhelming,” Wagner said.

“The social-ministry committee (at St. Benedict) almost immediately decided unanimously that we not just wanted to be involved, but we wanted to be a host,” explained Bill Dibacco, who belongs to the social-ministry committee as well as the pastoral council. “This is the sort of activity we want to get involved in. Our mission statement says that we’re to (embody) knowing, loving and serving God to the local communities, so it’s pretty consistent with that.”

Another key component of Family Promise is the day center, which is a fixed location that is open 365 days a year. The organization is close to securing such a location, Wagner said. Families will leave the host congregations around 7:30 each morning and head to the day center, where they can shower, do laundry and conduct job searches. The facility will be staffed by a full-time director and hopefully a part-time caseworker, Wagner said.

These trained staff members will conduct a thorough intake process and build an individual case plan for each family that enters the program. Families are required to commit to working on their case plans every single day.

“We will be working to put together a plan so families, once they leave our program, should not be returning to homelessness,” Wagner said. “I think one of the greatest things about this program is it is a hand-up program. It is not a handout program.”