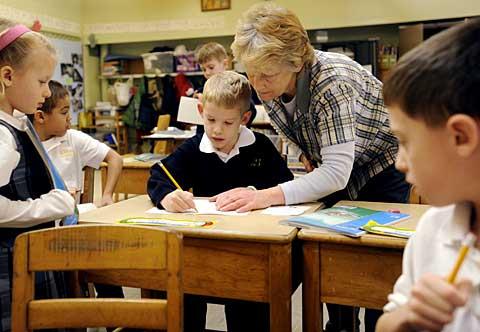 Not many folks can claim to have more than 100 siblings. But according to Gracyn Bocon and Emily Willis, that’s been their experience regarding St. Mary Our Mother School, where they’re both sixth-graders.

"We go to each others’ houses. The whole school, we do stuff together," said Gracyn, 11.

Marilyn Zinn, ninth-year principal, is right on board with Gracyn and Emily’s sentiments about the St. Mary Out Mother community.

"We have a wonderful relationship. I know everybody by name; it’s my extended family here in Horseheads, " Zinn said, adding that the intimate setting means "we can focus in on each individual. They all have some strengths or gifts or talents. We are able to focus on what they have inside of them that makes them shine."

Bright lights have now illuminated the Horseheads school for a half-century: This past September marked 50 years since classes were first held there. The luminous aspect of St. Mary Our Mother is being accentuated by its theme for 2009-10, "Reach for the Stars."

The school, located at 811 Westlake St., was erected at a time when the Horseheads population was expanding rapidly. Support by St. Mary Our Mother Parish was obvious from the get-go, as a fundraising drive in 1958 exceeded its $100,000 goal by some $60,000. The school’s roots were recalled at a first-ever reunion in June 2008 that "was extremely well-attended," Zinn said.

Though the prekindergarten through grade 6 school is comparatively young, having been the most recent of all Southern Tier Catholic schools to open its doors, it’s now seeing a third generation of family members. Zinn said many current students’ parents — and even some grandparents — are St. Mary Our Mother graduates.

Gracyn, who plans to attend public school upon leaving St. Mary Our Mother, admitted that the prospect of a bigger school makes her "a little nervous" as she moves beyond her familial surroundings. By the same token, Zinn acknowledged that the student body can’t become so small that St. Mary Our Mother’s survival is threatened. She noted that the current enrollment is 110 after being 111 in 2008-09 — at a time when many other diocesan Catholic schools are struggling to keep their numbers up.

"I feel very encouraged," she said.

The school has developed a legacy of excellence over its history. Zinn — who estimated that slightly above 50 percent of its graduates go on to Catholic school, predominately Holy Family Middle School in Elmira — said that "we hear of their strengths" from both Catholic and public middle schools.

"They leave us being very, very well-prepared," she added.

Emily serves as one example of St. Mary Our Mother’s well-roundedness, saying, "I like all the different classes and all the teachers. She added that her favorite subject is social studies: "I like learning about different geographies of different places in the world."

St. Mary Our Mother’s students also take part in a variety of service projects, such as making nursing-home visits and supporting the local food pantry.

"It just make them better people. I say often that Catholic means universal, and we should be more tolerant of everyone and accepting of everyone," Zinn remarked.

She noted that in conjunction with its 50th anniversary, St. Mary Our Mother did a "Birthday in a Bag" project which involved students making 50 gift bags for the food pantry that contained cake mix, frosting, candles, plates, napkins, balloons and a card. Zinn said the effort proved so popular, it will likely be repeated in the near future.

St. Mary Our Mother’s finer points have been shared this past year with the Middle States Commission on Elementary Schools, as the school strives to become accredited by that organization. The accreditation process involves such criteria as mission and goals; leadership and governance; integrity; finances; and student services and activities. Zinn said St. Mary Our Mother is due to hear of its status this spring, and she’s highly hopeful that the accreditation will be awarded based on MSCES evaluators’ comments when they visited the school in December 2009.

"They were very affirming, very positive. They had wonderful things to say," Zinn said.