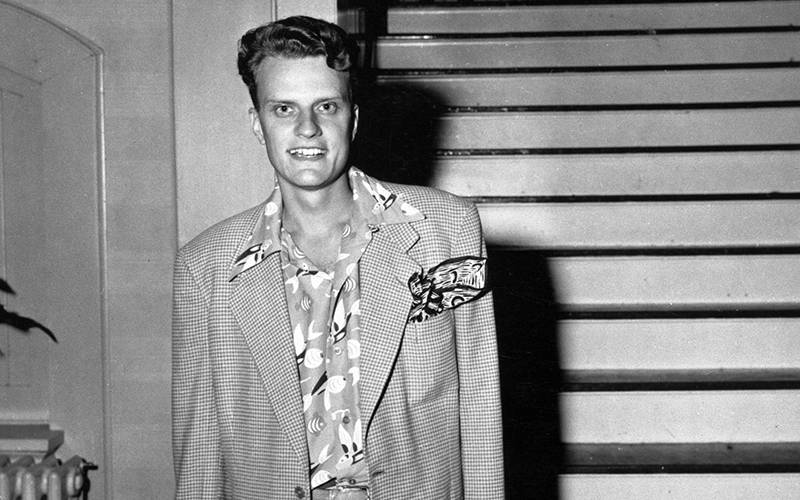 NEW YORK (CNS) — The opening moments of the documentary “Billy Graham” focus on a high point in the celebrated preacher’s career, his address to the 116,000 souls who attended one of his crusades at Chicago’s cavernous Soldier Field on June 17, 1962. His theme: “There’s only one hope for the world, and that is Jesus Christ dying on a cross.”

The filmmakers emphasize that this was the evangelist’s cornerstone message. And he succeeded in sharing it with an estimated 210 million people during a seven-decade ministry that saw him preach to more people in person than any other individual in history. Graham died in 2018, aged 99.

Incomplete and unsatisfying, the film falls well short of its subject’s success as it charts his remarkable — and sometimes controversial — life. An “American Experience” presentation, the profile premieres on PBS Monday, May 17, 9-11 p.m. EDT. Viewers should check local listings, however, since broadcast times may vary.

Director Sarah Colt is a veteran of the series whose work for it includes the Emmy-nominated “Walt Disney” (2015). Keven McAlester scripted the biography, which Cameo George executive produced.

Graham, the son of a North Carolina dairy farmer, was a 16-year-old when he came under the influence of temperance movement leader and itinerant Baptist preacher Mordecai Ham, who steered the young man toward his vocation. Graham then prepared for his life’s work at the Florida Bible Institute and Wheaton College in Illinois, where he met future wife, Ruth Bell.

By age 30, Graham had struck out on his own and was conducting an ambitious tent revival in Los Angeles. The effort, however, was floundering until an unlikely advocate — powerful and eccentric newspaper publisher William Randolph Hearst — intervened.

According to Graham biographer Grant Wacker, Hearst shared the revivalist’s “anti-communist views” and saw him as a promoter of law and order. No less significantly, covering Graham, Hearst believed, sold papers.

The publicity Graham thus received launched him as a national figure.

From the tenure of Dwight D. Eisenhower to that of Barack Obama, the high-profile preacher became known as a counselor to presidents. “Billy Graham” pays special attention to his bond with Richard Nixon.

Graham related to the California native, whom he first met in the Senate dining room in 1952 — the year Nixon would be elected vice president — as a fellow moderate Republican. He went on to become one of the 37th president’s closest advisers.

Graham used his own popularity to boost Nixon’s. But he also urged the chief executive to withdraw from Vietnam.

On a personal level, as Wacker describes it, Graham believed Nixon to be a “devout Christian.” So the tape-recorded revelations of Nixon’s corruption that emerged from the Watergate investigations devastated him. In the words of his pastoral adviser, John Huffman, Graham was “desolate and beside himself with anguish.”

Yet, in the view of Princeton University history professor Kevin M. Kruse, it was precisely the minister’s “retreat from partisan politics” that enabled him to become beloved as “America’s pastor.”

Despite that status, Graham was not without his flaws. Anti-Catholicism, for instance, motivated his national campaign to prevent John F. Kennedy from becoming president in 1960. (Later in life, however, Graham did try to close the divide between Catholics and Protestants.)

Graham also apologized for his anti-Semitic views, which came to light in 2002 when taped conversations he had had with Nixon 30 years earlier surfaced.

In some respects, at least, the show lives up to the standards viewers expect from an “American Experience” production. Home movies and still photos that give an insight into Graham’s youth, for example, prove especially captivating.

Still, the film suffers from what it skims over and, even more so, from what it omits. Having focused on Graham’s rise to prominence and on the painful fallout from the Watergate debacle, the documentarians leave themselves little time to consider the final five decades of the pastor’s long life.

Ultimately, Graham deserves a more balanced — and comprehensive — recounting of his consequential life than he’s given here.