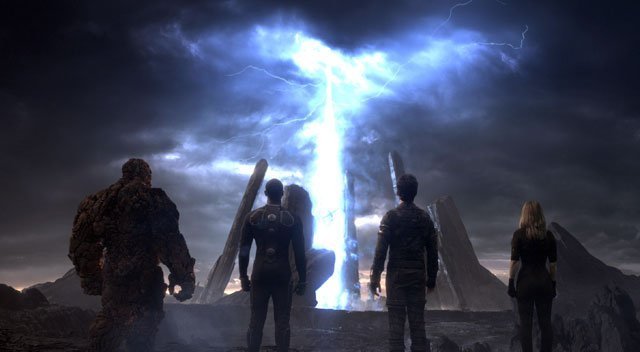 Jamie Bell, Michael B. Jordan, Miles Teller and Kate Mara star in a scene from the movie "Fantastic Four." The Catholic News Service classification is A-III -- adults. The Motion Picture Association of America rating is PG-13 -- parents strongly cautioned. Some material may be inappropriate for children under 13.

NEW YORK (CNS) — The misfortunes of its principal characters become mildly miserable for the audience of the glum sci-fi adventure "Fantastic Four" (Fox).

Parents of the teens at whom this origin story, drawn from the Marvel Comics series, is squarely aimed will want to be aware, moreover, of late scenes featuring some harsh bloodletting. These forays into mayhem make the downbeat film doubtful fare even for older adolescents.

In rebooting a chronicle that reaches back, in print, to 1961 — and whose big-screen history includes an unreleased Roger Corman take as well as two features from the mid-2000s — director and co-writer Josh Trank shows subtlety in his treatment of the titular group’s unsought superpowers.

But the script, which Trank penned with Simon Kinberg and Jeremy Slater, shows no such delicacy as it delivers a ham-handed critique of the military-industrial complex and pushes a naive "science will save us from ourselves" message.

The screenplay’s by-the-numbers promotion of teamwork is little better since it’s transmitted via dialogue so predictable veteran viewers may occasionally be able to mouth the next line in advance.

Through scenes that, at times, resemble an old Archer Daniels Midland commercial, we’re introduced to the work of a quartet of youthful science prodigies whose shared dream is to transport stuff — and, eventually, passengers — to a previously unknown dimension.

Said project has been, at least implicitly, the singular obsession of likeable geek Reed Richards (Miles Teller) since his days as a misunderstood grammar school student. One of the few to appreciate Reed’s genius early on was self-taught engineer Ben Grimm (Jamie Bell), a classmate who thus became both Reed’s earliest collaborator and his best friend.

But Reed and Ben, it turns out, weren’t the only ones knocking on the door of alternate reality. Under the auspices of the wealthy Baxter Institute — and under the magisterial supervision of their dad, institute official Dr. Franklin Storm (Reg E. Cathey) — unruly rebel Johnny (Michael B. Jordan) and his straight-arrow adopted sister, Sue (Kate Mara), have been making their way toward the same threshold.

So too has brooding but gifted bad boy Victor von Doom (Toby Kebbell). (Note to self: Never get mixed up with folks named von Doom.)

Once all four — Ben falls temporarily by the wayside — gain Baxter backing and begin pooling their efforts, the successful construction of the necessary gadget becomes a foregone conclusion. Less easily foreseen are the consequences of an alcohol-fueled celebration of their achievement during which the lads decide to make unauthorized use of the device.

Anxious to forestall others who might steal the limelight by becoming the Neil Armstrong and Buzz Aldrin of their targeted realm, the guys plan a hurried visit to the Other Side, and Reed invites Ben to tag along They’ll stay just long enough to have a look around and plant the U.S. flag.

Surely they won’t be transformed into Super Stretchy Guy, the human equivalent of the burning bush, a hulk made up of boulders and a villain so evil there’s really no labeling him? And there’s no way Sue could find herself turning erratically invisible, is there?

As its travelers across the time-space continuum discover, there is such a thing as outstaying your welcome. Alas, "Fantastic Four" does just that.

The film contains brief gory violence, glimpses of partial nudity, at least one use of profanity, a handful of crude terms and an obscene gesture. The Catholic News Service classification is A-III — adults. The Motion Picture Association of America rating is PG-13 — parents strongly cautioned. Some material may be inappropriate for children under 13.