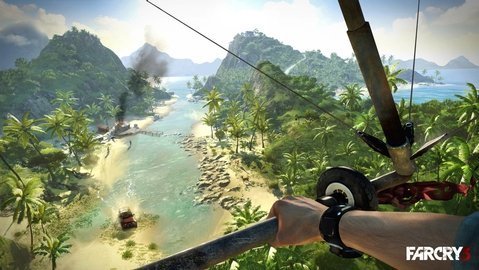 NEW YORK — Gamers bored of the drab, gray dungeonlike settings that seem to have become vogue in the first-person shooter genre may, at first glance, be refreshed by the luscious tropical landscapes of "Far Cry 3" (Ubisoft).

Be warned, however — this island paradise is not what it seems.

From its inception in 2004, the "Far Cry" series has become well-known for its excellent graphics and fun, open-world gameplay. On such aesthetic and technical counts, at least, the latest entry in the franchise succeeds. But it fails to provide a decent story line or, more importantly, a morally acceptable narrative.

The gamer plays Jason Brody, a rich American yuppie skydiving with his friends on an unnamed Pacific island and partying to excess.

Unbeknownst to the rich 1-percenters, the tropical getaway has been taken over by aggressive slave traders. They’re led by a bizarre, Mohawk-sporting villain named Vaas. Vaas, we discover, likes to swear, laugh at his own jokes and wax lyrical about what it means to be insane.

After Vaas and his confederates ensnare the visiting revelers, Jason alone manages to escape. By allying himself with the locals of the island — a tribe called the Rakyat — Jason hopes to spring his companions and get revenge on their captors.

Much of the hype involved in the release of "Far Cry 3" was based on the promise that, instead of playing a hardened killer, gamers would be in control of a character unused to death. Naturally reluctant to take life, Jason would face challenging moral decisions.

This plays out as advertised in the first hour or so. Thus, early on, Jason apologizes profusely to an enemy combatant he has stabbed in the neck. Within only a short amount of time, though, such behavior is cast by the wayside. From there on in, with only momentary exceptions, Jason’s missions involve ever-increasing body counts.

At times his token remorse appears absurdly random: After unleashing a barrage of bullets and rockets and knifing untold numbers of opponents, the death of one or another enemy unaccountably causes Jason to pause in his rampage, look at his hands, and moan, "What have I become?" These mini-pangs of conscience are easily overcome, however, and the gruesome slaughter continues.

Lost in all the mayhem is Jason’s original goal of liberating his friends, and the potentially interesting issue of when — and according to what rules — the lives of wrongdoers might be taken in pursuit of that laudable end.

In addition to the excessive bloodletting, Jason’s involvement with the worship of the native gods — he takes hallucinogenics in the hope that they will endow him with the Rakyat warrior spirit — is another source of concern.

Throw in some tasteless sex scenes and an ending in which the player has the option of cutting the throat of an entirely innocent woman prisoner, and it becomes all too clear that this title is a far cry from anything resembling agreeable electronic entertainment.