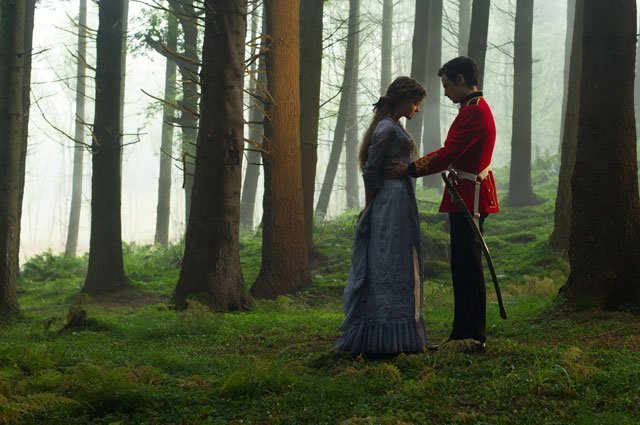 Carey Mulligan and Tom Sturridge star in a scene from the movie "'Far From the Madding Crowd." The Catholic News Service classification is A-II -- adults and adolescents. The Motion Picture Association of America rating is PG-13 -- parents strongly cautioned. Some material may be inappropriate for children under 13.
By Joseph McAleer
Catholic News Service
NEW YORK (CNS) — Thomas Hardy’s 1874 novel about romantic entanglements in the English countryside returns to the big screen in "Far from the Madding Crowd" (Fox).
In this fourth film adaptation of the classic work, director Thomas Vinterberg aims squarely at the "Downton Abbey" fan base while remaining faithful to his source. A top-rank cast, lush cinematography and high drama — both above and below stairs — combine into a treat that’s suitable for teens as well as grownups.
The setting is England’s bucolic West Country, some 200 miles away from the "madding" — that is, frenzied — population of London. Life may be quieter along the Dorset coast but the living is also hard, as shepherds tend their sheep and farmers hope for a good harvest.
At the heart of the story is Bathsheba Everdene (Carey Mulligan). This proto-feminist is spunky and independent-minded. She casts Victorian conventions aside, speaking freely and joining in the farm work on the homestead of the aunt (Tilly Vosburgh) and uncle with whom she lives.
Gabriel Oak (Matthias Schoenaerts), a kindly shepherd, admires Bathsheba’s spirit. He impulsively proposes marriage, but she turns him down.
"I’d hate to be someone’s property," Bathsheba confesses. "I shouldn’t mind being a bride at a wedding, if I could be one without having a husband."
Famous last words, of course. But before any further romantic complications set in, Bathsheba’s world is turned upside down by an entirely different kind of development.
Her uncle dies and leaves her his land, along with the family fortune. Suddenly Bathsheba is a powerful woman in a world run by men, but she’s determined to make her own way.
"It is my intention to astonish you all," the new boss tells her bewildered staff.
As she achieves success, matters of the heart resurface in a big way. Suddenly Bathsheba, who seemed destined for spinsterhood, has not one, but three suitors.
First, Gabriel — who has suffered financial reverses and come down in the world — returns to the scene when Bathsheba hires him to tend her sheep. Gabriel still carries a huge torch for Bathsheba, but now assumes the role of her guardian angel.
Second, there’s William Boldwood (Michael Sheen), a "mature" bachelor who owns the neighboring farm. Prosperous but lonely, Boldwood sees marriage to Bathsheba as his last chance to acquire the wife and family for which he longs.
Last but not least, a cad is thrown into the mix: Frank Troy (Tom Sturridge), an army sergeant with a questionable past. Dashing in his red uniform and handy with a sword, he awakens previously unknown feelings in Bathsheba.
Whom — if any — of these candidates will our heroine choose? Suffice it to say, there are many twists and turns in store, with a lesson in true love and commitment thrown in for good measure.
The film contains brief violence, some sensuality and a single disturbing image. The Catholic News Service classification is A-II — adults and adolescents. The Motion Picture Association of America rating is PG-13 — parents strongly cautioned. Some material may be inappropriate for children under 13.
– – –
McAleer is a guest reviewer for Catholic News Service.
Copyright © 2023 Catholic News Service, Inc. All rights reserved. Linking is encouraged, but republishing or redistributing, including by framing or similar means, without the publisher's prior written permission is prohibited.