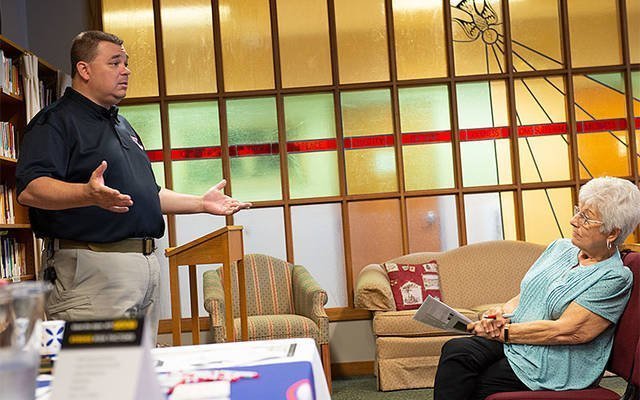 Madeline Colombo listens to Chief Brian Wiedman of Perinton Ambulance talk about strokes during a June 27 workshop at Church of the Assumption in Fairport. (Courier photo by John Haeger)

FAIRPORT — Strokes are the fifth leading cause of death in the United States, according to the American Stroke Association.

This fact prompted the health ministry at Church of Assumption to host a workshop for parishioners this summer about the importance of recognizing the signs and symptoms of stroke.

“The main purpose of bringing in speakers is to educate (parishioners),” said Julie Overbeck, who, along with Jackie DeLaus and Annette Indovina, oversee the parish’s health ministry.

An ischemic stroke occurs when a blood vessel supplying blood to the brain is obstructed, such as by a blood clot. Ischemic strokes account for 87 percent of all strokes, according to information on the American Stroke Association’s website. Transient ischemic attacks, referred to as TIAs or mini-strokes, are warning strokes and should be taken seriously, Wiedman said.

A hemorrhagic stroke occurs when a weakened blood vessel ruptures. According to the American Stroke Association, the two types of weakened blood vessels that usually cause hemorrhagic stroke are aneurysms and arteriovenous malformations. The association describes an arteriovenous malformation as a tangle of blood vessels in the brain that bypasses normal brain tissue and diverts blood from arteries to the veins. AVMs affect less than 1 percent of the general population and are typically congenital.

It is critical to get immediate medical attention if you think you may be having a stroke, Wiedman said. Immediate treatment not only could prevent death, he noted, but also may minimize the long-term effects of a stroke.

Wiedman also stressed the importance of stroke identification, since different types of strokes require different treatments. For example, he said that treating a clot stroke as if it were a bleeding stroke could actually make the situation worse. He and Sardone noted that CT scans and MRIs are the methods used to identify strokes.

To help with stroke identification in the field, Wiedman said that in June Perinton Ambulance acquired use of the University of Rochester’s mobile stroke unit. This unit allows a stroke patient to receive a scan en route to the hospital in order to receive better and faster treatment. The mobile unit serves all of Monroe County.

Although there are different treatments for different types of strokes, stroke assessment is the same, Wiedman said.

He noted that people can use the acronym “F.A.S.T.” to spot the signs of a stroke — face drooping, arm weakness, speech difficulty and time to call 911. Other stroke symptoms, according to the stroke association, are numbness, confusion, trouble seeing, trouble walking and severe headache.

Debbie Sharp, who attended the stroke workshop, told the Catholic Courier that she had foot surgery in 1999 and consequently was on medication and lying around quite a bit. As a result, she suffered from a blood clot in her lungs that resulted in a stroke.

“I survived it. I am very lucky to be here. I thank God every day,” Sharp said.

Sardone noted that in the past, stroke care happened after a person such as Sharp had a stroke, because there was nothing that could be done to treat patients during.

“Now there’s a lot of things we can do,” she said.