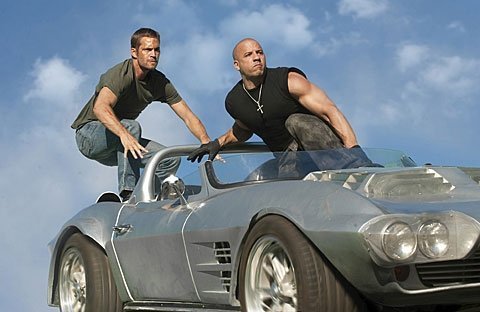 NEW YORK (CNS) — No one watches the "The Fast and the Furious" franchise for plot nuances and sparkling dialogue, and on that score, "Fast Five" (Universal) is true to form.

So what’s new this time? There’s an all-star cast, combining actors from the previous four films; it’s set in Rio de Janeiro; and the villains are a corrupt Brazilian police chief (Joaquim de Almeida) and his henchmen, who together operate a multimillion-dollar drug ring.

Other than that, director Justin Lin and screenwriter Chris Morgan keep the pace pleasantly and predictably speedy, with occasional comedic dialogue to indicate that no one is taking the proceedings all that seriously. It’s a theme-park ride of a movie, with muscle cars.

As the engines rev up, Brian O’Conner (Paul Walker), a former police officer, "rescues" convicted thief Dom Toretto (Vin Diesel) from the bus taking him to a state prison. From there, the duo winds up south of the border — way south — in the self-proclaimed "Marvelous City."

Their goal: Steal millions in ill-gotten gains from the police boss, utilizing skills that range from high-tech skullduggery to amazing driving techniques.

Hot on their trail, however, is federal agent Luke Hobbs (Dwayne Johnson), who has considerable street-fighting abilities of his own.

Dom, by the way, is shown to be Catholic; he wears a cross and on one occasion blesses himself. Needless to say, he’s hardly a poster child for the faith, but he does express a firm set of family values, and is quite well-grounded, considering his chosen profession.

The film contains much gun and physical violence, a premarital pregnancy, a few instances of profanity, frequent crude and crass language, and fleeting sexual banter. The Catholic News Service classification is A-III — adults. The Motion Picture Association of America rating is PG-13 — parents strongly cautioned. Some material may be inappropriate for children under 13.