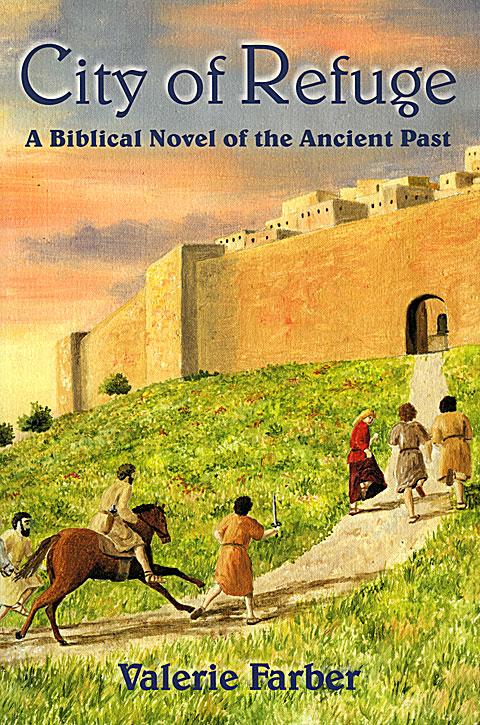 "We had successfully infiltrated Gat, observed an ironsmith, hoping to be able to reproduce his work, and purchased iron weapons. We imagined how happy our master, Shraya, would be. We had to open the sealed crate, and look at the weapons once more. Once the crate was opened, we challenged each other to a trial of marksmanship," testified the sturdy, likable Yerachmiel about his own youthful carelessness which led to another youth’s death.

Duty, honor and truth form the background to many anxious moments in City of Refuge, a fast-paced story appropriate to a wide variety of ages. Readers will come to genuinely like the many admirable characters, even when they own up to their own foibles. "’I’m so sorry,’ Tzuriel’s subdued voice could barely be heard. ‘I was careless for a moment and my negligence killed Eliav,’" Tzuriel bravely declares, fully aware of the consequences of his testimony.

Set in the formative years of the Israelite settlement in the Promised Land, City of Refuge focuses on the tightknit village life of individuals and families and their faithfulness to their covenant relationship with God, even when challenged by Canaanite religious practices.

Author Valerie Farber has a keen interest in educating readers on the daily life of ancient Israel, describing in detail their work: "The initial stage in weaving cloth was to prepare the warp, the vertical set of threads, on a warping board, and then attach the warp to the loom. After the warping stage, the horizontal rows, called the weft, could be woven into the warp one by one." Such details, rather than boring the reader or leading the narrative off course, enrich the excellent character development, as we witness the duties and skills given to each person.

Farber brings out the importance that religious tradition held for each individual, including for Canaanites with their fertility festivals, which included violence and even murder to appease their gods. The real struggle of the book’s many Israelite heroes was not to become independent individuals, as it would be in today’s world, but to faithfully observe the religious duties and values of ancient Israel, serving their family as fathers and sons, wives and daughters, and as they reached the age of betrothal and marriage.

For example, Bat-Schachar’s struggle, as the daughter of wealthy and prominent village priest Tzaddok, centers on how to resist the arranged marriage to a man who disgusts her, yet respect and honor her father. Bat-Schachar’s rebellious personality endears her to readers, as Farber skillfully weaves this with the naivete of being a protected village daughter who has hardly stepped out of the walls of her home. She is led astray by Basmat, the Canaanite servant of the family, leading to the betrothal annulment and to strong condemnation by the whole village, including, for a time, her sometimes hapless scholar father.

City of Refuge portrays the small world of the chosen people, as Yerachmiel and his friend Tzuriel struggle to become blacksmiths by stealing the iron secrets of their enemies. Such knowledge is vital in making weaponry strong enough to defend Israel, but their ambitions are not only to serve themselves but to their nation, village, betrotheds and families.

City of Refuge reminds the reader that, contrary to what current pop culture teaches, we cannot love humanity without first loving our families, friends, villages and nations, and the traditions that bind these together.

Welter is a freelance contributor to The B.C. Catholic, the newspaper of the Archdiocese of Vancouver, British Columbia, and is studying for his doctorate in systematic theology.