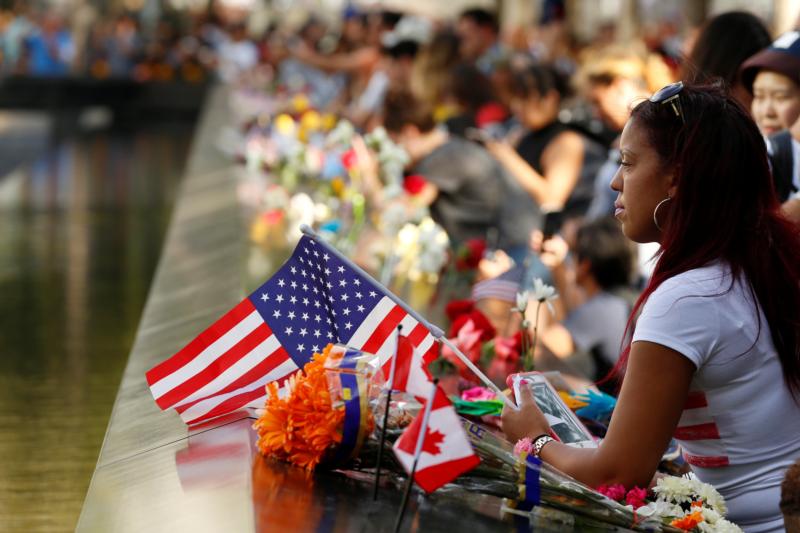 A woman holds a flag as she looks out over the National September 11 Memorial and Museum on the 15th anniversary of the 9/11 attacks in New York.

Yet he has vivid memories of watching television with his mother that day as news channels frequently replayed footage of the second plane hitting the World Trade Center in New York City. What’s more, he believes the events that took place that day have played a significant and lasting role in his life.

“Those events most surely shaped who I am today,” according to Bonko, a student at the University of Rochester.

Bonko is not the only young adult to take this view of 9/11. Both Mike Pernot, youth and young-adult minister at St. Paul Parish in Webster, and Vicky Rippel, associate director of formation at Pittsford’s Church of the Transfiguration, believe the terrorist attacks are partly responsible for their interest in ministry. And a 2009 study published in the Journal of Traumatic Stress found that social benefits such as increased religiousness, political engagement and pro-social behavior are among the benefits that can come from traumatic events such as the 2001 terrorist attacks.

Although Bonko did not completely understand the events of 9/11 until several years later, he still was gripped by an immediate desire to help defend his country. He hoped to join the military when he grew up, and although a health problem prevented him from doing so, he is majoring in mechanical engineering at the University of Rochester and hopes to enter into the defense industry upon his graduation in 2017.

Several years after the attacks Bonko’s mother took her children to Ground Zero in New York City, and it was only then that Bonko started to understand the significance of Sept. 11, 2001, he recalled. The visit also spurred in him a desire to learn more about what led to the events of that day.

“It has made me realize that one needs to understand the underlying causes of what happened, why there is all of the unrest,” he said. “(Now) I truly want to understand underlying problems in my daily life before I go about solving them.”

Sept. 11, 2001, also inspired Pernot to learn more. He was 10 years old when America was attacked, and he remembers watching coverage of the attacks in his fifth-grade classroom at Neil Armstrong Elementary School in Gates. He remained calm while he was in school, although he was very concerned for the safety of his uncle, who worked in the Pentagon. Jammed phone lines prevented his family from finding out his uncle was safe until much later that evening, and it wasn’t until Pernot got home from school and talked to his parents that the enormity of the day’s events started to sink in.

“I remember it hitting me around 4 (p.m.). I cried and tried to understand why people would want to hurt so many other people,” he recalled.

Pernot continued to grapple with that question even as American citizens came together with “grand displays of patriotism … peace and love” in the days following the attacks, he said.

“I started searching my faith for answers. That exploration led me to eventually major in psychology and religious studies at Nazareth. These two disciplines do try to answer ‘why’ questions, something I found existentially calming,” said Pernot, noting that his studies of psychology and religion also have been beneficial to his career in ministry as well as his current pursuit of a master’s degree in mental-health counseling from SUNY Brockport.

Rippel was 14 in September 2001, yet like Pernot, the events of that month had a profound impact on her career choice. She was in study hall when she learned of the attacks, and she and her classmates gathered around a teacher’s computer to watch news coverage of the devastation.

Rippel said she, like many others in America and throughout the world, went through a grieving process of sorts in the days and weeks following the attacks. Rippel became so sad she couldn’t watch footage of the attacks anymore, yet coverage of the international response to the attacks showed her how interconnected she and all Americans were to the rest of the world. Some time later she attended a retreat where she learned of the Catholic Church’s teachings on social justice and was moved to consider a career in public service or ministry. She doesn’t believe the retreat would have had such a profound effect on her if she hadn’t already realized that for many people around the globe, life after Sept. 11, 2001, would never be the same.

“I think (9/11) had a huge impact on my processing (things) and my drive to want to make the world better. It gave me a deeper desire to understand why people do the things they do,” she said.