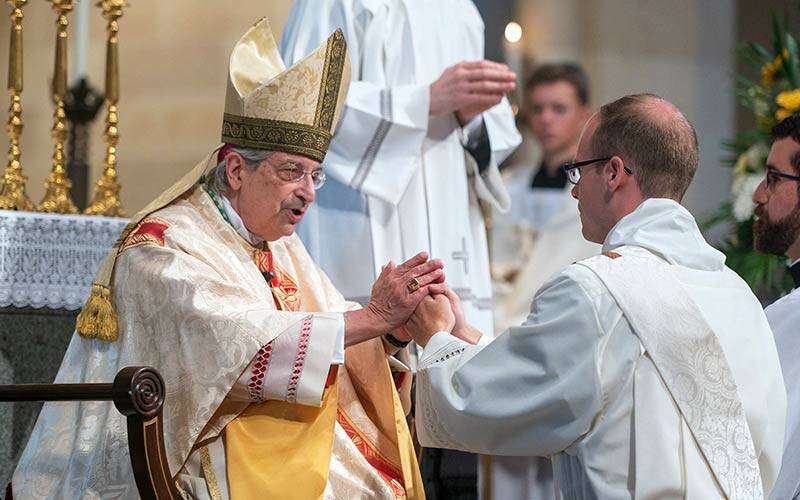 New priest ordained for the Diocese of Rochester

ROCHESTER — A vocational call that first surfaced in second grade, and never wavered, has now been answered in full by Father Aaron Kelly.

Father Kelly’s 20-year pursuit of the priesthood was realized on the morning of July 2, when Bishop Salvatore R. Matano ordained him at Sacred Heart Cathedral.

“Amazing” is how Father Kelly described his feelings as he exchanged hugs and handshakes and gave blessings to a long line of well-wishers for about an hour after the ordination Mass ended. He added that the day was everything he had hoped it would be — and more.

Even as a child, Father Kelly wanted to be a priest

Father Kelly’s happiness was shared by many family members, friends, clergy and other Catholics, including his parents, Jeffrey and Kimberly.

“I feel awesome,” his father added. “I couldn’t ask for anything better.”

Father Kelly’s parents recalled that their son showed an unusually strong interest in the priesthood as a young child, saying he was fond of “playing Mass” with his sisters, Abigail and Emma. As the years went on, however, it became clear to them that he wasn’t simply going through a childhood phase.

Father Kelly, who turned 27 on May 21, entered seminary right after graduating from Horseheads High School in 2013. He spent two years at Cathedral Seminary House of Formation and St. John’s University in New York City and three years at Theological College at Catholic University of America in Washington, D.C. He attended Pontifical North American College in Rome beginning in 2018, earning a baccalaureate degree in sacred theology in 2021. Father Kelly spent the past year at Pontifical Gregorian University, also in Rome, and is due to receive his licentiate in canon law from that school in 2024.

Father Kelly was due to celebrate his first Mass as a priest on Sunday, July 3, at 2 p.m. at St. Jerome Church in East Rochester. He will then celebrate all weekend Masses July 9-10 at All Saints Parish in Corning, followed by a summer assignment at Rochester’s Peace of Christ Parish and the diocesan Tribunal. He also will celebrate the 10:30 a.m. liturgy on Sept. 18 at St. Mary Our Mother Church in Horseheads before returning to Rome for his final two years of studies.

Looking forward to celebrating the sacraments and preaching

Father Kelly said he’s looking forward to celebrating the sacraments, particularly reconciliation, and having more opportunities to preach — “to truly be able to break open the word for people, to give them something that they can take with them throughout the week, throughout the day, and to really kind of provide this message of hope that we have to offer.”

Father Kelly, who was the only priest ordained for the Diocese of Rochester this year, added that he plans to continually emphasize the importance of strong, faith-filled families. By cultivating such families, he said, “vocations will naturally flow from that.”

Looking back on the spiritual path that led to his own priestly vocation, Father Kelly said that the Sunday readings for June 26 and July 3 — and their themes of following Jesus and spreading his word — are highly fitting for the odyssey he’s experienced.

That constancy has existed for two straight decades, he added: “I can’t think of a time at this point when I haven’t wanted to be a priest, or felt called to be a priest.”

Yet now that’s he actually been ordained a priest, Father Kelly said it’s still hard for him to grasp that the moment has finally arrived.

“It hasn’t caught up to me yet, this whole ‘Father’ business,” he said with a laugh after the ordination Mass. “It’s going to take some time to sink in.”