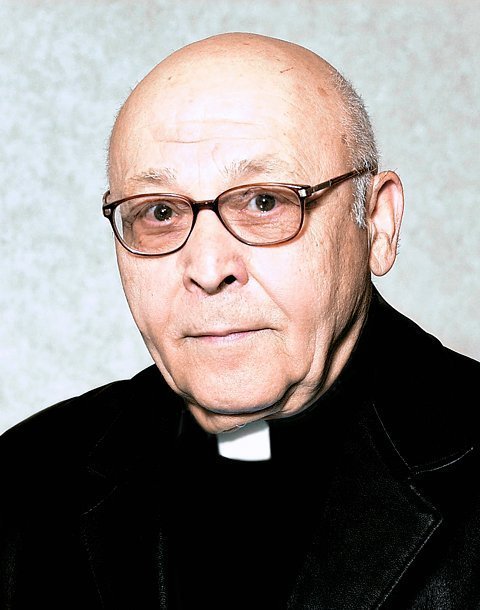 Father Anthony Calimeri, a diocesan priest for nearly 69 years, died Feb. 25, 2016, at the Sisters of St. Joseph Motherhouse in Pittsford after a long illness. He was 93 years old.

Father Calimeri’s first priestly assignment was as assistant pastor of Rochester’s St. Francis of Assisi Parish from 1947-51. He served in the same capacity at St. Jerome in East Rochester (1951-57), St. Anne in Palmyra (1957) and St. Patrick in Rochester (1957-63). He was elevated to the pastorate of St. Patrick beginning in 1963. During his years at that parish, he learned the Spanish language so as to better minister to a Puerto Rican population that had begun moving into the city.

In 1965, Father Calimeri became pastor of St. Jerome, remaining in East Rochester for the next 18 years. That’s where Father William Leone, assistant pastor at St. Jerome from 1977-80, began his association with Father Calimeri that evolved into a longtime friendship.

In 1983, Father Calimeri became pastor of St. Francis Parish in Phelps. He also became administrator of St. Felix in Clifton Springs in 1991 when it was clustered with St. Francis.

Along with his parish assignments, from 1967-69 Father Calimeri was director of the diocesan Spanish Apostolate. He also taught Spanish for several years at the former St. Bernard’s Seminary; served on the diocesan Presbyteral Council; was chaplain of the Monroe County Catholic War Veterans unit; and spent two decades as chaplain for Rochester’s Sisters of Guadalupe missionaries.

Father Calimeri was assigned to senior priest status in 1993. For many ensuing years he busied himself by assisting Father Leone while he was pastor of St. Patrick, Cato; St. John, Port Byron; and St. Joseph, Weedsport.

"The people grew to love him. He’d say at the end of Mass, ‘It’s been a pleasure,’ and they loved that," Father Leone recalled.

Father Calimeri affirmed his pleasure in a 2007 Catholic Courier article: "Dealing with people, it’s just been beautiful," he said. "In 60 years, I’ve met a large group of interesting and very friendly people."

For the last several years he resided at the Sisters of St. Joseph Motherhouse.

Father Calimeri is survived by his sister, Helen Napoli, and several nieces, nephews, great-nieces and great-nephews.

Calling hours will be Sunday, Feb. 28, from 3 to 5 p.m. at the Sisters of St. Joseph Motherhouse, 150 French Road, Pittsford. Solemn Vespers will take place at 4 p.m. that day with Bishop Salvatore R. Matano presiding. Father Calimeri will lie in state at the motherhouse Monday, Feb. 29, from 9 to 10 a.m., with his funeral Mass to be celebrated by Bishop Matano beginning at 10:30 a.m.