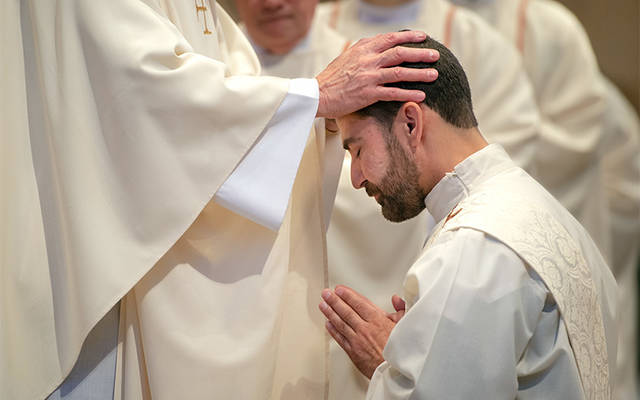 Diocesan priests lay their hands on the head of Father Jeff Chichester during the ordination Mass June 2 at Sacred Heart Cathedral. (Courier photo by Jeff Witherow) 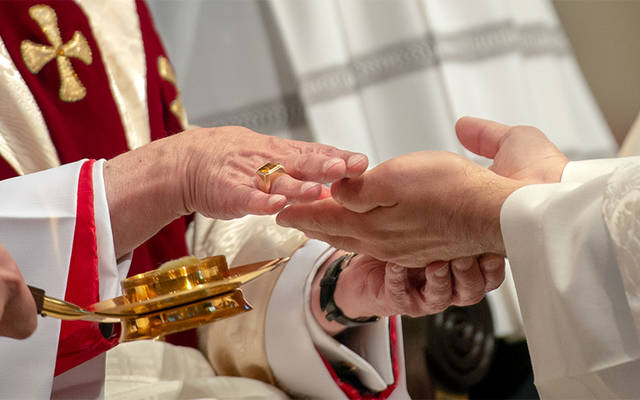 ROCHESTER — Even though he had been preparing for the day for several years, Father Jeff Chichester was still having trouble grasping the fact he’d actually just been ordained a priest.

“I feel ecstatic. It’s such a surreal experience,” exclaimed a beaming Father Chichester following his ordination June 2 Mass at Sacred Heart Cathedral. “As many ordinations as I’ve been to, actually being ordained is beyond anything I could ever imagine. It’s very humbling.”

Father Chichester, 43, was ordained by Bishop Salvatore R. Matano, who also served as homilist for the two-hour liturgy.

The event’s importance was underscored during the Rite of Ordination, when Bishop Matano formally elected then-Deacon Chichester for ordination and the congregation showed its consent — in the form of a long ovation that grew louder and louder, with many well-wishers rising to their feet.

Father Chichester said that his personal highlights from the Mass included music from the diocesan choir, which he described as “just fantastic,” as well as “the prayerful support of all the people who were here, as well as those who wanted to be here and couldn’t be.” He noted that a busload of people traveled north to the Mass from his home parish of St. Luke the Evangelist in Livingston County, and that additional supporters were on hand from parishes around the diocese at which he has served while preparing for the priesthood. Father Chichester’s mother, Elaine, also served as lector for the Mass (his father, David, passed away in 2014), and several family members brought up the gifts.

As soon as Mass concluded, many priests, deacons and laypeople stepped forward to exchange greetings and receive blessings from the newly ordained priest. And he was more than happy to oblige, greeting his flock with a nonstop stream of smiles, hugs and handshakes.

His ordination marked the culmination of a lengthy spiritual journey for Father Chichester, whose original career path did not involve a religious vocation. He was born in New Jersey and attended high school in Pennsylvania before he and his family settled in Mount Morris, where he became a member of St. Luke the Evangelist Parish. Father Chichester earned a bachelor’s degree in biology in 2006 from SUNY Geneseo, and then worked from 2006-10 as a nature preserver at Beaver Meadows Audubon Center in North Java, Wyoming County. However, acting on a growing belief that he was being called by God to a priestly vocation, he began formally discerning the priesthood in 2011.

After serving his pastoral year of 2015-16 at St. Mary and Ss. Mary and Martha parishes in Auburn, Father Chichester was ordained a transitional deacon by Bishop Matano in May of 2017. Earlier this spring, he completed his final year of seminary at Theological College in Washington, D.C.

Fewer than 24 hours after his ordination, Father Chichester was due to preside at his first Mass on June 3 — the Solemnity of the Most Holy Body and Blood of Christ — in his home church of St. Patrick in Mount Morris. That liturgy was to be followed by a luncheon at the St. Luke parish center at St. Mary Church in Geneseo. Later in June, Father Chichester is due to begin his first priestly assignment at St. Joseph and Holy Spirit parishes in Penfield, where he will serve as parochial vicar.

“It’s a point of fulfillment, something I’ve been looking forward to for a long time,” Father Chichester said of his ordination. “With a lot of prayers, and God willing, I’ll hopefully serve the church well for many years to come.”